Critical Windows of Prenatal Exposure to Cadmium and Size at Birth

Although Japan has been considered to have little lead (Pb) pollution in modern times, the actual pollution situation is unclear. The present study aims to investigate the extent of Pb pollution and to identify the pollution sources in Japan using stable Pb isotope analysis with kidneys of wild rats. Wild brown (Rattus norvegicus, n = 43) and black (R. rattus, n = 98) rats were trapped from various sites in Japan. Mean Pb concentrations in the kidneys of rats from Okinawa (15.58 mg/kg, dry weight), Aichi (10.83), Niigata (10.62), Fukuoka (8.09), Ibaraki (5.06), Kyoto (4.58), Osaka (4.57), Kanagawa (3.42), and Tokyo (3.40) were above the threshold (2.50) for histological kidney changes. Similarly, compared with the previous report, it was regarded that even structural and functional kidney damage as well as neurotoxicity have spread among rats in Japan. Additionally, the possibility of human exposure to a high level of Pb was assumed. In regard to stable Pb isotope analysis, distinctive values of stable Pb isotope ratios (Pb-IRs) were detected in some kidney samples with Pb levels above 5.0 mg/kg. This result indicated that composite factors are involved in Pb pollution. However, the identification of a concrete pollution source has not been accomplished due to limited differences among previously reported values of Pb isotope composition in circulating Pb products. Namely, the current study established the limit of Pb isotope analysis for source identification. Further detailed research about monitoring Pb pollution in Japan and the demonstration of a novel method to identify Pb sources are needed. View Full-Text
Keywords: metal contamination; wild rodent; stable Pb isotope; source identification; developed country metal contamination; wild rodent; stable Pb isotope; source identification; developed country
►▼ Show Figures 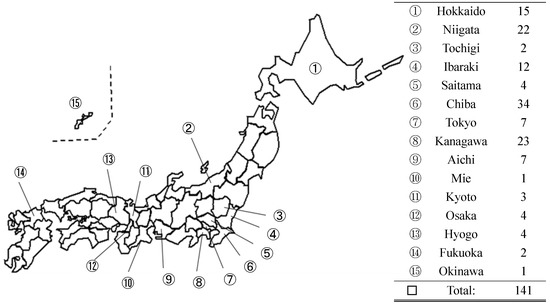