Understanding the Influence of Environment on Adults’ Walking Experiences: A Meta-Synthesis Study

Background: The aim of the present study was to compare the efficacy of interferon (IFN) with or without different nucleos(t)ide analogues (NAs). Methods: The PubMed, Wan Fang and CNKI databases were searched to identify relevant trials up to May 2015. Meta-analysis was performed with Review Manager 5.0. The stability and reliability were evaluated by publication bias tests. Results: Fifty-six studies fulfilled the criteria for the meta-analysis. Compared with IFN monotherapy, combination therapy were superior in HBV DNA undetectable rate (Risk Ratio (RR) = 1.55, 95% confidence interval (CI): 1.44–1.66, p < 0.00001), HBeAg and HBsAg loss rate (RR = 1.38, 95% CI: 1.22–1.56, p < 0.00001; RR = 1.69, 95% CI: 1.03–2.78, p = 0.04, respectively) at the end of week 48 treatment. Sub-analysis showed the RRs of virological response for entecavir (ETV), adefovir (ADV), and lamivudine (LAM) were 1.64, 1.61 and 1.52, respectively; RRs of HBeAg loss rate were 1.34, 1.71 and 1.34, respectively. However, at the end of follow-up, IFN plus NAs therapy was better than IFN monotherapy only in terms of HBV DNA undetectable rate (p = 0.0007). Conclusions: Combination therapy was better than IFN monotherapy in virological and serological responses at the end of treatment. After follow-up, only HBV DNA undetectable rate was superior for combination therapy. View Full-Text
Keywords: chronic hepatitis B; nucleos(t)ide analogues; interferon; combination therapy; meta-analysis chronic hepatitis B; nucleos(t)ide analogues; interferon; combination therapy; meta-analysis
►▼ Show Figures 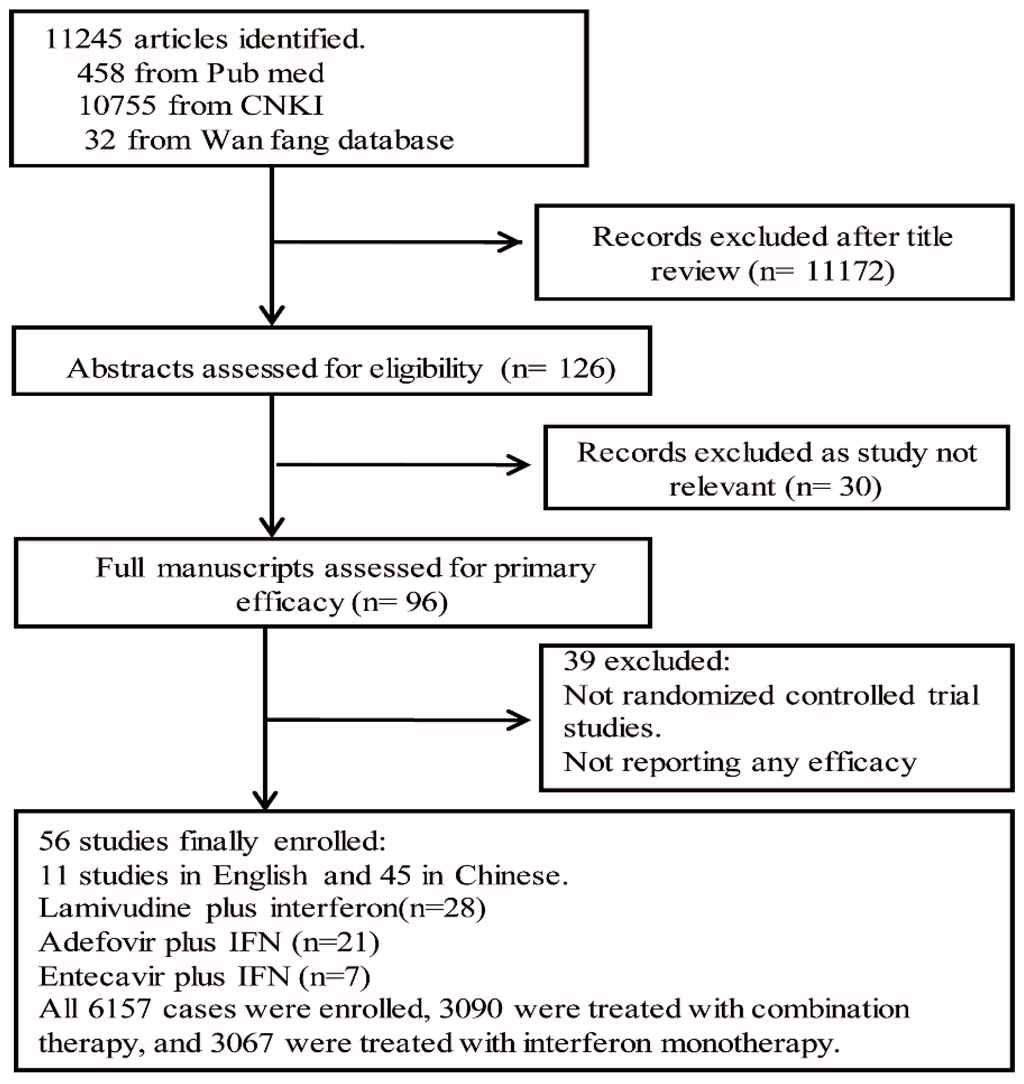 
Zhou, Jialing, Xiaoning Wu, Wei Wei, Hong You, Jidong Jia, and Yuanyuan Kong. 2016. "A Meta-Analysis of the Efficacy of Interferon Monotherapy or Combined with Different Nucleos(t)ide Analogues for Chronic Hepatitis B" International Journal of Environmental Research and Public Health 13, no. 7: 730. https://doi.org/10.3390/ijerph13070730