Background: Point-of-sale (POS) tobacco advertising has been linked to youth smoking susceptibility and experimental smoking. However, there is limited evidence of the association between POS advertising bans and youth smoking participation. This study aims to examine how such bans are associated with current smoking, daily smoking, and regular smoking (≥1 cigarettes per day) participation among youth. Methods: one to two waves (primarily one wave) of the Global Youth Tobacco Survey were conducted in 130 countries between 2007 and 2011. These surveys were linked to the WHO “MPOWER” data using country and year identifiers to analyze the association between POS advertising bans (a dichotomous measure of the existence of such bans) and smoking participation in the past month. Weighted logistic regressions were employed to analyze this association while controlling for age, gender, parents’ smoking status, 6 MPOWER policy scores, and GDP per capita. Results and Conclusions: We find that in countries with POS advertising bans, current smoking (OR = 0.73, p ≤ 0.1), daily smoking (OR = 0.70, p ≤ 0.1), and regular smoking (OR = 0.75, p ≤ 0.05) participation in the past month is significantly lower, suggesting that POS promotion bans can potentially reduce youth smoking. This study provides evidence to support the implementation of POS promotion regulations by the US FDA and implementation of the WHO FCTC guidelines regarding restrictions on tobacco POS promotion. View Full-Text
Keywords: point-of-sale advertising ban; experimental smoking; youth; global youth tobacco survey; MPOWER point-of-sale advertising ban; experimental smoking; youth; global youth tobacco survey; MPOWER
►▼ Show Figures 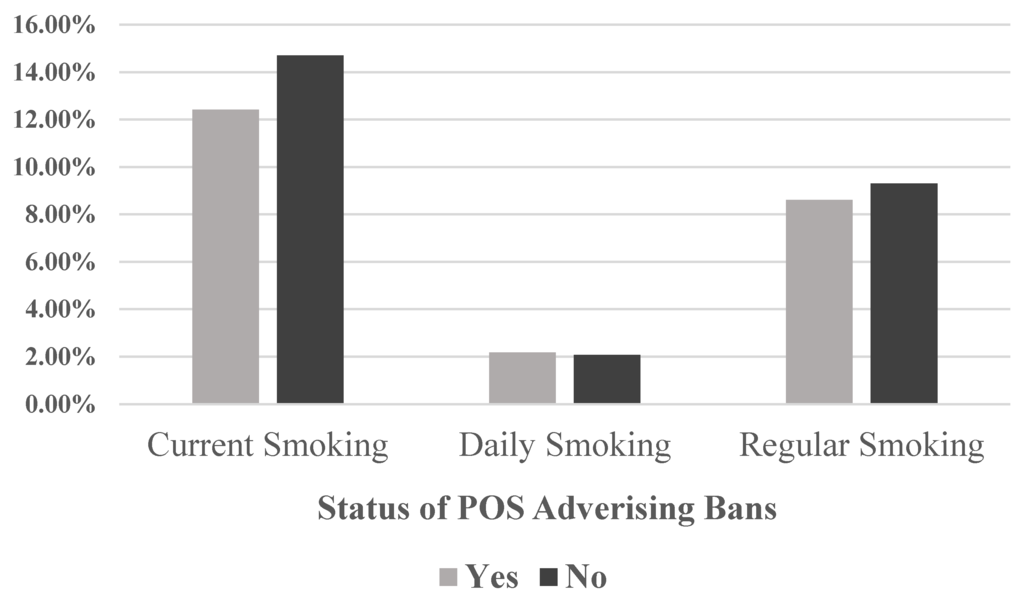