National heatwave plans are aimed at reducing the avoidable human health consequences due to heatwaves, by providing warnings as well as improving communication between relevant stakeholders. The objective of this study was to assess the perceptions of key stakeholders within plans in Belgium and The Netherlands on their responsibilities, the partnerships, and the effectiveness of the local implementation in Brussels and Amsterdam. Key informant interviews were held with stakeholders that had an important role in development of the heatwave plan in these countries, or its implementation in Brussels or Amsterdam. Care organisations, including hospitals and elderly care organisations, had a lack of familiarity with the national heatwave plan in both cities, and prioritised heat the lowest. Some groups of individuals, specifically socially isolated individuals, are not sufficiently addressed by the current national heatwave plans and most local plans. Stakeholders reported that responsibilities were not clearly described and that the national plan does not describe tasks on a local level. We recommend to urgently increase awareness on the impact of heat on health among care organisations. More emphasis needs to be given to the variety of heat-risk groups. Stakeholders should be involved in the development of updates of the plans. View Full-Text
Keywords: heatwaves; health protection; perception; key informant interviews heatwaves; health protection; perception; key informant interviews
►▼ Show Figures 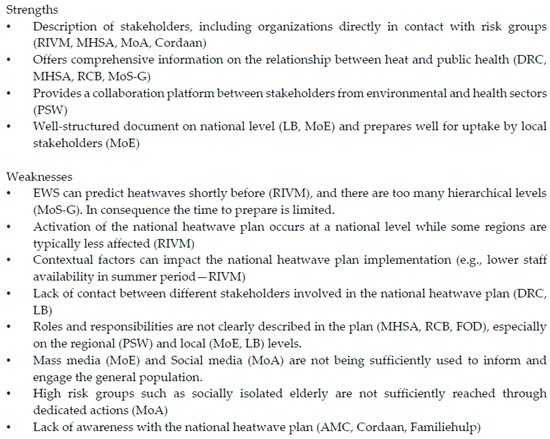