Asthma is a chronic disease that is particularly common in children. The association between polymorphisms of the gene encoding intercellular adhesion molecule 1 (ICAM1) and gene-environment interactions with childhood asthma has not been fully investigated. A cross-sectional study was undertaken to investigate these associations among children in Taiwan. The effects of two functional single-nucleotide polymorphisms (SNPs) of ICAM1, rs5491 (K56M) and rs5498 (K469E), and exposure to environmental tobacco smoke (ETS) were studied. Two hundred and eighteen asthmatic and 877 nonasthmatic children were recruited from elementary schools. It was found that the genetic effect of each SNP was modified by the other SNP and by exposure to ETS. The risk of asthma was higher for children carrying the rs5491 AT or TT genotypes and the rs5498 GG genotype (odds ratio = 1.68, 95% confidence interval 1.09–2.59) than for those with the rs5491 AA and rs5498 AA or AG genotypes (the reference group). The risk for the other two combinations of genotypes did not differ significantly from that of the reference group (p of interaction = 0.0063). The two studied ICAM1 SNPs were associated with childhood asthma among children exposed to ETS, but not among those without ETS exposure (p of interaction = 0.05 and 0.01 for rs5491 and rs5498, respectively). Both ICAM1 and ETS, and interactions between these two factors are likely to be involved in the development of asthma in childhood. View Full-Text
Keywords: ICAM1; environmental smoke exposure; childhood asthma ICAM1; environmental smoke exposure; childhood asthma
►▼ Show Figures 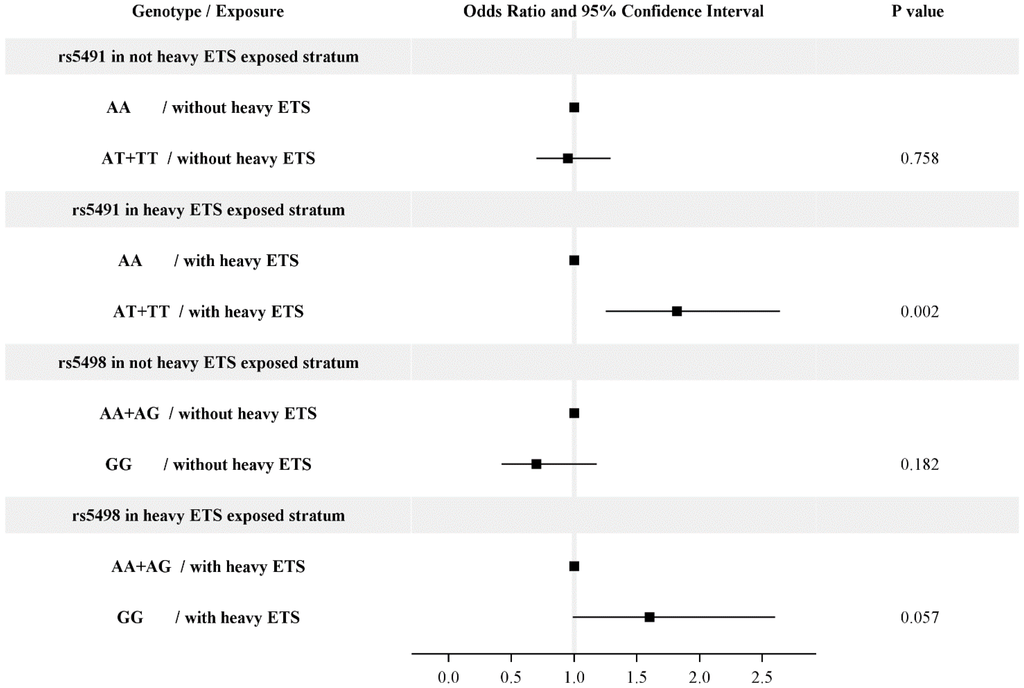