Kinins and Their Receptors in Infectious Diseases
Previous Article in Journal

Kinins (peptides related to bradykinin, BK) are formed from circulating substrates, the kininogens, by the action of two proteases, the kallikreins. The only clinical application of a BK receptor ligand, the B2 receptor antagonist icatibant, is the treatment of the rare hereditary angioedema (HAE) caused by the deficiency of C1-esterase inhibitor (C1-INH). Less common forms of HAE (genetic variants of factor XII, plasminogen, kininogen) are presumably mediated by increased BK formation. Acquired forms of BK-mediated angioedema, such as that associated with angiotensin-I converting enzyme (ACE) inhibition, are also known. Antibody-based analytical techniques are briefly reviewed, and support that kinins are extremely short-lived, prominently cleared by ACE. Despite evidence of continuous activation of the kallikrein–kinin system in HAE, patients are not symptomatic most of the time and their blood or plasma obtained during remission does not generate excessive immunoreactive BK (iBK), suggesting effective homeostatic mechanisms. HAE-C1-INH and HAE-FXII plasmas are both hyperresponsive to fibrinolysis activation. On another hand, we suggested a role for the alternate tissue kallikrein–kinin system in patients with a plasminogen mutation. The role of the BK B1 receptor is still uncertain in angioedema states. iBK profiles under in vitro stimulation provide fresh insight into the physiopathology of angioedema. View Full-Text
Keywords: hereditary angioedema; bradykinin; acquired angioedema; kallikrein–kinin system; analytical techniques for kinins hereditary angioedema; bradykinin; acquired angioedema; kallikrein–kinin system; analytical techniques for kinins
►▼ Show Figures 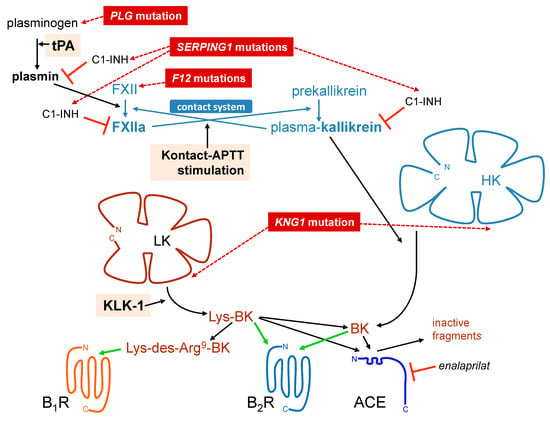