Michał Szcześniak
Faculty of Mechatronics and Aerospace, Military University of Technology, Warsaw 00-908, Poland
*
Author to whom correspondence should be addressed.
†
This is paper is an extended version of the paper: “Olejnik, A.; Rogólski, R.; Kiszkowiak, Ł.; Szcześniak, M.: Specific Problems of Selecting and Integrating Equipment Components in the Course of Developing a Technology Demonstrator for the mini-UAV” published in Proceedings of the 2019 IEEE International Workshop on Metrology for Aerospace, Torino, Italy–June 19–21, 2019; pp. 284–289; specified in the References as item 3.
Sensors 2020, 20(6), 1752; https://doi.org/10.3390/s20061752
Received: 31 December 2019 / Revised: 6 March 2020 / Accepted: 16 March 2020 / Published: 21 March 2020
(This article belongs to the Special Issue Selected papers from the 2019 IEEE International Workshop on Metrology for AeroSpace)
View Full-Text Download PDF
Browse Figures
Review Reports Cite This Paper

The article is a development of the topic generally presented in the conference proceedings issued after the 2019 IEEE International Workshop on Metrology for Aerospace. In contrast to topics presented in the conference, the article describes in detail avionic equipment and on-board systems integration process and their in-flight adjustment in regard to the newly designed miniature unmanned aerial vehicle (mini-UAV). The mini-airplane was constructed and assembled in the course of the research project, the purpose of which was to show implementation of a totally new mini-UAV design. The intention of the work was to develop a new unmanned system including an originally constructed small airplane with elements purchased from open market. Such approach should allow to construct a new aerial unmanned system, which technologically would not be very advanced but should be easy to use and relatively inexpensive. The demonstrator mini-airplane has equipment typical for such an object, i.e., electric propulsion, autopilot system, camera head and parachute device for recovery. The key efforts in the project were taken to elaborate an original but easy to use system, to integrate subsystem elements and test them so to prove their functionality and reliability. View Full-Text
Keywords: miniature UAV; autopilot; on-board sensors; miniature propulsion miniature UAV; autopilot; on-board sensors; miniature propulsion
►▼ Show Figures 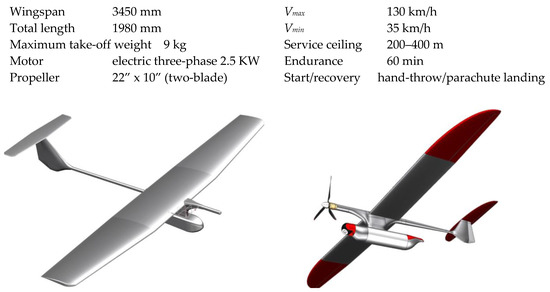