Disentangling the Contribution of Spatial Reference Frames to Executive Functioning in Healthy and Pathological Aging: An Experimental Study with Virtual Reality

The geomagnetic storm, which is an abnormal space weather phenomenon, can sometimes severely affect GPS signal propagation, thereby impacting the performance of GPS precise point positioning (PPP). However, the investigation of GPS PPP accuracy over the global scale under different geomagnetic storm conditions is very limited. This paper for the first time presents the performance of GPS dual-frequency (DF) and single-frequency (SF) PPP under moderate, intense, and super storms conditions during solar cycle 24 using a large data set collected from about 500 international GNSS services (IGS) stations. The global root mean square (RMS) maps of GPS PPP results show that stations with degraded performance are mainly distributed at high-latitude, and the degradation level generally depends on the storm intensity. The three-dimensional (3D) RMS of GPS DF PPP for high-latitude during moderate, intense, and super storms are 0.393 m, 0.680 m and 1.051 m, respectively, with respect to only 0.163 m on quiet day. RMS errors of mid- and low-latitudes show less dependence on the storm intensities, with values less than 0.320 m, compared to 0.153 m on quiet day. Compared with DF PPP, the performance of GPS SF PPP is inferior regardless of quiet or disturbed conditions. The degraded performance of GPS positioning during geomagnetic storms is attributed to the increased ionospheric disturbances, which have been confirmed by our global rate of TEC index (ROTI) maps. Ionospheric disturbances not only lead to the deteriorated ionospheric correction but also to the frequent cycle-slip occurrence. Statistical results show that, compared with that on quiet day, the increased cycle-slip occurrence are 13.04%, 56.52%, and 69.57% under moderate, intense, and super storms conditions, respectively. View Full-Text
Keywords: geomagnetic storms; precise point positioning; ionospheric irregularities; rate of TEC index geomagnetic storms; precise point positioning; ionospheric irregularities; rate of TEC index
►▼ Show Figures 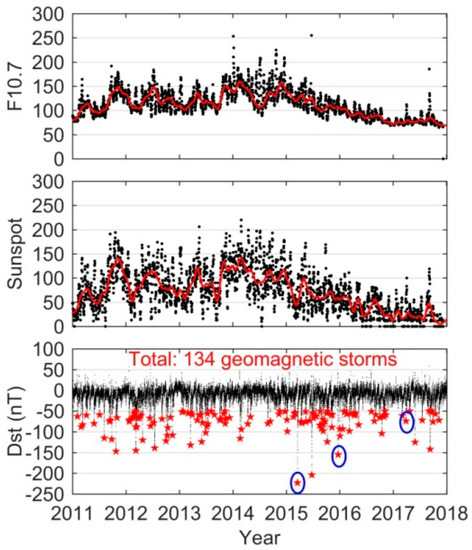