Comparison of Reflectance Measurements Acquired with a Contact Probe and an Integration Sphere: Implications for the Spectral Properties of Vegetation at a Leaf Level

Laboratory spectroscopy in visible and infrared regions is an important tool for studies dealing with plant ecophysiology and early recognition of plant stress due to changing environmental conditions. Leaf optical properties are typically acquired with a spectroradiometer coupled with an integration sphere (IS) in a laboratory or with a contact probe (CP), which has the advantage of operating flexibility and the provision of repetitive in-situ reflectance measurements. Experiments comparing reflectance spectra measured with different devices and device settings are rarely reported in literature. Thus, in our study we focused on a comparison of spectra collected with two ISs on identical samples ranging from a Spectralon and coloured papers as reference standards to vegetation samples with broadleaved (Nicotiana Rustica L.) and coniferous (Picea abies L. Karst.) leaf types. First, statistical measures such as mean absolute difference, median of differences, standard deviation and paired-sample t-test were applied in order to evaluate differences between collected reflectance values. The possibility of linear transformation between spectra was also tested. Moreover, correlation between normalised differential indexes (NDI) derived for each device and all combinations of wavelengths between 450 nm and 1800 nm were assessed. Finally, relationships between laboratory measured leaf compounds (total chlorophyll, carotenoids and water content), NDI and selected spectral indices often used in remote sensing were studied. The results showed differences between spectra acquired with different devices. While differences were negligible in the case of the Spectralon and they were possible to be modelled with a linear transformation in the case of coloured papers, the spectra collected with the CP and the ISs differed significantly in the case of vegetation samples. Regarding the spectral indices calculated from the reflectance data collected with the three devices, their mean values were in the range of the corresponding standard deviations in the case of broadleaved leaf type. Larger differences in optical leaf properties of spruce needles collected with the CP and ISs are implicated from the different measurement procedure due to needle-like leaf where shoots with spatially oriented needles were measured with the CP and individual needles with the IS. The study shows that a direct comparison between the spectra collected with two devices is not advisable as spectrally dependent offsets may likely exist. We propose that the future studies shall focus on standardisation of measurement procedures so that open access spectral libraries could serve as a reliable input for modelling of optical properties on a leaf level. View Full-Text
Keywords: broadleaved leaf; broadleaved plants; conifers; contact probe; integration sphere; needle; spectroradiometer; spectroscopy broadleaved leaf; broadleaved plants; conifers; contact probe; integration sphere; needle; spectroradiometer; spectroscopy
►▼ Show Figures 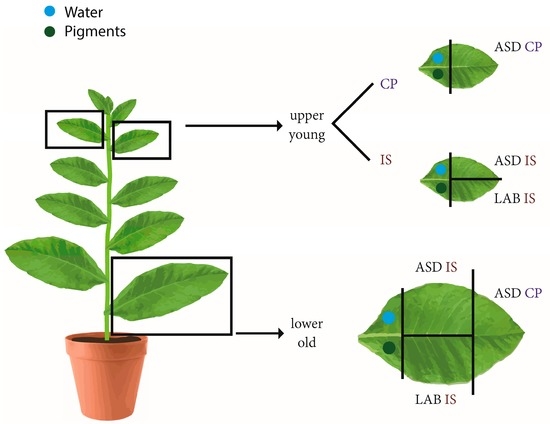