Driver assistance systems and autonomous robotics rely on the deployment of several sensors for environment perception. Compared to LiDAR systems, the inexpensive vision sensors can capture the 3D scene as perceived by a driver in terms of appearance and depth cues. Indeed, providing 3D image understanding capabilities to vehicles is an essential target in order to infer scene semantics in urban environments. One of the challenges that arises from the navigation task in naturalistic urban scenarios is the detection of road participants (e.g., cyclists, pedestrians and vehicles). In this regard, this paper tackles the detection and orientation estimation of cars, pedestrians and cyclists, employing the challenging and naturalistic KITTI images. This work proposes 3D-aware features computed from stereo color images in order to capture the appearance and depth peculiarities of the objects in road scenes. The successful part-based object detector, known as DPM, is extended to learn richer models from the 2.5D data (color and disparity), while also carrying out a detailed analysis of the training pipeline. A large set of experiments evaluate the proposals, and the best performing approach is ranked on the KITTI website. Indeed, this is the first work that reports results with stereo data for the KITTI object challenge, achieving increased detection ratios for the classes car and cyclist compared to a baseline DPM. View Full-Text
Keywords: 3D-aware features; object recognition; KITTI; DPM; stereo-vision 3D-aware features; object recognition; KITTI; DPM; stereo-vision
►▼ Show Figures 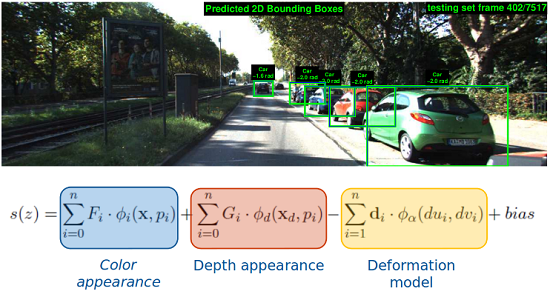