Immobilization Techniques in the Fabrication of Nanomaterial-Based Electrochemical Biosensors: A Review
Previous Article in Journal

Förster resonance energy transfer (FRET) technology has been widely used in biological and biomedical research. This powerful tool can elucidate protein interactions in either a dynamic or steady state. We recently developed a series of FRET-based technologies to determine protein interaction dissociation constant and for use in high-throughput screening assays of SUMOylation. SUMO (small ubiquitin-like modifier) is conjugated to substrates through an enzymatic cascade. This important posttranslational protein modification is critical for multiple biological processes. Sentrin/SUMO-specific proteases (SENPs) act as endopeptidases to process the pre-SUMO or as isopeptidases to deconjugate SUMO from its substrate. Here, we describe a novel quantitative FRET-based protease assay for determining the kinetics of SENP1. Our strategy is based on the quantitative analysis and differentiation of fluorescent emission signals at the FRET acceptor emission wavelengths. Those fluorescent emission signals consist of three components: the FRET signal and the fluorescent emissions of donor (CyPet) and acceptor (YPet). Unlike our previous method in which donor and acceptor direct emissions were excluded by standard curves, the three fluorescent emissions were determined quantitatively during the SENP digestion process from onesample. New mathematical algorithms were developed to determine digested substrate concentrations directly from the FRET signal and donor/acceptor direct emissions. The kinetic parameters, kcat, KM, and catalytic efficiency (kcat/KM) of SENP1 catalytic domain for pre-SUMO1/2/3 were derived. Importantly, the general principles of this new quantitative methodology of FRET-based protease kinetic determinations can be applied to other proteases in a robust and systems biology approach. View Full-Text
Keywords: quantitative FRET analysis; internal calibration; one-sample assay; protease kinetics; SENP quantitative FRET analysis; internal calibration; one-sample assay; protease kinetics; SENP
►▼ Show Figures 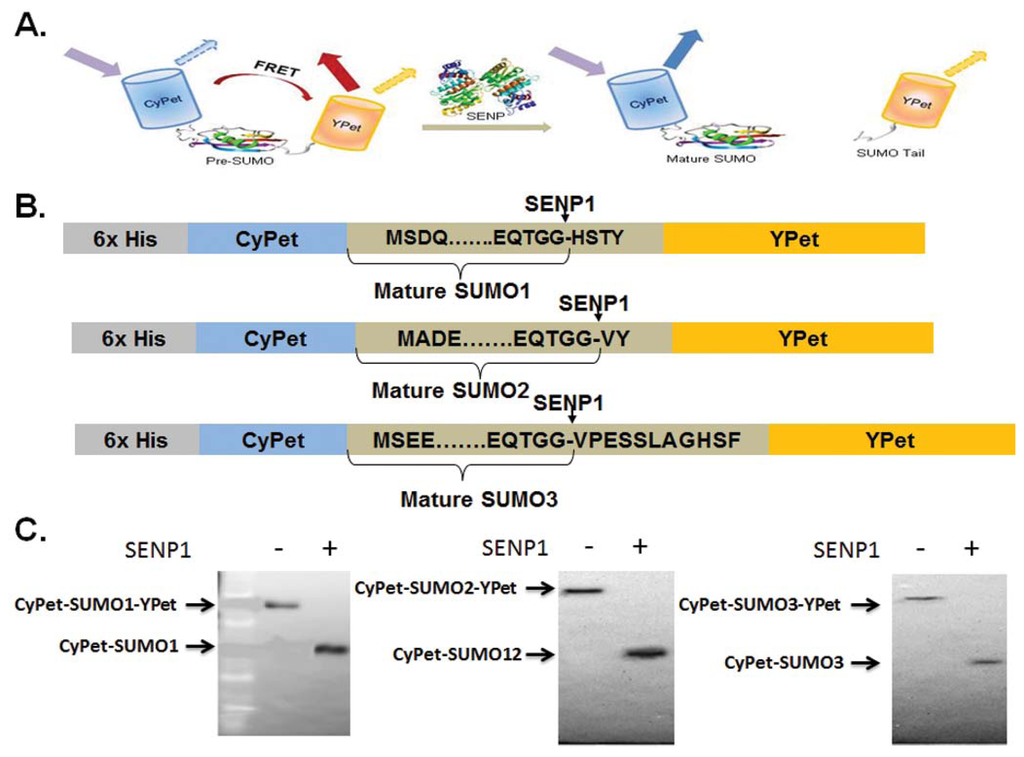