Mechanosensitive ion channels, Piezo1 and 2, are activated by pressure and involved in diverse physiological functions, including senses of touch and pain, proprioception and many more. Understanding their function is important for elucidating the mechanosensitive mechanisms of a range of human diseases. Recently, Piezo channels were suggested to be contributors to migraine pain generation. Migraine is typically characterized by allodynia and mechanical hyperalgesia associated with the activation and sensitization of trigeminal ganglion (TG) nerve fibers. Notably, migraine specific medicines are ineffective for other types of pain, suggesting a distinct underlying mechanism. To address, in a straightforward manner, the specificity of the mechanosensitivity of trigeminal vs. somatic nerves, we compared the activity of Piezo1 channels in mouse TG neurons vs. dorsal root ganglia (DRG) neurons. We assessed the functional expression of Piezo1 receptors using a conventional live calcium imaging setup equipped with a multibarrel application system and utilizing a microfluidic chip-based setup. Surprisingly, the TG neurons, despite higher expression of the Piezo1 gene, were less responsive to Piezo1 agonist Yoda1 than the DRG neurons. This difference was more prominent in the chip-based setup, suggesting that certain limitations of the conventional approach, such as turbulence, can be overcome by utilizing microfluidic devices with laminar solution flow. View Full-Text
Keywords: migraine; trigeminal; dorsal root; mechanosensitive receptors; Piezo1; calcium imaging; microfluidics migraine; trigeminal; dorsal root; mechanosensitive receptors; Piezo1; calcium imaging; microfluidics
►▼ Show Figures 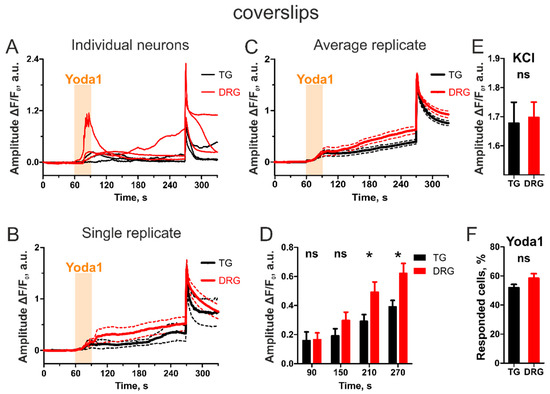