When the Balance Tips: Dysregulation of Mitochondrial Dynamics as a Culprit in Disease
Previous Article in Journal

Due to their short-range (2–500 nm), Auger electrons (Auger e−) have the potential to induce nano-scale physiochemical damage to biomolecules. Although DNA is the primary target of Auger e−, it remains challenging to maximize the interaction between Auger e− and DNA. To assess the DNA-damaging effect of Auger e− released as close as possible to DNA without chemical damage, we radio-synthesized no-carrier-added (n.c.a.) [189, 191Pt]cisplatin and evaluated both its in vitro properties and DNA-damaging effect. Cellular uptake, intracellular distribution, and DNA binding were investigated, and DNA double-strand breaks (DSBs) were evaluated by immunofluorescence staining of γH2AX and gel electrophoresis of plasmid DNA. Approximately 20% of intracellular radio-Pt was in a nucleus, and about 2% of intra-nucleus radio-Pt bound to DNA, although uptake of n.c.a. radio-cisplatin was low (0.6% incubated dose after 25-h incubation), resulting in the frequency of cells with γH2AX foci was low (1%). Nevertheless, some cells treated with radio-cisplatin had γH2AX aggregates unlike non-radioactive cisplatin. These findings suggest n.c.a. radio-cisplatin binding to DNA causes severe DSBs by the release of Auger e− very close to DNA without chemical damage by carriers. Efficient radio-drug delivery to DNA is necessary for successful clinical application of Auger e−. View Full-Text
Keywords: Auger electron; cisplatin; 191Pt; 189Pt; radio-drug; DNA double-strand break; γH2AX Auger electron; cisplatin; 191Pt; 189Pt; radio-drug; DNA double-strand break; γH2AX
►▼ Show Figures 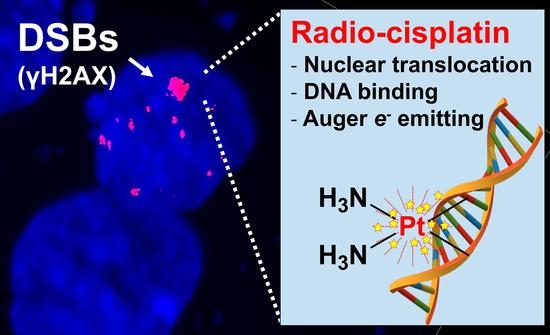