Eighteen previously undescribed trimethoprim (TMP) analogs containing amide bonds (1–18) were synthesized and compared with TMP, methotrexate (MTX), and netropsin (NT). These compounds were designed as potential minor groove binding agents (MGBAs) and inhibitors of human dihydrofolate reductase (hDHFR). The all-new derivatives were obtained via solid phase synthesis using 4-nitrophenyl Wang resin. Data from the ethidium displacement test confirmed their DNA-binding capacity. Compounds 13–14 (49.89% and 43.85%) and 17–18 (41.68% and 42.99%) showed a higher binding affinity to pBR322 plasmid than NT. The possibility of binding in a minor groove as well as determination of association constants were performed using calf thymus DNA, T4 coliphage DNA, poly (dA-dT)2, and poly (dG-dC)2. With the exception of compounds 9 (IC50 = 56.05 µM) and 11 (IC50 = 55.32 µM), all of the compounds showed better inhibitory properties against hDHFR than standard, which confirms that the addition of the amide bond into the TMP structures increases affinity towards hDHFR. Derivatives 2, 6, 13, 14, and 16 were found to be the most potent hDHFR inhibitors. This molecular modelling study shows that they interact strongly with a catalytically important residue Glu-30. View Full-Text
Keywords: trimethoprim; DHFR inhibitors; netropsin; MGBAs; drug design; molecular dynamics trimethoprim; DHFR inhibitors; netropsin; MGBAs; drug design; molecular dynamics
►▼ Show Figures 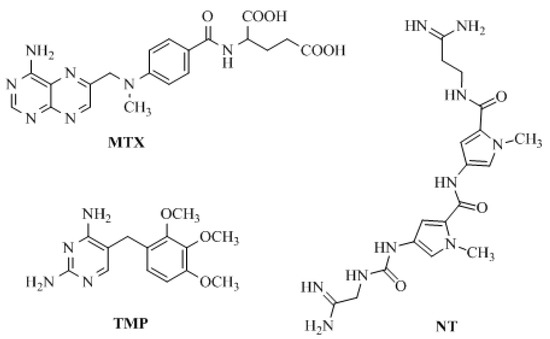