Periodic fasting (PF) is an increasingly popular approach that assists in the management of metabolic and inflammatory diseases as well as in preventing mechanisms involved in aging. However, little is known about the effects of fasting on gut microbiota and its impact on the epigenetic regulation of metabolically relevant enzymes, especially sirtuins (SIRTs). We analyzed the effect of periodic fasting on the human gut microbiota, SIRTs expression, and mitochondrial content in 51 males and females. The participants fasted under supervision for five consecutive days following the Buchinger fasting guidelines. Ketogenesis, selected mRNAs, miRNAs, mitochondrial (mt) DNA, and gut composition were analyzed before and after PF. PF triggered a significant switch in metabolism, as indicated by the increase in ß-hydroxybutyrate (BHB) and pyruvate dehydrogenase kinase isoform 4 (PDK4) expression in the capillary blood. MtDNA, SIRT1, SIRT3, and miRlet7b-5p expression in blood cells were elevated, whereas SIRT6 and miR125b-5p were not affected. Following fasting, gut microbiota diversity increased, and a statistically significant correlation between SIRT1 gene expression and the abundance of Prevotella and Lactobacillus was detected. The abundance of longevity related Christensenella species increased after fasting and inversely correlated with age as well as body mass index (BMI). Thus, this represents the first study that showing that fasting not only changes the composition of the gut microbiota, making it more diverse, but also affects SIRT expression in humans. View Full-Text
Keywords: Buchinger fasting; gut microbiota; sirtuin Buchinger fasting; gut microbiota; sirtuin
►▼ Show Figures 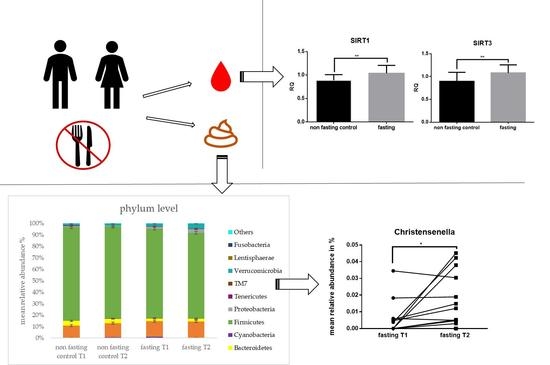