Mitochondrial Ceramide Effects on the Retinal Pigment Epithelium in Diabetes

Jason A. Smith
4 and

Diabetic retinopathy (DR), one of the leading causes of blindness, is mainly diagnosed based on the vascular pathology of the disease. Current treatment options largely focus on this aspect with mostly insufficient therapeutic long-term efficacy. Mounting evidence implicates mitochondrial dysfunction and oxidative stress in the central etiology of DR. Consequently, drug candidates that aim at normalizing mitochondrial function could be an attractive therapeutic approach. This study compared the mitoprotective compounds, idebenone and elamipretide, side-by-side against two novel short-chain quinones (SCQs) in a rat model of DR. The model effectively mimicked type 2 diabetes over 21 weeks. During this period, visual acuity was monitored by measuring optokinetic response (OKR). Vision loss occurred 5–8 weeks after the onset of hyperglycemia. After 10 weeks of hyperglycemia, visual function was reduced by 65%. From this point, the right eyes of the animals were topically treated once daily with the test compounds. The left, untreated eye served as an internal control. Only three weeks of topical treatment significantly restored vision from 35% to 58–80%, while visual acuity of the non-treated eyes continued to deteriorate. Interestingly, the two novel SCQs restored visual acuity better than idebenone or elamipretide. This was also reflected by protection of retinal pathology against oxidative damage, retinal ganglion cell loss, reactive gliosis, vascular leakage, and retinal thinning. Overall, mitoprotective and, in particular, SCQ-based compounds have the potential to be developed into effective and fast-acting drug candidates against DR. View Full-Text
Keywords: diabetic-retinopathy; mitochondria; idebenone; short-chain quinones; elamipretide diabetic-retinopathy; mitochondria; idebenone; short-chain quinones; elamipretide
►▼ Show Figures 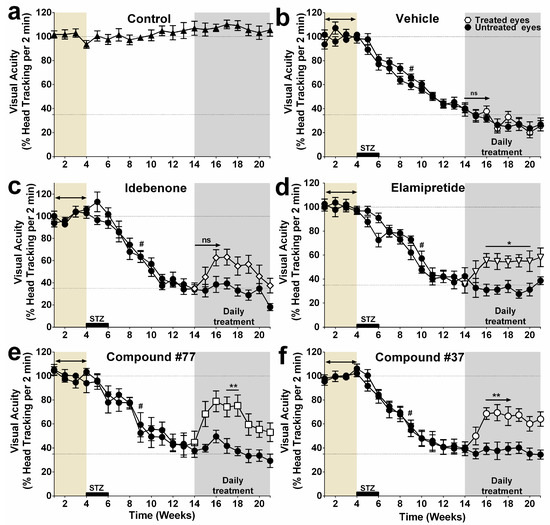