To investigate the retinal proteins associated with primary and secondary retinal ganglion cell (RGC) degeneration and explore their molecular pathways, SWATH label-free and target-based mass spectrometry was employed to identify the proteomes in various retinal locations in response to localized optic nerve injury. Unilateral partial optic nerve transection (pONT) was performed on adult Wistar rats and their retinas were harvested 2 weeks later. To confirm the separation of primary and secondary RGC degeneration, immunohistochemistry of RNA binding protein with multiple splicing (RBPMS) and glial fibrillary acidic protein (GFAP) was performed on retinal whole-mounts. Retinal proteomes in the temporal and nasal quadrants were evaluated with high resolution hybrid quadrupole time-of-flight mass spectrometry (QTOF-MS), and SWATH-based acquisition, and their expression was compared to the corresponding retinal quadrant in contralateral control eyes and further validated by multiple reaction monitoring mass spectrometry (MRM-MS). A total of 3641 proteins (FDR < 1%) were identified using QTOF-MS. The raw data are available via ProteomeXchange with the identifier PXD026783. Bioinformatics data analysis showed that there were 37 upregulated and 25 downregulated proteins in the temporal quadrant, whereas 20 and five proteins were upregulated and downregulated, respectively, in the nasal quadrant, respectively (n = 4, p < 0.05; fold change ≥ 1.4-fold or ≤0.7). Six proteins were regulated in both the temporal and the nasal quadrants, including CLU, GFAP, GNG5, IRF2BPL, L1CAM, and CPLX1. Linear regression analysis indicated a strong association between the data obtained by means of SWATH-MS and MRM-MS (temporal, R2 = 0.97; nasal, R2 = 0.96). Gene ontology analysis revealed statistically significant changes in the biological processes and cellular components of primary RGC degeneration. The majority of the significant changes in structural, signaling, and cell death proteins were associated with the loss of RGCs in the area of primary RGC degeneration. The combined use of SWATH-MS and MRM-MS methods detects and quantifies regional changes of retinal protein expressions after localized injury. Future investigation with this integrated approach will significantly increase the understanding of diverse processes of progressive RGC degeneration from a proteomic prospective. View Full-Text
Keywords: neurodegeneration; ganglion cell; optic nerve; protein; proteomics; mass spectrometry neurodegeneration; ganglion cell; optic nerve; protein; proteomics; mass spectrometry
►▼ Show Figures 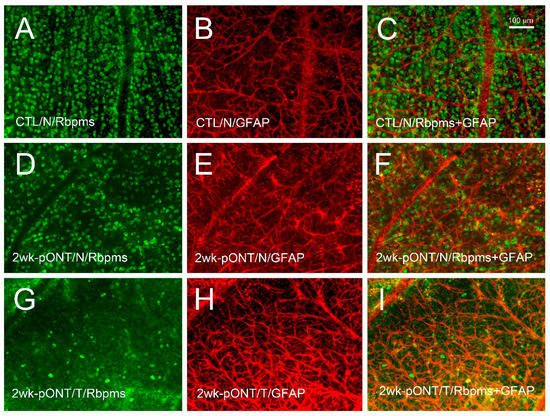