The Evolving Landscape of Exosomes in Neurodegenerative Diseases: Exosomes Characteristics and a Promising Role in Early Diagnosis
Previous Article in Journal

Nearly half of patients with advanced and metastatic melanomas harbor a BRAF mutation. Vemurafenib (VEM), a BRAF inhibitor, is used to treat such patients, however, responses to VEM are very short-lived due to intrinsic, adaptive and/or acquired resistance. In this context, we present the action of the B-Raf serine-threonine protein kinase inhibitor (vemurafenib) on the glycans structure and metallomics profiles in melanoma cells without (MeWo) and with (G-361) BRAF mutations. The studies were performed using α1-acid glycoprotein (AGP), a well-known acute-phase protein, and concanavalin A (Con A), which served as the model receptor. The detection of changes in the structure of glycans can be successfully carried out based on the frequency shifts and the charge transfer resistance after interaction of AGP with Con A in different VEM treatments using QCM-D and EIS measurements. These changes were also proved based on the cell ultrastructure examined by TEM and SEM. The LA-ICP-MS studies provided details on the metallomics profile in melanoma cells treated with and without VEM. The studies evidence that vemurafenib modifies the glycans structures and metallomics profile in melanoma cells harboring BRAF mutation that can be further implied in the resistance phenomenon. Therefore, our data opens a new avenue for further studies in the short-term addressing novel targets that hopefully can be used to improve the therapeutic regiment in advanced melanoma patients. The innovating potential of this study is fully credible and has a real impact on the global patient society suffering from advanced and metastatic melanomas. View Full-Text
Keywords: glycans structure; metallomics profile; melanoma cells with BRAF mutation; vemurafenib; α1-acid glycoprotein glycans structure; metallomics profile; melanoma cells with BRAF mutation; vemurafenib; α1-acid glycoprotein
►▼ Show Figures 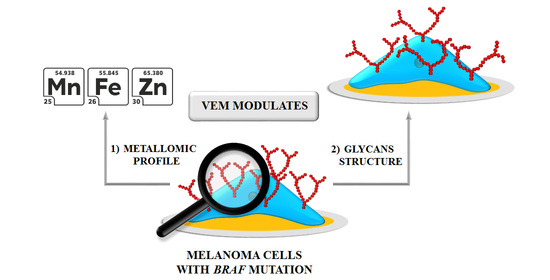