Exposure to Dichlorodiphenyldichloroethylene (DDE) and Metallothionein Levels in Rats Fed with Normocaloric or High-Fat Diet: A Review
Previous Article in Journal

Genetic markers have been used to assess the freezability of semen. With the advancement in molecular genetic techniques, it is possible to assess the relationships between sperm functions and gene polymorphisms. In this study, variant calling analysis of RNA-Seq datasets was used to identify single nucleotide polymorphisms (SNPs) in boar spermatozoa and to explore the associations between SNPs and post-thaw semen quality. Assessment of post-thaw sperm quality characteristics showed that 21 boars were considered as having good semen freezability (GSF), while 19 boars were classified as having poor semen freezability (PSF). Variant calling demonstrated that most of the polymorphisms (67%) detected in boar spermatozoa were at the 3’-untranslated regions (3’-UTRs). Analysis of SNP abundance in various functional gene categories showed that gene ontology (GO) terms were related to response to stress, motility, metabolism, reproduction, and embryo development. Genomic DNA was isolated from sperm samples of 40 boars. Forty SNPs were selected and genotyped, and several SNPs were significantly associated with motility and membrane integrity of frozen-thawed (FT) spermatozoa. Polymorphism in SCLT1 gene was associated with significantly higher motility and plasma membrane integrity of FT spermatozoa from boars of the GSF group compared with those of the PSF group. Likewise, polymorphisms in MAP3K20, MS4A2, and ROBO1 genes were significantly associated with reduced cryo-induced lipid peroxidation and DNA damage of FT spermatozoa from boars of the GSF group. Candidate genes with significant SNP associations, including APPL1, PLBD1, FBXO16, EML5, RAB3C, OXSR1, PRICKLE1, and MAP3K20 genes, represent potential markers for post-thaw semen quality, and they might be relevant for future improvement in the selection procedure of boars for cryopreservation. The findings of this study provide evidence indicating that polymorphisms in genes expressed in spermatozoa could be considered as factors associated with post-thaw semen quality. View Full-Text
Keywords: freezability; RNA-Seq; variant calling; genotype; SNPs freezability; RNA-Seq; variant calling; genotype; SNPs
►▼ Show Figures 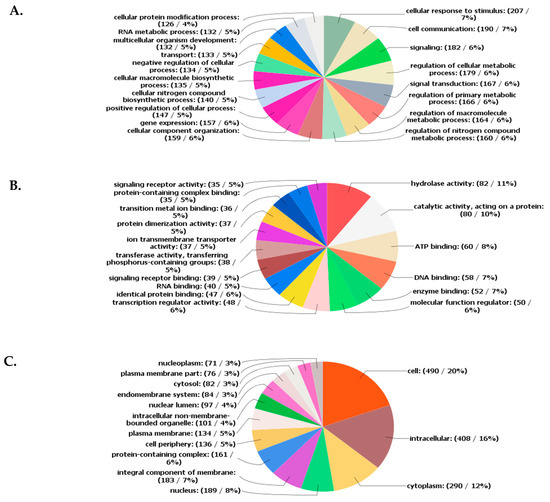