Accessibility of Cations to the Selectivity Filter of KcsA in the Inactivated State: An Equilibrium Binding Study
Next Article in Special Issue

Dendrobium catenatum, an epiphytic and lithophytic species, suffers frequently from perennial shortage of water in the wild. The molecular mechanisms of this orchid’s tolerance to abiotic stress, especially drought, remain largely unknown. It is well-known that CBL-interacting protein kinase (CIPKs) proteins play important roles in plant developmental processes, signal transduction, and responses to abiotic stress. To study the CIPKs’ functions for D. catenatum, we first identified 24 CIPK genes from it. We divided them into three subgroups, with varying intron numbers and protein motifs, based on phylogeny analysis. Expression patterns of CIPK family genes in different tissues and in response to either drought or cold stresses suggested DcaCIPK11 may be associated with signal transduction and energy metabolism. DcaCIPK9, -14, and -16 are predicted to play critical roles during drought treatment specifically. Furthermore, transcript expression abundances of DcaCIPK16 showed polar opposites during day and night. Whether under drought treatment or not, DcaCIPK16 tended to emphatically express transcript1 during the day and transcript3 at night. This implied that expression of the transcripts might be regulated by circadian rhythm. qRT-PCR analysis also indicated that DcaCIPK3, -8, and -20 were strongly influenced by circadian rhythmicity. In contrast with previous studies, for the first time to our knowledge, our study revealed that the major CIPK gene transcript expressed was not always the same and was affected by the biological clock, providing a different perspective on alternative splicing preference. View Full-Text
Keywords: alternative splicing; circadian rhythm; CIPK; Dendrobium catenatum; drought stress alternative splicing; circadian rhythm; CIPK; Dendrobium catenatum; drought stress
►▼ Show Figures 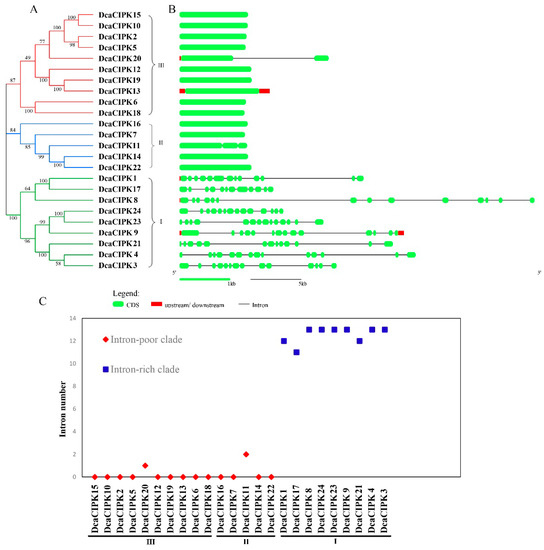