Although melatonin (N-acetyl-5-methoxytryptamine) could alleviate salinity stress in plants, the downstream signaling pathway is still not fully characterized. Here, we report that endogenous melatonin and thereafter nitric oxide (NO) accumulation was successively increased in NaCl-stressed rapeseed (Brassica napus L.) seedling roots. Application of melatonin and NO-releasing compound not only counteracted NaCl-induced seedling growth inhibition, but also reestablished redox and ion homeostasis, the latter of which are confirmed by the alleviation of reactive oxygen species overproduction, the decreases in thiobarbituric acid reactive substances production, and Na+/K+ ratio. Consistently, the related antioxidant defense genes, sodium hydrogen exchanger (NHX1), and salt overly sensitive 2 (SOS2) transcripts are modulated. The involvement S-nitrosylation, a redox-based posttranslational modification triggered by NO, is suggested. Further results show that in response to NaCl stress, the increased NO levels are strengthened by the addition of melatonin in seedling roots. Above responses are abolished by the removal of NO by NO scavenger. We further discover that the removal of NO does not alter endogenous melatonin content in roots supplemented with NaCl alone or together with melatonin, thus excluding the possibility of NO-triggered melatonin production. Genetic evidence reveals that, compared with wild-type Arabidopsis, the hypersensitivity to NaCl in nia1/2 and noa1 mutants (exhibiting null nitrate reductase activity and indirectly reduced endogenous NO level, respectively) cannot be rescued by melatonin supplementation. The reestablishment of redox homeostasis and induction of SOS signaling are not observed. In summary, above pharmacological, molecular, and genetic data conclude that NO operates downstream of melatonin promoting salinity tolerance. View Full-Text
Keywords: Arabidopsis; Brassica napus; ion homeostasis; melatonin; NaCl stress; nitric oxide; redox homeostasis Arabidopsis; Brassica napus; ion homeostasis; melatonin; NaCl stress; nitric oxide; redox homeostasis
►▼ Show Figures 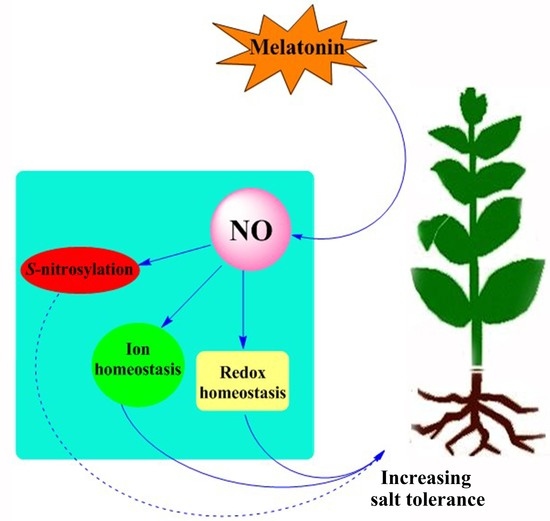