Conyza canadensis has been reported to be the most frequent weed species that evolved resistance to glyphosate in various parts of the world. The objective of the present study was to investigate the effect of environmental conditions (temperature and light) on the expression levels of the EPSPS gene and two major ABC-transporter genes (M10 and M11) on glyphosate susceptible (GS) and glyphosate resistant (GR) horseweed populations, collected from several regions across Greece. Real-time PCR was conducted to determine the expression level of the aforementioned genes when glyphosate was applied at normal (1×; 533 g·a.e.·ha−1) and high rates (4×, 8×), measured at an early one day after treatment (DAT) and a later stage (four DAT) of expression. Plants were exposed to light or dark conditions, at three temperature regimes (8, 25, 35 °C). GR plants were made sensitive when exposed to 8 °C with light; those sensitized plants behaved biochemically (shikimate accumulation) and molecularly (expression of EPSPS and ABC-genes) like the GS plants. Results from the current study show the direct link between the environmental conditions and the induction level of the above key genes that likely affect the efficiency of the proposed mechanism of glyphosate resistance. View Full-Text
Keywords: Conyza canadensis; glyphosate resistance; ABC-transporter genes; EPSPS; environmental factors Conyza canadensis; glyphosate resistance; ABC-transporter genes; EPSPS; environmental factors
►▼ Show Figures 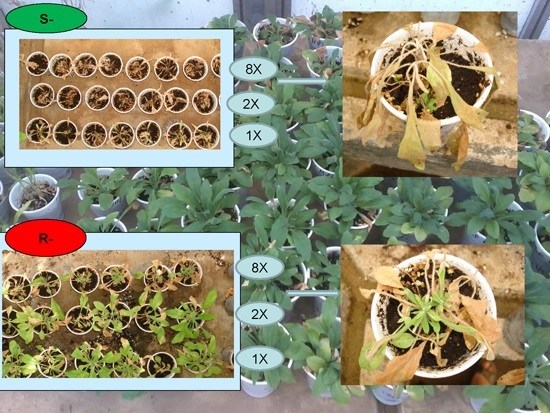