The Association between Polymorphism of INSR and Polycystic Ovary Syndrome: A Meta-Analysis
Previous Article in Journal

The accumulation and aggregation of misfolded proteins in the brain, such as amyloid-β (Aβ) and hyperphosphorylated tau, is a neuropathological hallmark of Alzheimer’s disease (AD). Previously, we developed and validated a novel non-human primate model for sporadic AD (sAD) research using intracerebroventricular administration of streptozotocin (icv STZ). To date, no characterization of AD-related genes in different brain regions has been performed. Therefore, in the current study, the expression of seven amyloid precursor protein (APP) pathway-related and five tau phosphorylation-related genes was investigated by quantitative real-time PCR experiments, using two matched-pair brain samples from control and icv STZ-treated cynomolgus monkeys. The genes showed similar expression patterns within the control and icv STZ-treated groups; however, marked differences in gene expression patterns were observed between the control and icv STZ-treated groups. Remarkably, other than β-secretase (BACE1) and cyclin-dependent kinase 5 (CDK5), all the genes tested showed similar expression patterns in AD models compared to controls, with increased levels in the precuneus and occipital cortex. However, significant changes in gene expression patterns were not detected in the frontal cortex, hippocampus, or posterior cingulate. Based on these results, we conclude that APP may be cleaved via the general metabolic mechanisms of increased α- and γ-secretase levels, and that hyperphosphorylation of tau could be mediated by elevated levels of tau protein kinase, specifically in the precuneus and occipital cortex. View Full-Text
Keywords: Alzheimer’s disease; streptosozocin; cynomolgus monkey; qPCR; APP; tau Alzheimer’s disease; streptosozocin; cynomolgus monkey; qPCR; APP; tau
►▼ Show Figures 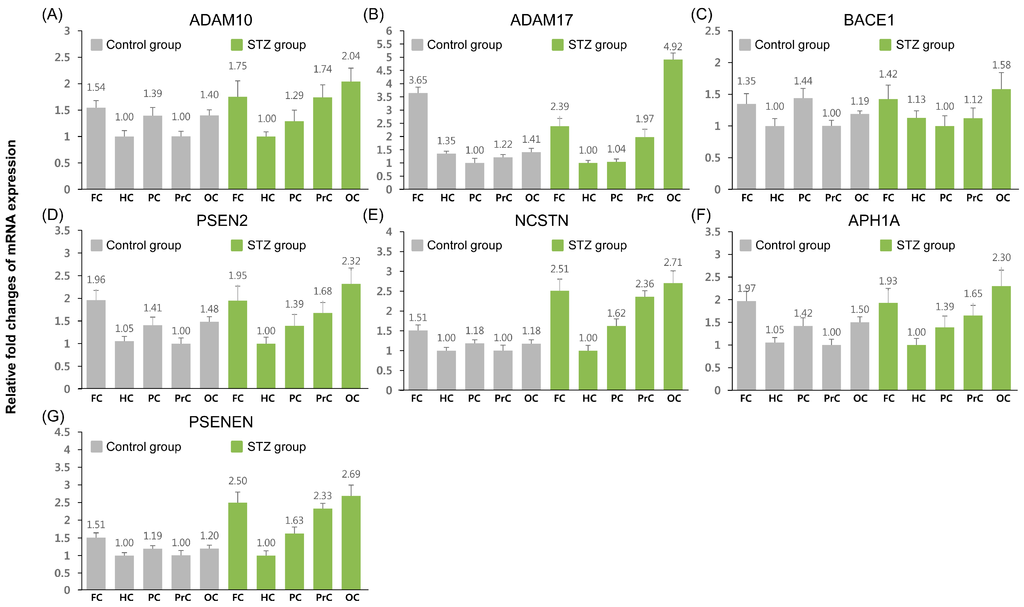