The purpose of the work was to study the impact of the endogenous nitric oxide synthase (NOS) inhibitor asymmetric dimethylarginine (ADMA) and its degrading enzyme, dimethylarginine dimethylaminohydrolase (DDAH1), on atherosclerosis in subtotally nephrectomized (SNX) ApoE-deficient mice. Male DDAH1 transgenic mice (TG, n = 39) and C57Bl/6J wild-type littermates (WT, n = 27) with or without the deletion of the ApoE gene underwent SNX at the age of eight weeks. Animals were sacrificed at 12 months of age, and blood chemistry, as well as the extent of atherosclerosis within the entire aorta were analyzed. Sham treated (no renal mass reduction) ApoE-competent DDAH1 transgenic and wild-type littermates (n = 11) served as a control group. Overexpression of DDAH1 was associated with significantly lower ADMA levels in all treatment groups. Surprisingly, SNX mice did not exhibit higher ADMA levels compared to sham treated control mice. Furthermore, the degree of atherosclerosis in ApoE-deficient mice with SNX was similar in mice with or without overexpression of DDAH1. Overexpression of the ADMA degrading enzyme, DDAH1, did not ameliorate atherosclerosis in ApoE-deficient SNX mice. Furthermore, SNX in mice had no impact on ADMA levels, suggesting a minor role of this molecule in chronic kidney disease (CKD) in this mouse model. View Full-Text
Keywords: ADMA; subtotal nephrectomy; atherosclerosis ADMA; subtotal nephrectomy; atherosclerosis
►▼ Show Figures 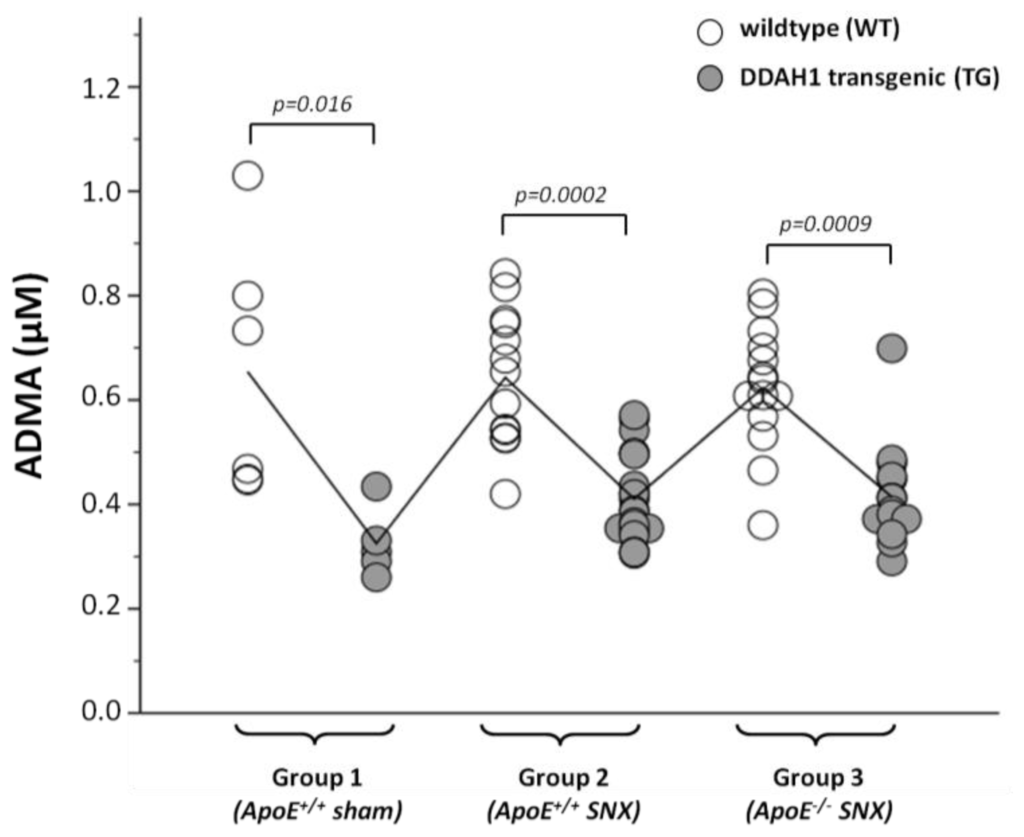