There has been a growing interest in naturally occurring compounds from traditional medicine with anti-cancer potential. Nigella sativa (black seed) is one of the most widely studied plants. This annual herb grows in countries bordering the Mediterranean Sea and India. Thymoquinone (TQ) is an active ingredient isolated from Nigella sativa. The anti-cancer effect of TQ, via the induction of apoptosis resulting from mitochondrial dysfunction, was assessed in an acute lymphocyte leukemic cell line (CEMss) with an IC50 of 1.5 µg/mL. A significant increase in chromatin condensation in the cell nucleus was observed using fluorescence analysis. The apoptosis was then confirmed by Annexin V and an increased number of cellular DNA breaks in treated cells were observed as a DNA ladder. Treatment of CEMss cells with TQ encouraged apoptosis with cell death-transducing signals by a down-regulation of Bcl-2 and up-regulation of Bax. Moreover, the significant generation of cellular ROS, HSP70 and activation of caspases 3 and 8 were also observed in the treated cells. The mitochondrial apoptosis was clearly associated with the S phase cell cycle arrest. In conclusion, the results from the current study indicated that TQ could be a promising agent for the treatment of leukemia. View Full-Text
Keywords: anticancer; apoptosis; mitochondria; thymoquinone; CEMss anticancer; apoptosis; mitochondria; thymoquinone; CEMss
►▼ Show Figures 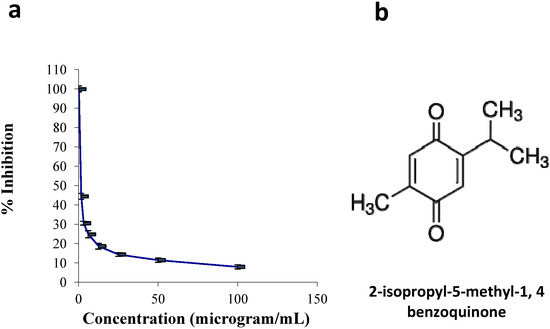