Representation Lost: The Case for a Relational Interpretation of Quantum Mechanics
Next Article in Special Issue

An Image Encryption Algorithm Based on Time-Delay and Random Insertion

An image encryption algorithm is presented in this paper based on a chaotic map. Different from traditional methods based on the permutation-diffusion structure, the keystream here depends on both secret keys and the pre-processed image. In particular, in the permutation stage, a middle parameter is designed to revise the outputs of the chaotic map, yielding a temporal delay phenomena. Then, diffusion operation is applied after a group of random numbers is inserted into the permuted image. Therefore, the gray distribution can be changed and is different from that of the plain-image. This insertion acts as a one-time pad. Moreover, the keystream for the diffusion operation is designed to be influenced by secret keys assigned in the permutation stage. As a result, the two stages are mixed together to strengthen entirety. Experimental tests also suggest that our algorithm, permutation– insertion–diffusion (PID), performs better when expecting secure communications for images. View Full-Text
Keywords: image encryption; time-delay; random insertion; information entropy; chaotic map image encryption; time-delay; random insertion; information entropy; chaotic map
►▼ Show Figures 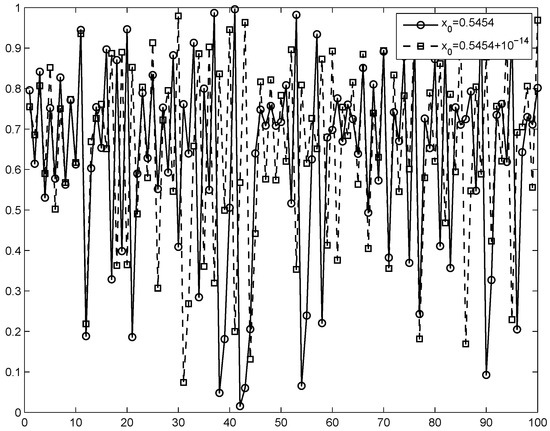