The Biodiversity of Saccharomyces cerevisiae in Spontaneous Wine Fermentation: The Occurrence and Persistence of Winery-Strains

Wine production by inoculated fermentation with commercial Saccharomyces cerevisiae strains is an ordinary practice in modern winemaking in order to assure the final quality of wine, although this procedure results in the production of highly homogeneous wines. The use of indigenous selected starters represents a useful tool to control alcoholic grape must fermentation, safeguarding the typical sensory characteristics of wine produced from specific regions. In this study, we selected three indigenous S. cerevisiae strains among 16 indigenous strains previously isolated from the spontaneous fermentation of Primitivo grapes, which were collected from the vineyards of three different cellars. The three selected starters (one for each cellar) were tested during fermentations at pilot scale by performing in each cellar two trials: one with an indigenous starter (specific for the winery), and one with the commercial starter AWRI796 (common to all the cellars). Starter dominance ability and influence on aromatic quality of the wine were used as criteria to test the suitability of these indigenous starters to be used at the cellar scale. The results obtained in this study showed that the indigenous strains were characterized by very high dominance ability, and the aromatic quality of wine was strongly influenced both by the inoculated strain and the interaction strain/grape must. View Full-Text
Keywords: Saccharomyces cerevisiae; indigenous strains; dominance level; wine aroma Saccharomyces cerevisiae; indigenous strains; dominance level; wine aroma
►▼ Show Figures 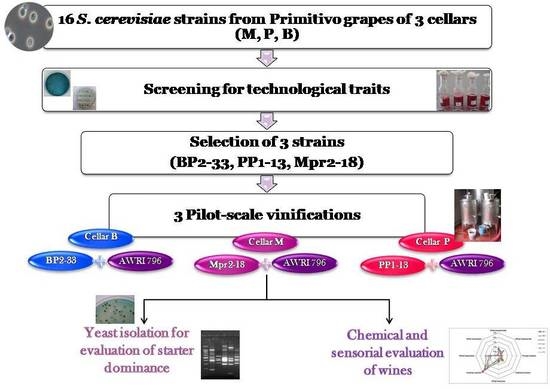