Climate Changes and Food Quality: The Potential of Microbial Activities as Mitigating Strategies in the Wine Sector
Previous Article in Special Issue

Anhydrobiosis in Yeasts: Changes in Mitochondrial Membranes Improve the Resistance of Saccharomyces cerevisiae Cells to Dehydration–Rehydration

The Biodiversity of Saccharomyces cerevisiae in Spontaneous Wine Fermentation: The Occurrence and Persistence of Winery-Strains

Saccharomyces cerevisiae populations occurring in spontaneous wine fermentations display a high polymorphism, although few strains are generally able to dominate the fermentative process. Recent studies have suggested that these indigenous S. cerevisiae strains are representative of a specific oenological ecosystem, being associated to a given wine-producing area or a single winery. In contrast, according to other ecological studies, no correlation between genotypic and phenotypic groups of the native S. cerevisiae strains and their origin was found. In this work, several S. cerevisiae strains were isolated in consecutive years from spontaneous fermentations carried out in the same wineries located in different oenological areas in Tuscany, and their persistence was assessed by molecular methods. Some predominant S. cerevisiae strains persisted in different fermentations in the same winery from one year to another and they seemed to be representative of a single winery rather than of an oenological area. Therefore, data suggested the idea of the “winery effect” or a microbial terroir at a smaller scale. The use of these typical strains as starter yeasts could provide wines with the distinctive characteristics of a particular winery or sub-zone. View Full-Text
Keywords: biodiversity; Saccharomyces cerevisiae; spontaneous wine fermentation; winery-effect biodiversity; Saccharomyces cerevisiae; spontaneous wine fermentation; winery-effect
►▼ Show Figures 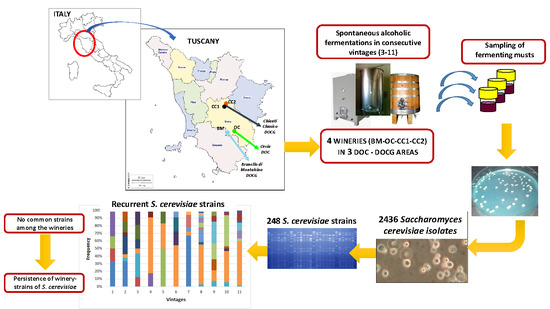