With the advent of submesoscale permitting basin-scale ocean simulations, the seasonality of mesoscale eddies with kinetic energies peaking in summer has been commonly attributed to submesoscale eddies feeding back onto the mesoscale via an inverse energy cascade under the constraint of stratification and Earth’s rotation. In contrast, by running a 101-member, seasonally forced, three-layer quasi-geostrophic (QG) ensemble configured to represent an idealized double-gyre system of the subtropical and subpolar basin, we find that the mesoscale kinetic energy shows a seasonality consistent with the summer peak without resolving the submesoscales; by definition, a QG model only resolves small Rossby and Froude number dynamics () while submesoscale dynamics are associated with . Here, by quantifying the Lorenz cycle of the mean and eddy energy, defined as the ensemble mean and fluctuations about the mean, respectively, we propose a different mechanism from the inverse energy cascade. During summer, when the Western Boundary Current is stabilized and strengthened due to increased stratification, stronger mesoscale eddies are shed from the separated jet. Conversely, the opposite occurs during the winter; the separated jet destablizes and results in overall lower mean and eddy kinetic energies despite the domain being more susceptible to baroclinic instability from weaker stratification. View Full-Text
Keywords: ocean circulation; Lorenz energy cycle; quasi-geostrophic flows; ensemble modelling ocean circulation; Lorenz energy cycle; quasi-geostrophic flows; ensemble modelling
►▼ Show Figures 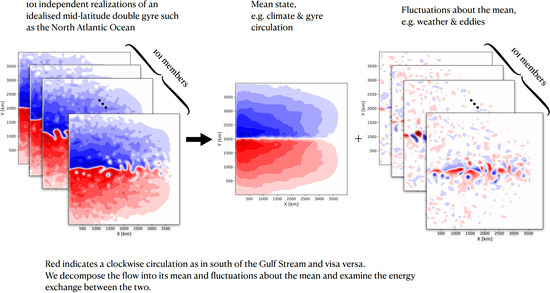