An analytical model of long Rossby waves is developed for a continuously-stratified, planetary geostrophic ocean in the presence of arbitrary bottom topography under the assumption that the potential vorticity is a linear function of buoyancy. The remaining dynamics are controlled by equations for material conservation of buoyancy along the sea surface and the sea floor. The mean, steady-state surface circulation follows characteristics that are intermediate to and contours, where is the Coriolis parameter and is the ocean depth; for realistic stratification and weak bottom currents, these characteristics are mostly zonal with weak deflections over the major topographic features. Equations are derived for linear long Rossby waves about this mean state. These are qualitatively similar to the long Rossby wave equations for a two-layer ocean, linearised about a state of rest, except that the surface characteristics in the wave equation, which dominate the propagation, follow precisely the same path as the mean surface flow. In addition to this topographic steering, it is shown that a weighted integral of the Rossby propagation term vanishes over any area enclosed by an contour, which has been shown in the two-layer model to lead to Rossby waves “jumping” across the contour. Finally, a nonlinear Rossby wave equation is derived as a specialisation of the result previously obtained by Rick Salmon. This consists of intrinsic westward propagation at the classical long Rossby speed, modified to account for the finite ocean depth, and a Doppler shift by the depth-mean flow. The latter dominates within the Antarctic Circumpolar Current, consistent with observed eastward propagation of sea surface height anomalies. View Full-Text
Keywords: Rossby waves; ocean circulation; Southern Ocean; Antarctic Circumpolar Current; bottom topography; topographic steering; Doppler shift; planetary geostrophic equations Rossby waves; ocean circulation; Southern Ocean; Antarctic Circumpolar Current; bottom topography; topographic steering; Doppler shift; planetary geostrophic equations
►▼ Show Figures 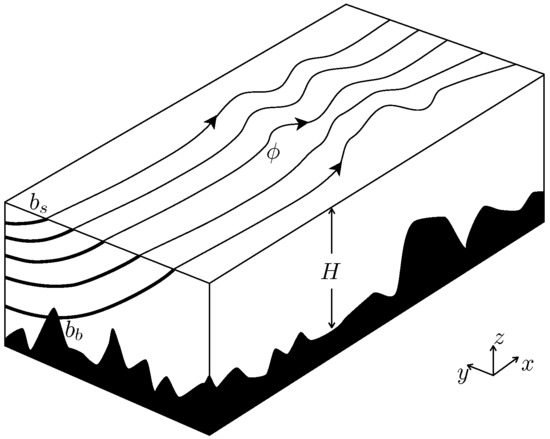