Factors Underlying Food Choice Motives in a Brazilian Sample: The Association with Socioeconomic Factors and Risk Perceptions about Chronic Diseases
Next Article in Special Issue

Fungi Burger from Stale Bread? A Case Study on Perceptions of a Novel Protein-Rich Food Product Made from an Edible Fungus
Previous Article in Special Issue

Scientific Approaches on Extraction, Purification and Stability for the Commercialization of Fucoxanthin Recovered from Brown Algae

The scientific community has corroborated the numerous beneficial activities of fucoxanthin, such as its antioxidant, anti-inflammatory, anticancer or neuroprotective effects, among others. These properties have attracted the attention of nutraceutical, cosmetic and pharmacological industries, giving rise to various possible applications. Fucoxanthin may be chemically produced, but the extraction from natural sources is considered more cost-effective, efficient and eco-friendly. Thus, identifying suitable sources of this compound and giving a general overview of efficient extraction, quantification, purification and stabilization studies is of great importance for the future production and commercialization of fucoxanthin. The scientific research showed that most of the studies are performed using conventional techniques, but non-conventional techniques begin to gain popularity in the recovery of this compound. High Performance Liquid Chromatography (HPLC), Nuclear Magnetic Resonance (NMR) and spectroscopy techniques have been employed in the quantification and identification of fucoxanthin. The further purification of extracts has been mainly accomplished using purification columns. Finally, the stability of fucoxanthin has been assessed as a free molecule, in an emulsion, or encapsulated to identify the variables that might affect its further industrial application. View Full-Text
Keywords: brown macroalgae; extraction; fucoxanthin; purification; quantification brown macroalgae; extraction; fucoxanthin; purification; quantification
►▼ Show Figures 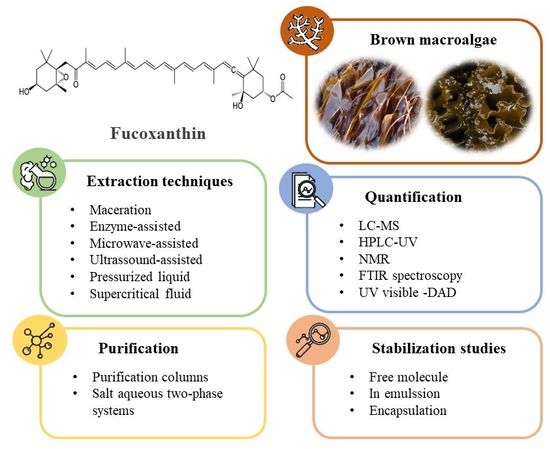