Chemical Compounds Responsible for Skin Allergy to Complex Mixtures: How to Identify Them?
Previous Article in Journal

The Beneficial Regulation of Extracellular Matrix and Heat Shock Proteins, and the Inhibition of Cellular Oxidative Stress Effects and Inflammatory Cytokines by 1α, 25 dihydroxyvitaminD3 in Non-Irradiated and Ultraviolet Radiated Dermal Fibroblasts
Previous Article in Special Issue

Sensitization to Fragrance mix-1 in Patients with Contact Dermatitis in Nord-East of Italy: 1996–2016 Time Trend and Gender Effect

The exudate of Commiphora myrrha (myrrh) has been known for centuries as one of the most popular natural skin remedies. The characterization and safety assessment of myrrh ingredients are challenging due to the chemical variability of commercially available sources, as well as potential adulteration. Human and animal data have reported potential concerns about myrrh as a skin sensitizer, although no specific chemical entity has been identified as a potential culprit yet. In the present work, the in chemico high-throughput method using dansylated cysteamine (HTS-DCYA) was applied to extract and fractions of myrrh samples in an attempt to identify potential skin sensitizers. Nine oxo-furanogermacranes and the sesquiterpenoid alismol were isolated as major constituents. Five of the compounds were identified as weakly to moderately reactive in HTS-DCYA and could therefore trigger the molecular initiating event leading to skin sensitization. The reactive compounds were identified as 6-oxofuranodienones (2 and 5) and methoxyfuranogermacrenones (7 and 9). The reaction adducts of 2 with DCYA was confirmed by HPLC-DAD-MS and by HPLC-MS/MS experiments. A comparison of the chemical profile of myrrh samples available in-house confirmed a certain degree of chemical variability, with compounds 1, 7, and 9 occurring in four of the six samples. View Full-Text
Keywords: skin sensitization; myrrh; in chemico methods; HTS-DCYA skin sensitization; myrrh; in chemico methods; HTS-DCYA
►▼ Show Figures 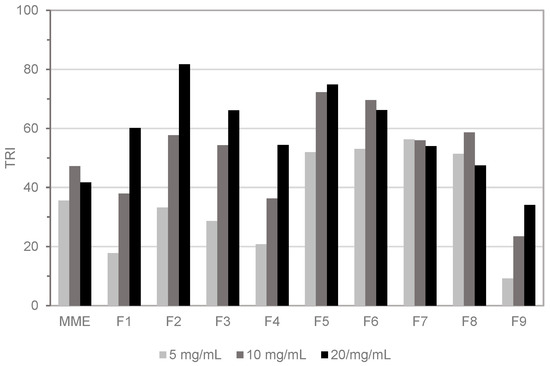