In this work, we present a potentiometric pH sensor on textile substrate for wearable applications. The sensitive (thick film graphite composite) and reference electrodes (Ag/AgCl) are printed on cellulose-polyester blend cloth. An excellent adhesion between printed electrodes allow the textile-based sensor to be washed with a reliable pH response. The developed textile-based pH sensor works on the basis of electrochemical reaction, as observed through the potentiometric, cyclic voltammetry (100 mV/s) and electrochemical impedance spectroscopic (10 mHz to 1 MHz) analysis. The electrochemical double layer formation and the ionic exchanges of the sensitive electrode-pH solution interaction are observed through the electrochemical impedance spectroscopic analysis. Potentiometric analysis reveals that the fabricated textile-based sensor exhibits a sensitivity (slope factor) of 4 mV/pH with a response time of 5 s in the pH range 6–9. The presented sensor shows stable response with a potential of 47 ± 2 mV for long time (2000 s) even after it was washed in tap water. These results indicate that the sensor can be used for wearable applications.
Keywords: pH sensor; e-textile; potentiometric; graphite; wearable system pH sensor; e-textile; potentiometric; graphite; wearable system

The schematic representation of the potentiometric pH sensor developed on cellulose-polyester blended cloth is shown in Figure 1a. The cloth substrate used here consists of cellulose-polyester blend with 55% cellulose and 45% polyester and it has excellent wet and dry bidirectional strength due to the polyester content. The sensor comprises of Ag/AgCl reference electrode (RE) and G-PU SE deposited (area of 1 cm2) via screen printing. Initially, two strips (2 cm length and 2 mm width) of Ag conducting layers (RS components), one for SE and the other for RE, were printed on the top of the cloth and dried at 80 °C for 1 h. The SE was prepared by mixing 1 g of activated graphite powder (molecular weight of 12.01 g/m with particle size of <20 µm, Sigma Aldrich, St. Louis, MO, USA) in equal weight percentage of PU (1:1 wt %, PU resin from Blackfriar Paints) by using agate and mortar. The resulting composite was printed on substrate connected to Ag interconnects for an external circuit as shown in Figure 1a. Post-deposition the SE electrode was cured at 80 °C for 1 h in an oven. Ag/AgCl ink (Gwent Group, Wales, UK) was used as RE and is printed on top of the second Ag electrode and cured at a similar condition to SE. The image of electrodes for the potentiometric pH sensor on cloth is shown in the inset of Figure 1b. Finally, electrical connections between the sensors and measurement set up were made. After the external contact electrodes were soldered, a Polydimethylsiloxane (PDMS) ink was drop-casted as an insulative film to prevent the degradation of the electrical contact (Ag), when they are dipped in liquid solutions. The mechanical flexibility of the sensors is evident from Figure 1b.
The structural properties of the SE were investigated by using a Hitachi SU8240 field emission SEM. The surface morphology and roughness of the film were determined using a stylus profilometer (DektakXT™, Bruker, Billerica, MA, USA). The XRD, P’Analytical X‘Pert, with Cu Kα (λ = 1.514 Å) was used to investigate the crystal structure. The electrochemical sensing performance of the sensor was evaluated by using Autolab electrochemical workstation (PGSTAT302N, Metrohm, Runcorn, UK). We used two type of solutions for testing: (1) commercial pH buffer solution ranging from 5 to 9 (Sigma Aldrich), and (2) 0.1 M HCl and 0.1 M KOH solutions were prepared separately and were added dropwise into the distilled water for controlling the pH value of the solution. A commercial digital pH sensor (HI 98130 from Hanna® Instruments, Leighton Buzzard, UK) was used to measure the pH value of this test solution. The sensing performance and the electrochemical characterization of the pH sensor were analyzed with potentiometric methods, CV and EIS in a two-electrode system. In the potentiometric method, an open circuit potential (OCP) is generated between the SE and RE and is used for measuring the Nernstian response. The analytical performance of the SE was investigated by CV analyses against a commercial glass-based Ag/AgCl RE (Sigma Aldrich) and the thick film RE in the potential range of −1 to 1 V at scan rate of 100 mV/s. The double layer formation and the electron/ion exchange at the SE with solution were studied by EIS analysis in a frequency range of 10 mHz to 1 MHz with an amplitude of 10 mV. Furthermore, as the sensor is proposed for a textile-based wearable health-monitoring application, the effect of washing is also studied. The cloth-based sensor was washed with tap water. After measuring the data with the sensor in solution with pH value 7, we dipped the sensor again in tap water and dried it at room temperature. The interference of glucose and urea were measured by mixing 2 mM concentrated glucose in phosphate-based buffer (pH 7.4 is PBS (phosphate buffered saline, PBS) is a balanced salt solution (1X) used for a variety of cell culture, ThermoFisher Scientific, Waltham, MA, USA) and similarly for urea 0.5 mM concentration of solution. Finally, the test solutions were prepared by mixing pH 7.4 with glucose and urea solution for testing the interference. The flexibility performance of the SE was investigated under cyclic bending condition at 11.40 mm bending radius up to 500 times.

The surface morphology of graphite and Ag conductive electrodes on the cloth substrate is illustrated in the SEM image of Figure 2a. The film shows a rough surface morphology with porous structure, which is very likely because the cloth is used here as the substrate. The surface of SE reveals that the film exhibits a layered like micro-flakes structure consisting of graphite, as shown in Figure 2b. The SEM images show a good interface between the graphite and PU which improves the mechanical strength of the film. The cross-sectional SEM image of the graphite and Ag thick film electrodes on a cloth substrate is shown in Figure 2c. The binder PU enables a perfect adhesion of film on the substrates and strong interaction between graphite flakes. The thickness of the Ag conductive electrodes is observed to be ~10 µm and for SE is ~100 µm from cross-section of SEM image. The surface morphology of the graphite electrode after cyclic bending (50 cycles and 100 cycles) were measured by using SEM and is shown in the supplementary information (Figure S1). The analysis shows that after cyclic bending, no significant change was observed in the structural morphology of the material.
The XRD pattern of the SE shows a strong (002) diffraction line of graphite at 2θ = 26.8° (in Figure 3a), which is in good agreement with those reported for graphite polyurethane composite [54]. The high intensity of the peak represent enriched amount graphite layers in the sensitive film. The prominent presence of the graphite leads to very good conductivity of the electrode. The conductivity of the electrode will enable the excellent formation of edl while reacting with pH solution, as discussed in the following section. In addition to this, the surface roughness has a strong influence on the electrochemical performance of the device due to varying surface area available for electrochemical reactions. The scanning, carried out in the area of 5 × 5 mm2 with a resolution of 50 µm/scan, is shown in Figure 3b. The 3D surface morphology of 5 × 5 mm2 of SE is shown in Figure 3c. The surface roughness of the film was measured by using a 3D profilometer. The average surface roughness was determined to be about 40 µm by using a profilometer, Figure 3d. To evaluate the variation of surface morphology due to the substrate used for printing of the electrodes, we also printed the electrode on the top of poly vinyl chloride (PVC) and measured the 3D profile, which is shown in Figure S2 in supplementary. As compared to the rough surface of cloth, the smooth surfaced PVC leads to reduced surface roughness of the material. The film shows a roughness of the 17 µm on the top of the PVC.

The potentiometric thick-film pH sensor presented here is suitable for wearable applications, as evident from extensive analysis of the thick-film sensitive (graphite) and reference (Ag/AgCl) electrodes printed on cellulose-polyester blend cloth. Excellent adhesion and the surface morphology of the electrodes on the substrate are observed through the scanning electron microscopic image. 3D surface profilometry shows that the film has surface roughness of 40 µm and shows excellent crystalline property confirmed through XRD analysis. The fabricated sensor exhibits a sensitivity of 4 mV/pH in the range of pH 6–9. The response time of the sensor is 5 s and the results show negligible effect of interference and hysteresis. The sensor’s performance after washing in tap water is almost stable with a potential 47 ± 2 mV for a long time (2000 s). The cloth-based highly flexible pH sensor presented here has a fast response, but the sensitivity is low as compared to the ideal Nernstian response of other potentiometric pH sensors. Nonetheless, with the simple fabrication method presented here we are able to demonstrate that a pH sensor can be developed with methods that are compatible with textile processing. With further modification of the materials and integration method, we will improve the sensors’ performance in the future and also validate them for applications such as wearable health monitoring.

The following are available online at https://www.mdpi.com/2079-6374/9/1/14/s1, Table S1: Comparison of few textile based sensors performance. Figure S1: Surface morphology of the film (a) before bending (b) after 50 cycles of bending and (c) after 100 cycles of bending. Figure S2: (a) Surface profile scanning of the graphite-PU composite film over an area of 5 × 5 mm2 on the top of PVC substrate (b) 3D surface image of the sensitive electrode for roughness measurement. (c) Morphological scan on surface roughness. Figure S3: EIS analysis of sensor for different pH value of solution. Figure S4: Hysteresis of the potentiometric cloth based sensor for pH 9.8. Figure S5: Influence of scan rate on CV response of thick cloth-based sensor at pH- 7.4 buffer solution.

L.M. and R.D. planned this work; L.M. fabricated the sensor, performed analysis and analyzed the data. W.D. analyzed the structural properties and contributed to characterizing the cyclic bending of the device. N.Y. carried out the SEM analysis. L.M. and R.D. wrote the manuscript and R.D. provided the overall supervision.

This work was supported in part by the Frontiers of Engineering for Development Seed Funding (FoESFT5/100025/304218-01) by The Royal Academy of Engineering, and EPSRC Engineering Fellowship for Growth—PRINTSKIN (EP/M002527/1, neuPRINTSKIN (EP/R029644/1). The authors are thankful to James Watt Nanofabrication Centre (JWNC) at University of Glasgow for support related to structural characterization of the material. 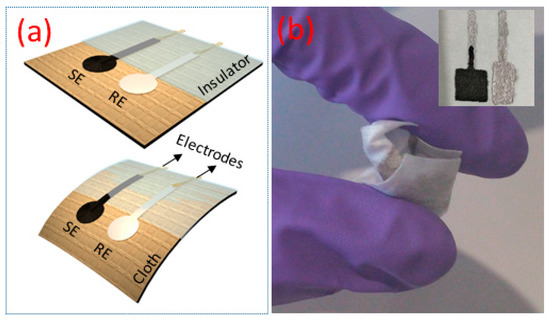 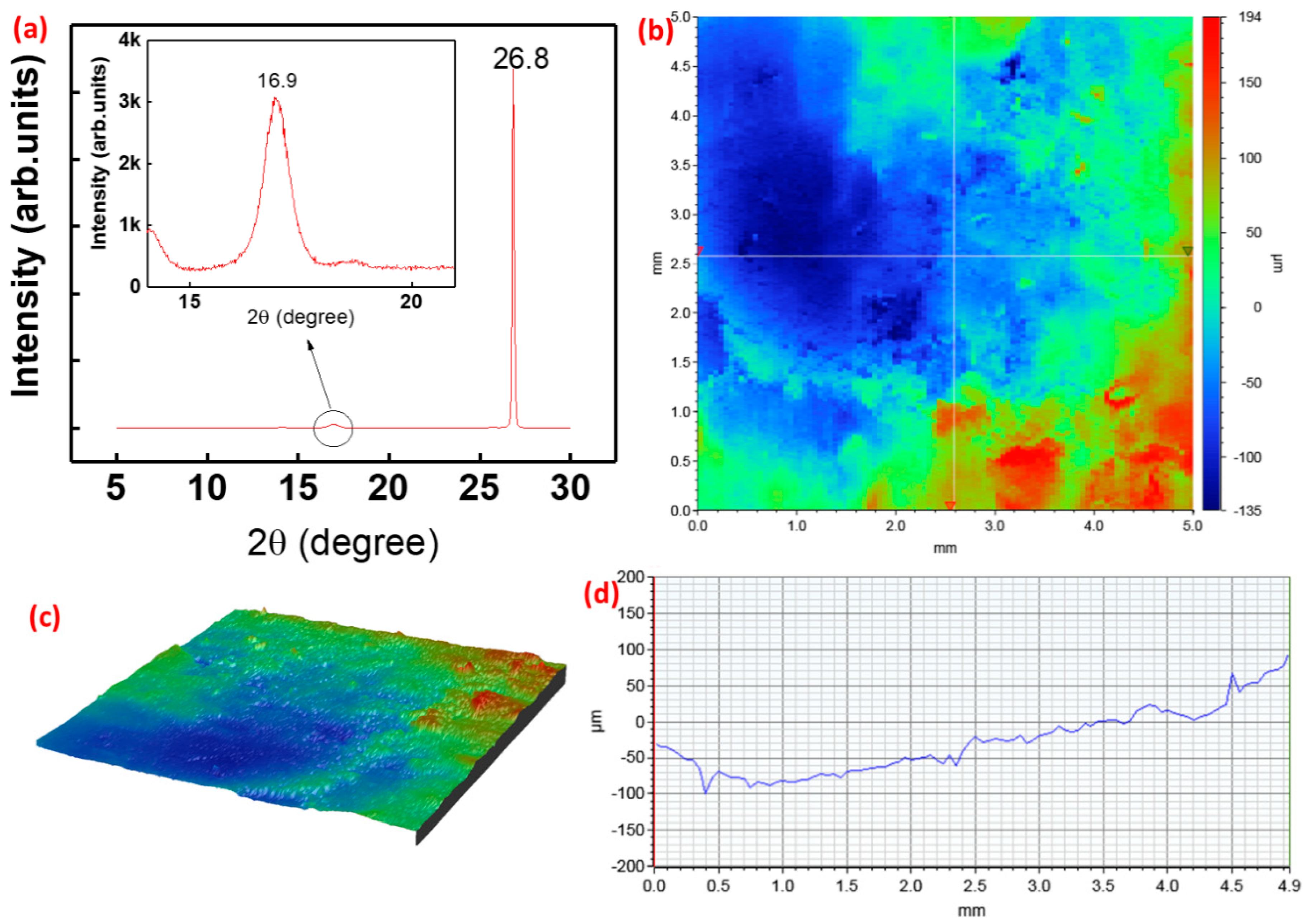