IP Things as Boundary Objects: The Case of the Copyright Work
Next Article in Special Issue

Back to the Future: The Digital Millennium Copyright Act and the Trans-Pacific Partnership

Case Selection in the Russian Constitutional Court: The Role of Legal Assistants

Constitutional courts throughout the world are highly selective in forming their agenda. Scholars who have studied the setting of agenda have not reached agreement on the role of legal clerks in this process. This article focuses on the role of the Secretariat of the Russian Constitutional Court in the case selection process. The Russian Constitutional Court receives about twenty thousand petitions annually. Nevertheless, only dozens of them are decided on their merits by judges. Through the description of the case movement process we show that the Secretariat does have at least moderate influence on case selection. Using data received from observation and interviews with the Court’s staff and judges, we find that legal assistants’ decision on whether to promote a case to judges is based on different logics of decision making. First, they are bound by legal requirements. However, bureaucratic logic and the logic of appropriateness can also influence the amount of incentives to promote cases to judges. View Full-Text
Keywords: constitutional courts; case selection; law clerks constitutional courts; case selection; law clerks
►▼ Show Figures 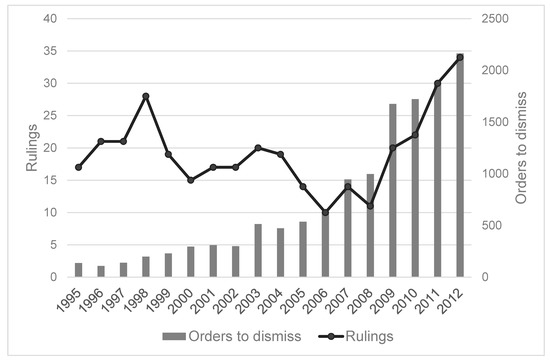 Dzmitryieva, A. Case Selection in the Russian Constitutional Court: The Role of Legal Assistants. Laws 2017, 6, 12.


Dzmitryieva A. Case Selection in the Russian Constitutional Court: The Role of Legal Assistants. Laws. 2017; 6(3):12.