This study investigated the effect of a 12-week modified German Volume Training intervention, or the 10 sets method, on muscle strength and hypertrophy. Twelve healthy males were randomly assigned to either a 5-SET or 10-SET group and performed 5 or 10 sets, respectively, of 10 repetitions at 60–80% one-repetition maximum (1RM). Muscle strength and body composition measures were taken at baseline, six weeks, and after 12 weeks of training. No significant changes in total, trunk, and arm lean mass were found within and between groups at any time point. There was no significant difference between groups for lean leg mass. However, a decrease in lean leg mass was observed within the 10-SET group between six and 12 weeks (p = 0.02). An increase in 1RM bench press was found within the 5-SET group at week 6 (p = 0.001) and 12 (p = 0.001) when compared to baseline, while no increases in 1RM leg press were observed at any time point within any group. No significant differences were found for 1RM bench press and leg press between groups. For 1RM bench press moderate effect sizes (ES) favored 5-SET and for 1RM leg press small ESs favored 10-SET. Findings suggest performing >5 sets per exercise does not promote greater gains in muscle strength and hypertrophy. Future research should aim to substantiate these preliminary findings in a larger cohort.
Keywords: resistance training; muscle hypertrophy; muscle strength; training volume resistance training; muscle hypertrophy; muscle strength; training volume

Twelve healthy males were randomly assigned to either a 5-SET group (n = 6; age = 23.7 ± 3.0 years; body mass = 76.0 ± 16.4 kg; height = 180.7 ± 6.0 cm) or 10-SET group (n = 6; age = 23.6 ± 2.9 years; body mass = 83.3 ± 7.1 kg; height = 176.4 ± 13.0 cm). Participants had a minimum of one year of resistance training experience at the recreational level and had been performing at least three resistance training sessions per week consistently over the previous three months. All participants reported not having used anabolic steroids or any other legal or illegal agents known to increase muscle size during the previous year. Written informed consent was obtained from all participants before commencing the study. Participants were asked to refrain from any resistance training away from the supervised sessions. The study was approved by the University of Sydney Human Research Ethics Committee.

This study was carried out over a period of 12 weeks to determine the effects of performing five sets versus 10 sets of compound resistance exercises on muscular hypertrophy and strength. Outcomes were measured at baseline, six weeks, and 12 weeks. Training was performed three times per week, with all sessions supervised by fourth-year university-trained students from the Discipline of Exercise and Sport Science. Whey protein was consumed within 30 min post-exercise to aid in potentiation of muscle protein synthesis following training sessions.

The training program consisted of a “split-routine” that involved performing different exercises targeting specific muscle groups during the three training sessions per week. The chest and upper back were trained in session 1, the legs in session 2, while the shoulders and arms were trained in session 3. During each training session, the 5-SET and 10-SET groups performed the same exercises (Table 1). The only difference between the intervention groups was the number of sets performed for the first two compound exercises during each training session (e.g., five versus 10 sets for the bench press). Exercises (with the exception of abdominal exercises and calf raisers) were performed for 10 repetitions at loads of 60–80% 1RM with 60–90 s recovery between sets. If 10 repetitions could not be performed during an exercise with a given load the participants were instructed to perform as many repetitions possible. Therefore, the loads lifted for exercises during sessions were not reduced if participants could not complete 10 repetitions. On the last set for all exercises participants were instructed to perform repetitions to the point of momentary failure (i.e., no longer able to produce adequate force to lift the load and complete the repetition). During all sets, repetitions were performed in a controlled manner (~1 s concentric contraction and ~2 s eccentric contraction). When participants were able to complete >10 repetitions on the final set and 10 repetitions for the previous sets of an exercise (with correct technique), the training load was increased by approximately 5–10%. The increase in training loads were influenced by the exercise, with generally greater increases in load for exercises involving larger compared to smaller muscle groups.

The one-repetition maximum (1RM) test was used to assess maximal strength for the flat barbell bench press and horizontal leg press. Participants refrained from any exercise other than activities of daily living for at least 48 h prior to 1RM testing. Prior to assessing the 1RM, a specific warm-up was performed involving a set of five repetitions at ~50% of perceived 1RM followed by 1–2 sets of 2–3 repetitions at a load corresponding to ~60–80% 1RM. The 1RM protocol involved performing trials of a single repetition of increasing load (~5–10% increments) with 3–5 min rest between attempts. This cycle was continued until the participant was unable to complete a lift, with the 1RM being the heaviest load that was successfully lifted. A successful bench press attempt was achieved if the barbell was lowered close to the chest, followed by lifting the bar until the elbows were almost straight. Additionally, for a successful 1RM bench press, participants needed to display minimal back arching and swaying. For the leg press, participants commenced with their knees flexed to approximately 90°. A successful 1RM leg press attempt was achieved through extension of the hips and knees until almost straight and then returning to the starting position. The test-retest intraclass correlation coefficient from our laboratory for 1RM bench press and leg press were ≥0.90.

Throughout the study, participants were encouraged to increase their caloric intake. To acquire the extra amount of calories, participants were advised to eat slightly larger portions during each meal of their usual diet and avoid taking any supplements other than that provided in the course of the study. To maximize the potential for muscle strength and lean mass gains as a result of training, participants consumed a protein supplement within 30 min post-exercise, as is usually practiced by experienced resistance trainers. The supplied supplement (Venom whey protein concentrate; The Ausray Group, Queensland, Australia) contained 30.8 g protein, 0.2 g fat, and 0.9 g carbohydrate.

All analyses were performed using SPSS version 22.0 for Windows (IBM Corp., Armonk, NY, USA). An independent t-test was used to compare baseline characteristics (body composition and muscular strength) and the training variables (% 1RM and volume load) of 5-SET and 10-SET groups over the 12 weeks. A 2 × 3 (group × time) analysis of variance was used to examine differences between training protocols (5-SET versus 10-SET) on body mass, body mass index (BMI), body fat (%), lean mass (total body, trunk, arm, and leg), and strength (1RM bench press and leg press). Tukey post hoc tests were used when significant analysis of variance results were found. Data are presented as means ± standard deviation (SD). The level of significance was set at p < 0.05 and trends were declared at p = 0.05 to <0.10. Furthermore, 95% confidence intervals (CI) were calculated in addition to effect size (ES) using Cohen’s d [22] for each outcome to determine the magnitude of differences found within and between each training condition. The ES were calculated from the difference between mean post-test scores and dividing by pooled SD.
An ES of 0.20 or less was considered a trivial effect, 0.21 to 0.59 a small effect, 0.60 to 1.19 a moderate effect, 1.20 to 1.99 a large effect, 2.0 to 3.9 a very large effect, and >4.0 a nearly perfect effect [23]. Due to the relatively small number of participants recruited for the present study (n = 12), when there were ESs > 0.20 between groups that were not statistically significant (p > 0.05), the total sample size required to reach statistical significance (power of 95%) was determined using G*power 3.1.5 [24].

D.A.H. performed the data processing and statistical analysis and drafted the manuscript; T.A. supervised training sessions and conducted muscle performance assessments; M.H. assisted with data processing and statistical analysis; L.M. assisted with supervising training sessions and conducting anthropometry assessments; G.C.W. conducted the body composition assessments; Y.M. conducted the body composition assessments. All authors have read and approved the final version of the manuscript and agree with the order of presentation of the authors.

No conflicts of interest are declared by the authors. 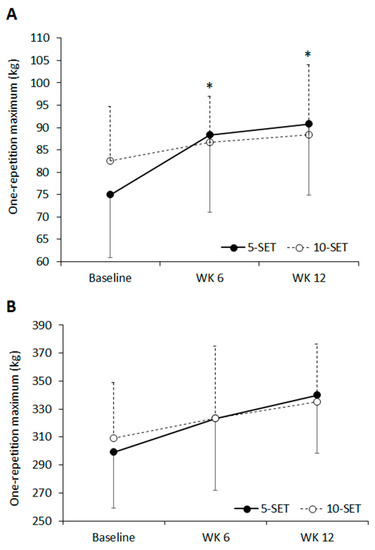