Transforming Growth Factor β (TGF-β) is involved in fibrosis as well as the regulation of muscle mass, and contributes to the progressive pathology of muscle wasting disorders. However, little is known regarding the time-dependent signalling of TGF-β in myoblasts and myotubes, as well as how TGF-β affects collagen type I expression and the phenotypes of these cells. Here, we assessed effects of TGF-β on gene expression in C2C12 myoblasts and myotubes after 1, 3, 9, 24 and 48 h treatment. In myoblasts, various myogenic genes were repressed after 9, 24 and 48 h, while in myotubes only a reduction in Myh3 expression was observed. In both myoblasts and myotubes, TGF-β acutely induced the expression of a subset of genes involved in fibrosis, such as Ctgf and Fgf-2, which was subsequently followed by increased expression of Col1a1. Knockdown of Ctgf and Fgf-2 resulted in a lower Col1a1 expression level. Furthermore, the effects of TGF-β on myogenic and fibrotic gene expression were more pronounced than those of myostatin, and knockdown of TGF-β type I receptor Tgfbr1, but not receptor Acvr1b, resulted in a reduction in Ctgf and Col1a1 expression. These results indicate that, during muscle regeneration, TGF-β induces fibrosis via Tgfbr1 by stimulating the autocrine signalling of Ctgf and Fgf-2.
Keywords: Acvr1b; Tgfbr1; myostatin; Col1a1; skeletal muscle; fibrosis; myogenesis; atrophy Acvr1b; Tgfbr1; myostatin; Col1a1; skeletal muscle; fibrosis; myogenesis; atrophy
►▼ Show Figures 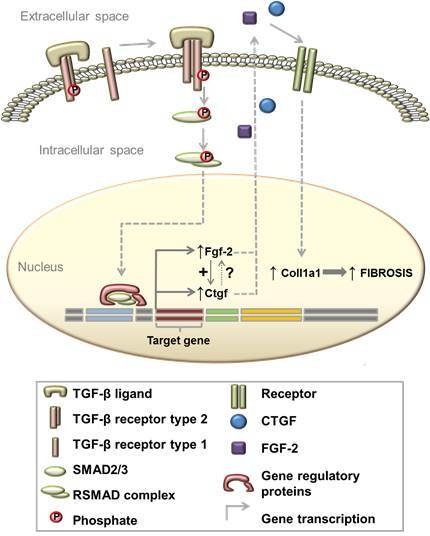