Developmental Study of Soot-Oxidation Catalysts for Fireplaces: The Effect of Binder and Preparation Techniques on Catalyst Texture and Activity

A series of layered birnessite (AMn4O8) catalysts containing different alkali cations (A = H+, Li+, Na+, K+, Rb+, or Cs+) was synthesized. The materials were thoroughly characterized using X-ray diffraction, X-ray fluorescence, X-ray photoelectron spectroscopy, Raman spectroscopy, specific surface area analysis, work function, thermogravimetry/differential scanning calorimetry, and transmission electron microscopy. The catalytic activity in soot combustion in different reaction modes was investigated (tight contact, loose contact, loose contact with NO addition). The activity in the oxidation of light hydrocarbons was evaluated by tests with methane and propane. The obtained results revealed that alkali-promoted manganese oxides are highly catalytically active in oxidative reactions. In soot combustion, the reaction temperature window was shifted by 195 °C, 205 °C, and 90 °C in tight, loose + NO, and loose contact conditions against uncatalyzed oxidation, respectively. The catalysts were similarly active in hydrocarbon combustion, achieving a 40% methane conversion at 600 °C and a total propane conversion at ~450 °C. It was illustrated that the difference in activity between tight and loose contacts can be successfully bridged in the presence of NO due to its facile transformation into NO2 over birnessite. The particular activity of birnessite with H+ cations paves the road for the further development of the active phase, aiming at alternative catalytic systems for efficient soot, light hydrocarbons, and volatile organic compounds removal in the conditions present in combustion engine exhaust gases.
Keywords: Soot; oxidation; volatile organic compound (VOC); birnessite; combustion; alkali; hydrocarbon; methane; propane; manganese Soot; oxidation; volatile organic compound (VOC); birnessite; combustion; alkali; hydrocarbon; methane; propane; manganese

Carbon-derived fuels play a major role in energy conversion applications, despite current efforts to replace them with more sustainable sources. They are used both in the energy and transportation sectors, where pyrolysis or the incomplete combustion of carbon-based fuels occurs regularly, leading to the emission of cancerogenic and mutagenic pollutants. Among these are soot, light hydrocarbons (methane, propane), volatile organic compounds (VOCs), and polyaromatic hydrocarbons (PAH), which are associated with the formation of smog and are harmful to human welfare [1,2,3,4]. Soot is the amalgamation of numerous substances containing carbon, from amorphous to ordered graphitic structures, polyenes, and graphene. The nanometric size of soot particles allows for their easy emission into the environment, where, as part of a ubiquitous smog, they can penetrate living organisms through the lungs or skin. Long-term exposure to soot particles can lead to many illnesses, including cancero and mutagenic changes or lung and heart problems [5,6,7]. Volatile organic compounds belong to a group of substances with a high vapour pressure at low temperatures. Thus, according to this definition, a wide range of substances belong to this group, ranging from simple alkanes to PAHs, many of which are detrimental for human health and to the environment [8,9,10]. Some of the most harmful non-halogenic VOCs include benzene, benzopyrene, toluene, formaldehyde, propylene, acetone, and styrene [9,11,12,13]. The materials’ reactivity towards VOCs oxidation can be gauged by testing catalysts in the combustion of light hydrocarbons, as they are thermodynamically more stable and more difficult to activate.
A large source of the aforementioned pollutants constitutes combustion engines, where the complex process of fuel combustion follow several parallel reaction pathways with the formation of many harmful types of pollutants. Among the most promising ways to reduce the emissions of pollutants from combustion engines into the environment is the use of complex catalysts in catalytic converters, which reduce the temperature of soot, light hydrocarbons, VOCs, and PAHs oxidation, allowing for their abatement before their release. Most currently used oxidation catalysts are based on more and more expensive noble metals (Pt, Pd, Rh) deposited onto metal oxide carriers (ceria, alumina) [9,14]. The rising costs and decreasing availability of the noble metals present an incentive to search for competitive catalytic solutions. Several classes of materials have been tested as potential replacements, among which are oxides with different structures and compositions, including quite promising perovskites and spinels [8,15,16,17,18,19,20,21,22]. The catalytic activity of these systems can be further modified by adding new noble metals, transition metals, or alkali metals as surface or bulk promoters [23,24,25,26,27,28,29].
Manganese oxides nanostructured by alkali [30], such as the layered birnessite (AMn4O8), are reported as highly promising candidates for substituting the noble metal-based systems, as they use cheap substrates, are environmentally benign, and are very reactive in oxidation reactions [12,13,31]. The octahedral-layered birnessite (OL-1) comprises of the edge-sharing MnO6 octahedral units forming a two-dimensional (2D) layered structure (Figure 1). The layers are typically ~7 Å apart and host v exchangeable cations (e.g., Na+, K+) or molecules in the interlayer space [32,33]. Their high reactivity stems from a combination of several factors such as a beneficial porous structure, high oxygen mobility, and good redox properties due to the different oxidation states of lattice manganese ions [34].
This work aimed to explore the effects of different alkali cations (H+, Li+, Na+, K+, Rb+, or Cs+) located between the MnO6 octahedral layers of birnessite on the catalytic activity of such materials in soot and light hydrocarbon oxidation reactions. It is anticipated that such an investigation will aid in the rational designing of a cheap and efficient noble metal-free catalyst for low-temperature oxidation reactions. The investigated catalysts were synthesized following the same coprecipitation method, introducing the alkali cations to a manganese precursor and then allowing the formation of the layered birnessite structure, thus assuring no contamination with other alkali elements (as occurs when the alkali are introduced via ion exchange). The obtained materials were tested in soot, methane, and propane combustion. Since NO is often present in the exhaust gasses, we further investigated the materials for their ability to convert NO to NO2. The latter gas was evaluated as an effective way to transfer oxygen from the catalyst to soot particles. The effectiveness in NO conversion was sought after, as its presence in the gas feed lowers the temperature of soot combustion, enhancing the loose contact condition’s reactivity by lowering the reaction temperature window towards the tight contact condition.

The birnessite-type catalysts (AMn4O8) with alkali-metal cations intercalated into the interlayer space were prepared by the oxidation of Mn2+ in an alkaline solution [32]. In the standard procedure of synthesis, a mixture of 3% H2O2 and 0.6 M AOH (where A is Li, Na, K, Rb, or Cs) was poured into a 0.3 M Mn(NO3)2 solution and left under stirring for 10 min. The obtained dark precipitate was kept in the mother liquid in mild room conditions for 24 h. Afterwards, the precipitate was separated from the reaction solution by filtration, washed generously with deionized water, and subsequently air-dried at 80 °C. Thereafter, the obtained products were heated at 4 °C/min and calcined in 450 °C for 2 h. The material reported as H-birnessite was obtained by ion exchange. In this case, 3 g of synthetic Na-birnessite was stirred in an acidic solution (pH = 1) for 21 h [31]. The product was then filtered, dried, and annealed as above. Reagents: H2O2 30%; Mn(NO3)2∙4H2O, pure p.a.; KOH ≥ 85%, pellets; NaOH, microgranular, ≥98.8%; HCl 35–38%, pure p.a. (POCH S.A., Gliwice, Poland), LiOH∙H2O, ≥99.995%; RbOH∙H2O, ≥85%; CsOH∙H2O, ≥90%(Merck KGaA, Darmstadt, Germany).

This paper presents comprehensive studies concerning the effect of different intra-layer alkali cations in birnessite on the catalytic oxidation of light hydrocarbons and soot. The introduction of the alkali cations strongly modifies the specific surface area and also the electron-donor properties of the catalysts, gauged by work function. The correlation between the catalytic activity and the work function was found to be reversed from what was previously reported, suggesting that the mechanism of oxidation over birnessite is not ruled by electron transfer. This conclusion is supported by the absence of correlation between the observed catalytic reactivity of the samples and the average oxidation state of the Mn. The modifying effect of the introduced alkali cations has a strong implication on the soot and light hydrocarbon oxidation reactions. While all the prepared materials are catalytically active, the most active catalyst by far is the H-bir sample, while the Rb- and Cs-birnessite samples are typically the least active (opposing the literature, where the alkali cations of higher atomic mass are reported to be more active). Taking non-catalytic soot combustion as a reference, the temperature of 50% soot conversion, T50%, was shifted down by 195, 205, and 90 °C in tight contact, loose contact + NO and loose contact conditions, respectively. The temperature reaction window was lowered to temperatures relevant for soot combustion in a combustion engine exhaust. For light hydrocarbon combustion, the most active catalyst was H-bir, achieving a 40% CH4 conversion at 600 °C and a total C3H8 conversion at ~450 °C. The highest observed reactivity for H-bir among the studied samples was correlated with the easy oxygen removal from this sample, both in terms of low desorption temperature and the highest quantity of released O2. The obtained results form the basis for the further development of alternative catalytic systems, where noble metals can be substituted by transition metal oxides such as birnessite. 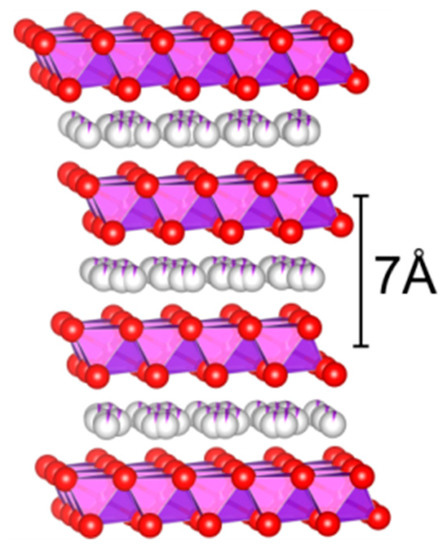 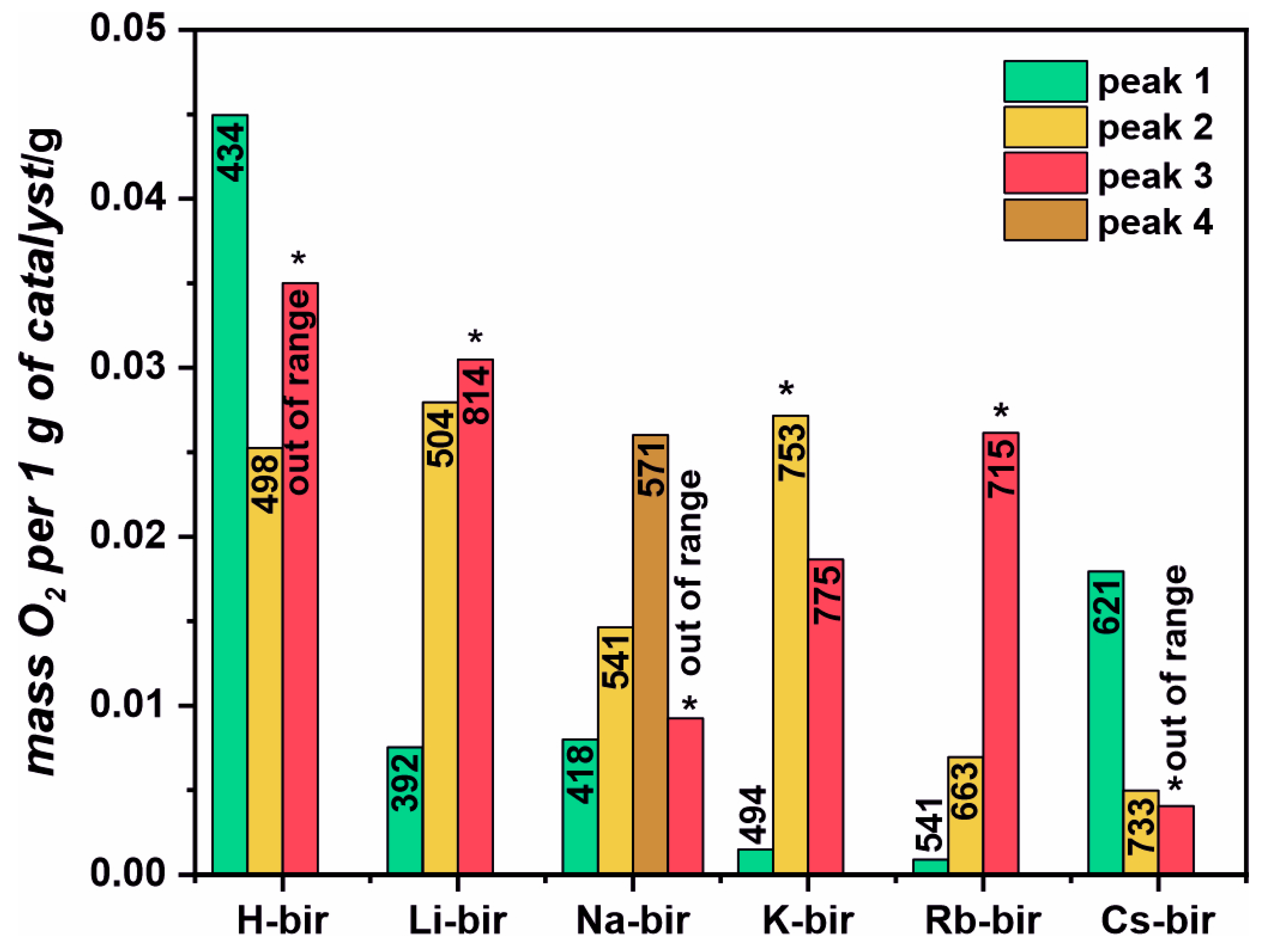 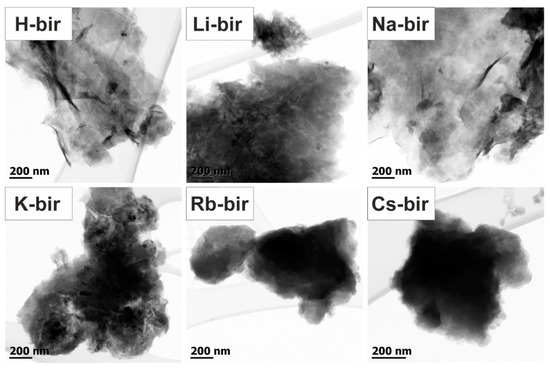 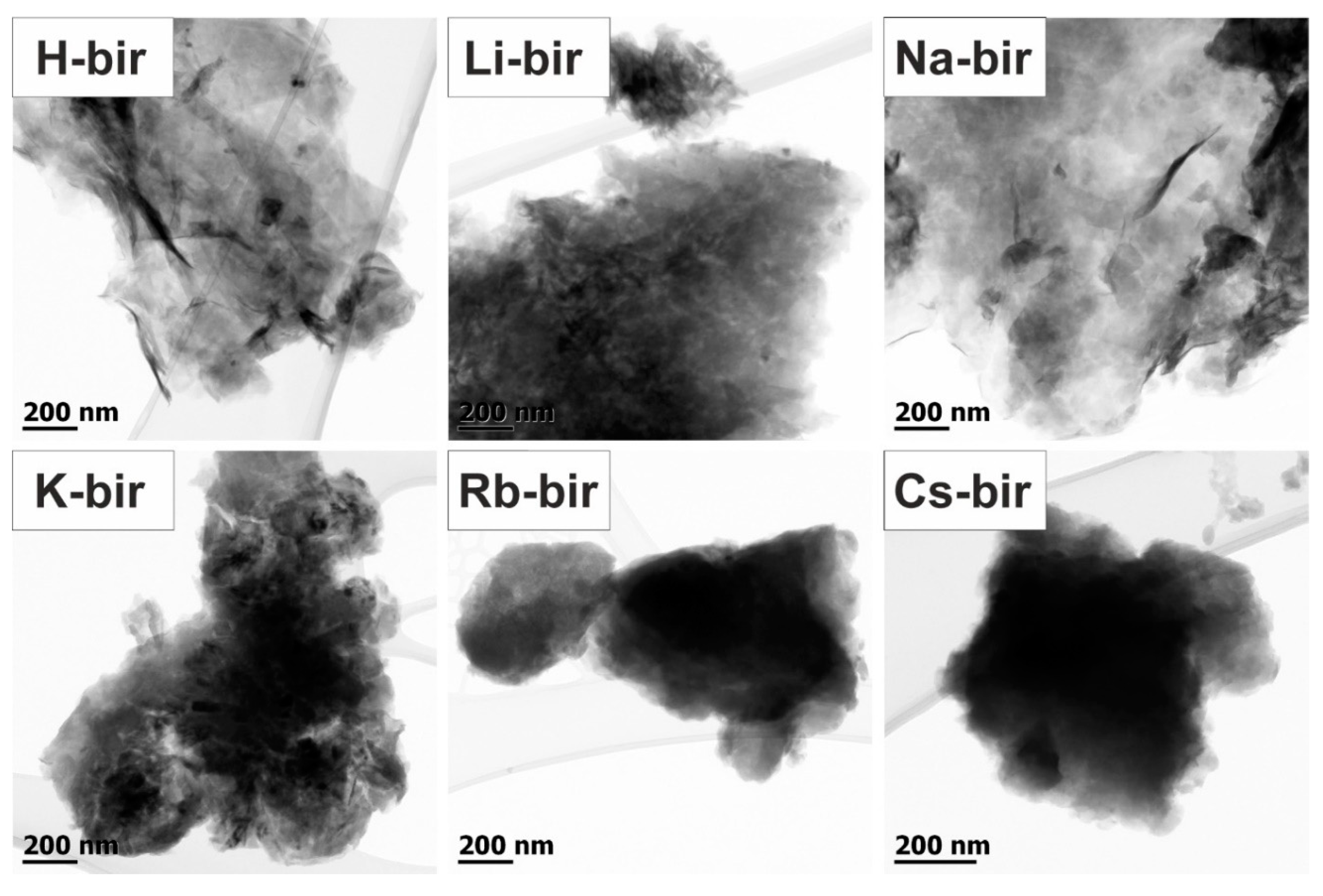 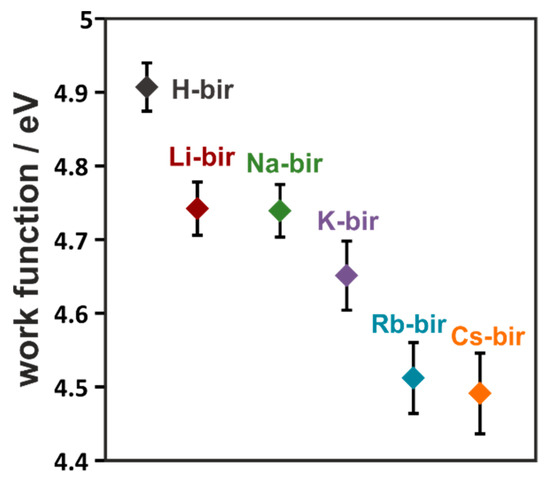 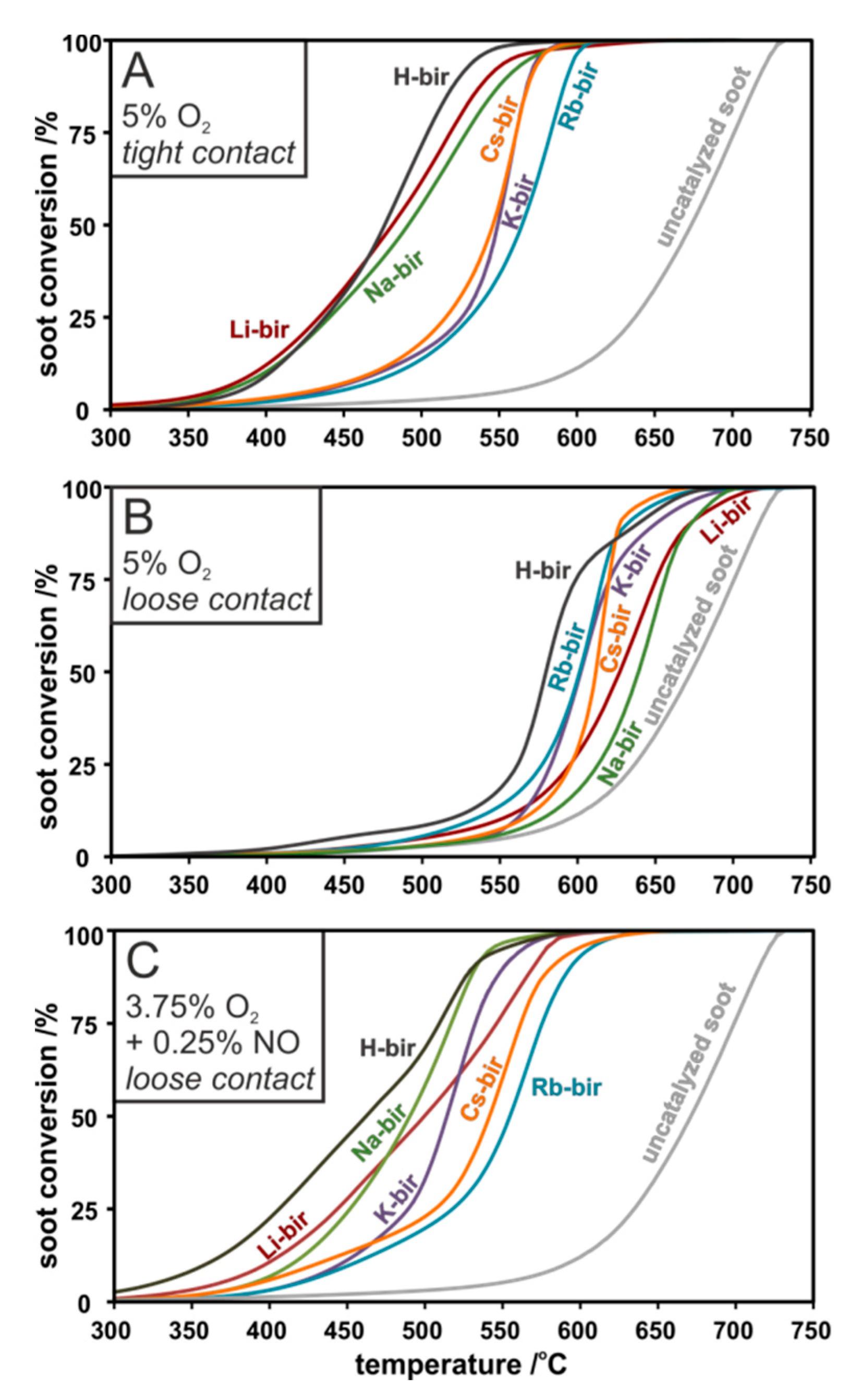 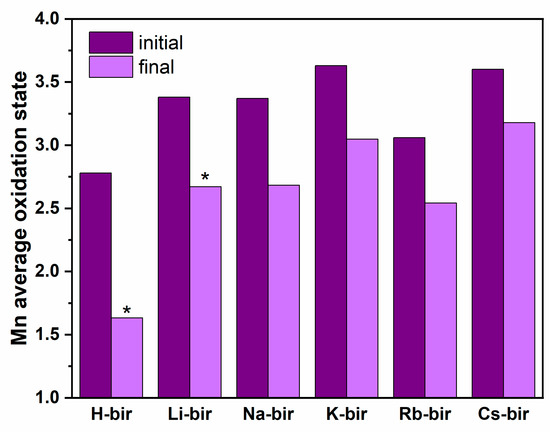