Epigenetic Regulation by lncRNAs: An Overview Focused on UCA1 in Colorectal Cancer
Next Article in Special Issue

The Role of the Anti-Aging Protein Klotho in IGF-1 Signaling and Reticular Calcium Leak: Impact on the Chemosensitivity of Dedifferentiated Liposarcomas

By inhibiting Insulin-Like Growth Factor-1-Receptor (IGF-1R) signaling, Klotho (KL) acts like an aging- and tumor-suppressor. We investigated whether KL impacts the aggressiveness of liposarcomas, in which IGF-1R signaling is frequently upregulated. Indeed, we observed that a higher KL expression in liposarcomas is associated with a better outcome for patients. Moreover, KL is downregulated in dedifferentiated liposarcomas (DDLPS) compared to well-differentiated tumors and adipose tissue. Because DDLPS are high-grade tumors associated with poor prognosis, we examined the potential of KL as a tool for overcoming therapy resistance. First, we confirmed the attenuation of IGF-1-induced calcium (Ca2+)-response and Extracellular signal-Regulated Kinase 1/2 (ERK1/2) phosphorylation in KL-overexpressing human DDLPS cells. KL overexpression also reduced cell proliferation, clonogenicity, and increased apoptosis induced by gemcitabine, thapsigargin, and ABT-737, all of which are counteracted by IGF-1R-dependent signaling and activate Ca2+-dependent endoplasmic reticulum (ER) stress. Then, we monitored cell death and cytosolic Ca2+-responses and demonstrated that KL increases the reticular Ca2+-leakage by maintaining TRPC6 at the ER and opening the translocon. Only the latter is necessary for sensitizing DDLPS cells to reticular stressors. This was associated with ERK1/2 inhibition and could be mimicked with IGF-1R or MEK inhibitors. These observations provide a new therapeutic strategy in the management of DDLPS. View Full-Text
Keywords: klotho; cancer; liposarcoma; calcium; ER stress; translocon; IGF-1; ERK; gemcitabine; TRPC6; channels klotho; cancer; liposarcoma; calcium; ER stress; translocon; IGF-1; ERK; gemcitabine; TRPC6; channels
►▼ Show Figures 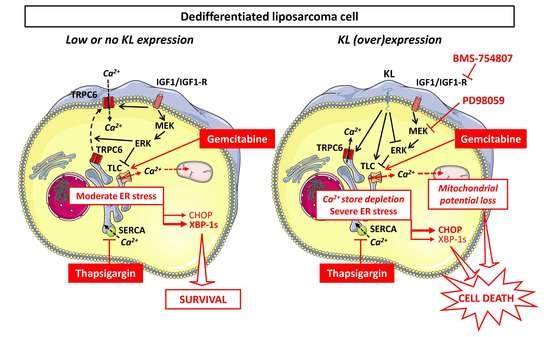