What Is the Impact of Energy Expenditure on Energy Intake?
Previous Article in Journal

Influence of Dietary Behaviors on Dyslipidemia in Pregnant Women and Its Effects on Physical Development of Fetuses and Infants: A Bidirectional Cohort Study
Previous Article in Special Issue

The Effect of Caloric Restriction with and without n-3 PUFA Supplementation on Bone Turnover Markers in Blood of Subjects with Abdominal Obesity: A Randomized Placebo-Controlled Trial

Many breast cancer survivors (BCS) gain fat mass and lose fat-free mass during treatment (chemotherapy, radiation, surgery) and estrogen suppression therapy, which increases the risk of developing comorbidities. Whether these body composition alterations are a result of changes in dietary intake, energy expenditure, or both is unclear. Thus, we reviewed studies that have measured components of energy balance in BCS who have completed treatment. Longitudinal studies suggest that BCS reduce self-reported energy intake and increase fruit and vegetable consumption. Although some evidence suggests that resting metabolic rate is higher in BCS than in age-matched controls, no study has measured total daily energy expenditure (TDEE) in this population. Whether physical activity levels are altered in BCS is unclear, but evidence suggests that light-intensity physical activity is lower in BCS compared to age-matched controls. We also discuss the mechanisms through which estrogen suppression may impact energy balance and develop a theoretical framework of dietary intake and TDEE interactions in BCS. Preclinical and human experimental studies indicate that estrogen suppression likely elicits increased energy intake and decreased TDEE, although this has not been systematically investigated in BCS specifically. Estrogen suppression may modulate energy balance via alterations in appetite, fat-free mass, resting metabolic rate, and physical activity. There are several potential areas for future mechanistic energetic research in BCS (e.g., characterizing predictors of intervention response, appetite, dynamic changes in energy balance, and differences in cancer sub-types) that would ultimately support the development of more targeted and personalized behavioral interventions. View Full-Text
Keywords: metabolism; obesity; nutrition; exercise; oncology metabolism; obesity; nutrition; exercise; oncology
►▼ Show Figures 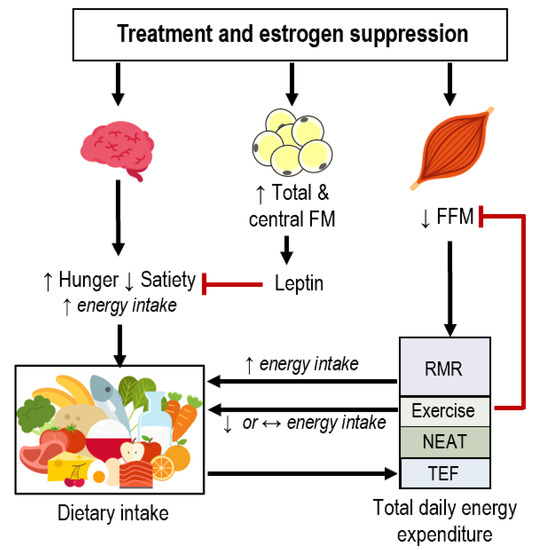