Fish oil supplements are one of the most commonly used non-vitamin/non-mineral natural products consumed in the United States and are used for several putative health benefits, including for their atheroprotective benefits on heart disease [1]. The main active ingredient in fish oils appears to be n-3 polyunsaturated fatty acids (PUFA), namely eicosapentaenoic acid (EPA; 20:5 n-3) and docosahexaenoic acid (DHA; 22:6 n-3). N-3 PUFA can modify a variety of cellular processes associated with lipid metabolism, inflammation, thrombosis, and atherosclerosis [2]. Results from various epidemiological and clinical studies have also demonstrated the important role of n-3 PUFA in decreasing triglycerides (TG) [3].
Although TG lowering is a consistent observation, the effect of dietary n-3 fish oil on other cardiovascular disease (CVD) risk variables are less consistent. In fact, several large clinical trials, as well as a recent meta-analysis involving more than 77,000 individuals, have failed to show a cardiovascular benefit for fish oil supplementation containing various amounts of EPA and DHA [4,5]. It is possible that the inconsistencies of fish oil studies derive from differences in their n-3 PUFA dose and study design, but also due to the differential effect of EPA and DHA on metabolic pathways related to cardiovascular disease. Regarding lipid metabolism, both complementary and divergent effects have been described for EPA and DHA. Generally, DHA, but not EPA, tends to increase plasma levels of low-density lipoprotein cholesterol (LDL-C) and high-density lipoprotein cholesterol (HDL-C) [6]. The mechanism for this difference between EPA and DHA is not fully understood, but it has been suggested to be related to their different effect on lipoprotein subfractions. The main lipoproteins, VLDL, LDL and HDL, exist in many different size subfractions, which vary in their relationship to cardiovascular risk [7,8]. Some human trials show that DHA increased LDL particle size and that EPA and DHA had different effects on HDL subfractions [9]. When purified EPA and DHA were directly compared, DHA shows a stronger effect in increasing larger HDL2 particle levels, whereas EPA decreases smaller HDL3 particle levels to a greater extent than DHA [9].
Most n-3 fish oil clinical trials have used a mixture of EPA and DHA with various ratios and have not carefully examined the potential differential impact of the two types of fatty acids (FAs) on lipids and lipoproteins [5,10]. Thus, it remains largely unknown whether fish oil supplements with different ratios of EPA to DHA may possibly differ in their cardiovascular benefit. Natural sources of fish oils can substantially vary in the relative amounts of EPA and DHA that they contain. For example, tuna oil contains more DHA than EPA, whereas anchovy and sardine oil contain more EPA than DHA [11,12]. Consequently, the molar ratio of EPA to DHA in over-the-counter fish oil supplements can vary from approximately 0.3 to 3 [13], depending on the source of fish used to extract the oil. In the current study, we used two different fish oil formulations, representing a wide range of EPA/DHA ratios (0.3 and 2.3), and compared their effect on lipid and lipoprotein levels, as well as other CVD risk factors, in healthy normolipidemic adults.

Capsules containing food-grade purified EPA-rich fish oil and DHA-rich fish oil were provided by Nippon Suisan Kaisha Ltd. (Tokyo, Japan). The FA profile of the two types of fish oil supplements shown in Table 1 were determined by gas chromatography (Japan Food Research Laboratories, Tokyo, Japan). The content of total saturated fatty acid (SAF), MUFA, and polyunsaturated fatty acid (PUFA) were comparable between the two fish oils, except that the long-chain omega-3 type is different: the ratio of EPA to DHA is 2.3 in EPA-rich fish oil, and 0.3 in DHA-rich fish oil. In addition, the taste and appearance were similar for the two types of fish oil supplements. Participants either received 12 g daily of EPA-rich oil (EPA: 3.5 g; DHA: 1.5 g) or DHA-rich oil (EPA: 1 g; DHA: 3.6 g), during each arm of the study.

Forty-one adult volunteers (aged 23 to 44) were recruited at the National Institutes of Health (NIH) Clinical Center (Bethesda, MD, USA). Entry criteria required that the patients be generally healthy with no chronic or serious disease. Subjects were excluded if they were taking any lipid-lowering drugs, fish oil supplements, or if their typical fish intake was more than three servings per week. The full list of inclusion and exclusion criteria is shown in Supplemental Table S1. The study was approved by the National Heart, Lung and Blood Institute institutional review board in keeping with the Declaration of Helsinki and all subjects gave written consent (ClinicalTrial.gov registration ID: NCT02514070; FDA Investigational New Drug (IND) No.: 126882). A power analysis indicated that 30 subjects would be required to detect a difference of 10% in TG levels between baseline and fish oil treatment, assuming a p-value of 0.05 and power of 80%.

The study was a randomized, cross-over, intervention study (2 × 8 weeks), with EPA-rich or DHA-rich fish oil supplement for 8-weeks, and an 8-week washout period between the two interventions (Figure 1). Subjects were instructed to take a total of 12 capsules daily (4 capsules per time, 3 times a day) during the intervention, which provided approximately 4.8 g of total EPA plus DHA. A 7-day food record and physical activity log were completed by each subject before each visit and were reviewed with nutrition staff at each visit. Subjects were counseled to maintain their lifestyle and dietary habits during the 24-week period of the study. Compliance was checked by 7-day food records, analyzed in Nutrition Data System for Research (University of Minnesota, Nutrition Coordinating Center, Minneapolis, MN, USA) and pill counting at the end of each intervention arm.

The heart rate (HR), blood pressure (BP), cardio-ankle vascular index (CAVI) and ankle-brachial index (ABI) were measured with the VaSera VS-1500N vascular screening system (Fukuda Denshi Co. Ltd., Tokyo, Japan) [16]. Briefly, the CAVI was estimated from the brachial and ankle pulse wave forms and electrocardiography, phonocardiography and BP measurements were simultaneously performed. ABI was measured based on the SBP for both the upper (brachial artery) and lower (tibial artery) and was calculated by dividing the ankle SBP by the brachial SBP.

Data are presented as the mean ± SD for parametric variables or the median ± IQR for non-parametric variables, and as absolute numbers (%) for categorical variables. Skewness and kurtosis measures were considered to assess normality and log transformations to make residuals closer to normal were employed, but because they did not affect the significance of any results, we only present untransformed data. To test the difference between fish oil supplements, students t-test for parametric variables and Mann–Whitney U test for non-parametric variables were performed. Comparisons with baseline were performed by paired t-test or Wilcoxon signed-rank test. Comparisons between EPA-rich and DHA-rich fish oils with adjustment for the period and arm effects of the baseline phase and other covariates (age, sex and racial groups) were achieved by applying a linear mixed effect model to the differences from each baseline for each biological parameter. Analysis was performed using Stata/IC 12.0 (StataCorp LP, College Station, TX, USA) and SAS 9.4 (SAS Institute Inc., Cary, NC, USA). p < 0.05 was considered statistically significant.

Baseline characteristics of the participants are shown in Table 2. The mean age was 33.9, and approximately half were male and there was a relatively wide racial distribution. Overall, the participants had a normal lipid and lipoprotein profile, with a relatively low mean TG of 89 mg/dL. Thirty out of 41 enrolled subjects completed the study. One subject withdrew because of mild alopecia (grade I) that was not attributed to the supplements. Ten subjects voluntarily withdrew because of personal time constraints related to scheduled follow-up visits as required by the protocol. There were two adverse events, including one unrelated medical condition (n = 1, during screening visit) and mild GI discomfort (grade I; n = 1, during the washout period), but both subjects completed the study. The 7-day food records showed that fish oil supplementations did not influence the mean intake of daily energy or individual nutrients, including fat, carbohydrate, protein, alcohol, cholesterol, total fiber, or individual FA content of the diet, during the study, without significant differences between the two fish oil supplements (Table 3). In addition, there were no apparent differences in terms of the tolerability of the two different fish oil supplements.

4.2. Characterization of Lipid/lipoprotein-Related Parameters on Supplements

4.5. Other Risk Factors and CVD Biomarkers

Neither fish oil supplementation had a major effect on non-lipid biomarkers related to CVD (Table 7), such as hsCRP. There were also no significant changes in parameters related to glucose metabolism (fasting glucose, insulin, or HOMA-IR score). Although EPA-rich oil supplementation showed a statistically significant decrease in hemoglobin A1c (HbA1C) compared to baseline (0.14%; p < 0.05), the change was relatively small, within the normal range and not clinically significant. Other observed changes in clinical laboratory tests were relatively small and viewed to be clinically insignificant. In terms of vascular function parameters, there were no significant changes in ankle-brachial index (ABI), cardio-ankle vascular index (CAVI), blood pressure (BP), and heart rate before and after either fish oil intervention.

A strength of this study is its double-blind, randomized, crossover design, which maximized our ability to detect differences between the two fish oil supplements. The two fish oil supplements also had a similar taste and appearance and were well matched in their FA profile except for having different EPA/DHA ratios. In addition, no major changes were found in lifestyle and dietary factors of the participant during the course of the study. Our study does have the following limitations: the sample size was relatively small, the supplement duration was short, participants were relatively healthy although they are generally overweight, it was a single dose design, and we did not collect red blood cells to measure membrane incorporation of DHA and EPA before and after treatment. In addition, we compared a large number of variables simultaneously therefore the multiple testing problem is likely to result in some significant results simply due to chance alone. Another limitation is that more research is needed to understand the clinical relevance in regard to atherogenesis for the differences we did observe in the effect of the two supplements on the NMR lipoprotein profile and the apoM content of HDL. Furthermore, no effects on inflammation and glucose homeostasis were observed with either fish oil supplement, but further studies are still warranted to examine EPA/DHA supplementation for specific subgroups of subjects with inflammation and insulin resistance.

Supplementation of fish oil with approximately the highest and lowest EPA/DHA ratios that are commonly found in over-the-counter supplements showed nearly identical beneficial effects on plasma lipids and lipoprotein subclass profile in normolipidemic adults, particularly in regard to lowering plasma TG and TRL particles. Future studies are warranted to evaluate the generalizability of our findings in larger and more heterogeneous patient populations, such as those with dyslipidemias.

The authors are thankful to all staff of Outpatient 7 clinics at the NIH Clinical Center (Warren Grant Magnuson Clinical Center) in particular to Farahnaz Hassanshahi, Sr. CRN, OCN/BMTCRN, Team Lead; Roumiana Nenkova-Dimtcheva, Sr. CRN, OCN, Clinical Educator; Elizabeth Wendell, RN, MS, OCN, Nurse Manager, for their help in this study. We thank Metabolic Clinical Health Technicians for all the work to collect the dietary data. We are also thankful to Dana Smith, Protocol Navigator, Adriana Byrnes, Ph.D., Head of Regulatory Support. We thank Dr. Lita Freeman for proofreading the manuscript. The authors would like to thank Nippon Suisan Kaisha Ltd. for supplying fish oil supplement capsules, and thank Hiroko Miyahara and Masashi Katayama for their technical assistance. This work was supported by the Intramural Research Program of the National Heart, Lung and Blood Institute (NHLBI) (HL006095) at the National Institutes of Health. 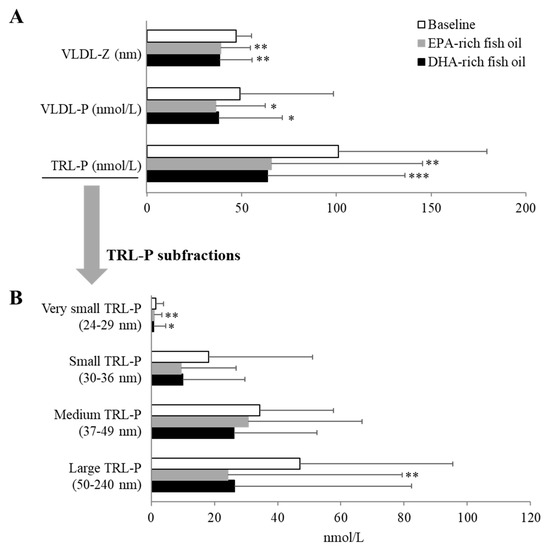 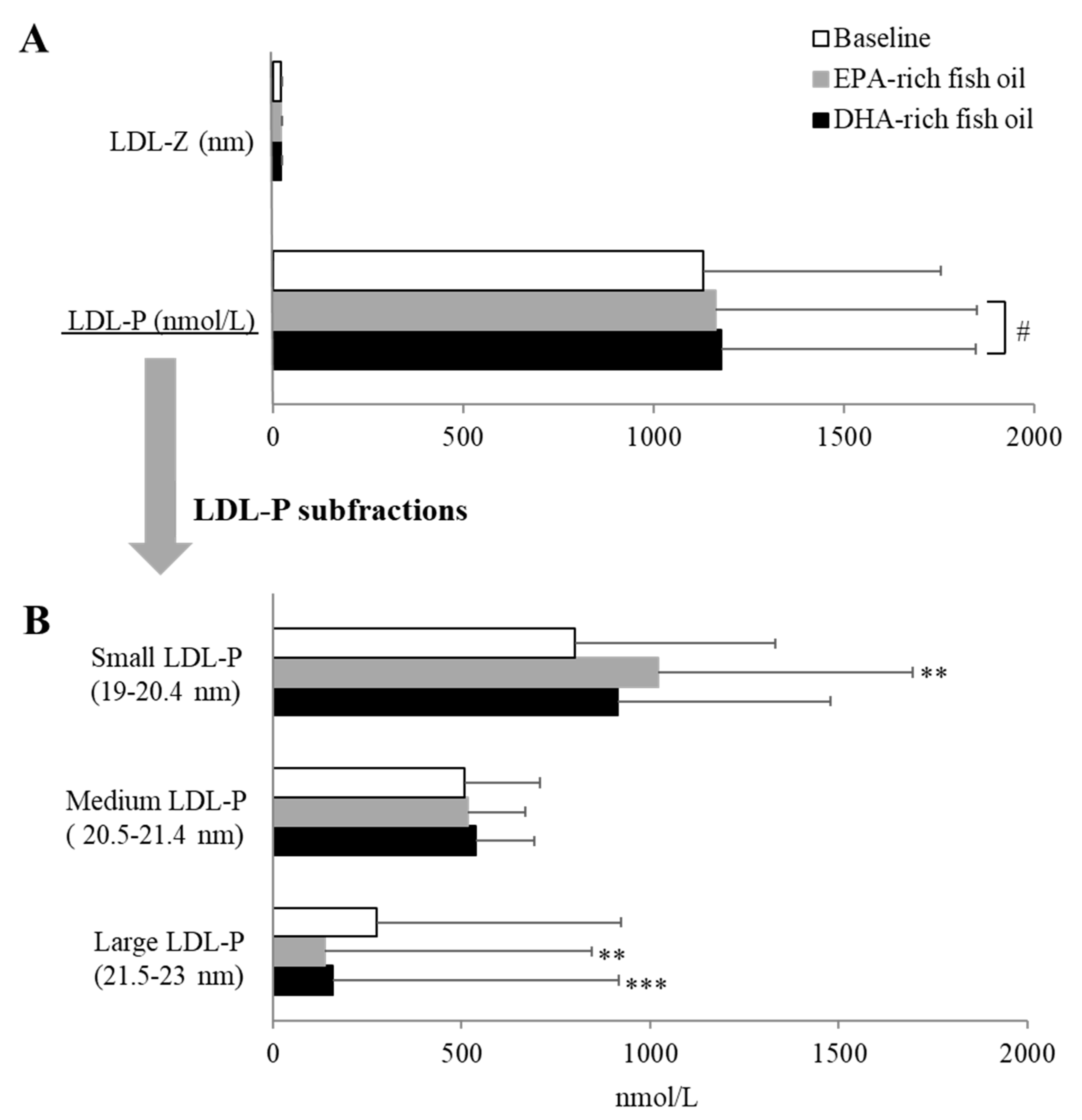