Long-Term Impact of Neonatal Intake of Oleanolic Acid on the Expression of AMP-Activated Protein Kinase, Adiponectin and Inflammatory Cytokines in Rats Fed with a High Fructose Diet
Previous Article in Special Issue

AVFQHNCQE is an antihypertensive nonapeptide obtained from a chicken foot protein hydrolysate. The present study aims to investigate the mechanisms involved in its blood pressure (BP)-lowering effect. Male (17–20 weeks old) spontaneously hypertensive rats (SHR) were used in this study. Rats were divided into two groups and orally administered water or 10 mg/kg body weight (bw) AVFQHNCQE. One hour post-administration, animals of both groups were intra-peritoneally treated with 1 mL of saline or with 1 mL of saline containing 30 mg/kg bw Nω-nitro-L-arginine methyl ester (L-NAME), an inhibitor of nitric oxide (NO) synthesis, or with 1 mL of saline containing 5 mg/kg bw indomethacin, which is an inhibitor of prostacyclin synthesis (n = 6 per group). Systolic BP was recorded before oral administration and six hours after oral administration. In an additional experiment, SHR were administered water or 10 mg/kg bw AVFQHNCQE (n = 6 per group) and sacrificed six hours post-administration to study the mechanisms underlying the peptide anti-hypertensive effect. Moreover, the relaxation caused by AVFQHNCQE in isolated aortic rings from Sprague-Dawley rats was evaluated. The BP-lowering effect of the peptide was not changed after indomethacin administration but was completely abolished by L-NAME, which demonstrates that its anti-hypertensive effect is mediated by changes in endothelium-derived NO availability. In addition, AVFQHNCQE administration downregulated aortic gene expression of the vasoconstrictor factor endothelin-1 and the endothelial major free radical producer NADPH. Moreover, while no changes in plasma ACE activity were observed after its administration, liver GSH levels were higher in the peptide-treated group than in the water group, which demonstrates that AVFQHNCQE presents antioxidant properties. View Full-Text
Keywords: bioactive peptide; endothelial dysfunction; blood pressure; bioactivity; nitric oxide; spontaneously hypertensive rats bioactive peptide; endothelial dysfunction; blood pressure; bioactivity; nitric oxide; spontaneously hypertensive rats
►▼ Show Figures 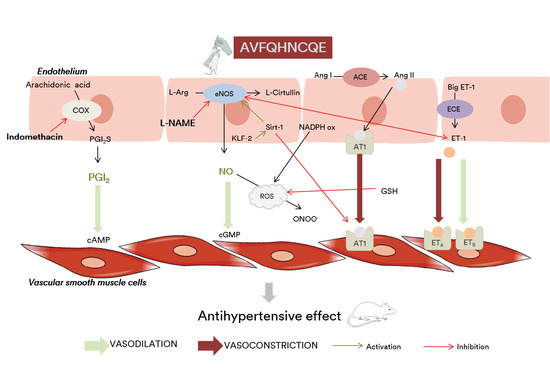 
Mas-Capdevila A, Iglesias-Carres L, Arola-Arnal A, Aragonès G, Aleixandre A, Bravo FI, Muguerza B. Evidence that Nitric Oxide is Involved in the Blood Pressure Lowering Effect of the Peptide AVFQHNCQE in Spontaneously Hypertensive Rats. Nutrients. 2019; 11(2):225. https://doi.org/10.3390/nu11020225