The Colorado River Basin (CRB) includes seven states and provides municipal and industrial water to millions of people across all major southwestern cities both inside and outside the basin. Agriculture is the largest part of the CRB economy and crop production depends on irrigation, which accounts for about 74% of the total water demand cross the region. A better understanding of irrigation water demands is critically needed as temperatures continue to rise and drought intensifies, potentially leading to water shortages across the region. Yet, past research on irrigation dynamics has generally utilized relatively low spatiotemporal resolution datasets and has often overlooked the relationship between climate and management decisions such as land fallowing, i.e., the practice of leaving cultivated land idle for a growing season. Here, we produced annual estimates of fallow and active cropland extent at high spatial resolution (30 m) from 2001 to 2017 by applying the fallow-land algorithm based on neighborhood and temporal anomalies (FANTA). We specifically focused on diverse CRB agricultural regions: the lower Colorado River planning (LCRP) area and the Pinal and Phoenix active management areas (PPAMA). Utilizing ground observations collected in 2014 and 2017, we found an overall classification accuracy of 88.9% and 87.2% for LCRP and PPAMA, respectively. We then quantified how factors such as climate, district water rights, and market value influenced: (1) annual fallow and active cropland extent and (2) annual cropland productivity, approximated by integrated growing season NDVI (iNDVI). We found that for the LCRP, a region of winter cropping and senior (i.e., preferential) water rights, active cropland productivity was positively correlated with cool-season average vapor pressure deficit (R = 0.72; p < 0.01). By contrast, for the PPAMA, a region of summer cropping and junior water rights, annual fallow and active cropland extent was positively correlated with cool-season aridity (precipitation/potential evapotranspiration) (R = 0.46; p < 0.05), and active cropland productivity was positively correlated with warm-season aridity (precipitation/potential evapotranspiration) (R = 0.42; p < 0.01). We also found that PPAMA cropland productivity was more sensitive to aridity when crop prices were low, potentially due to the influence of market value on management decisions. Our analysis highlights how biophysical (e.g., temperature and precipitation) and socioeconomic (e.g., water rights and crop market value) factors interact to explain seasonal patterns of cropland extent, water use and productivity. These findings indicate that increasing aridity across the region may result in reduced cropland productivity and increased land fallowing for some regions, particularly those with junior water rights. View Full-Text
Keywords: agriculture; fallow; irrigation; remote sensing; NDVI; temperature; precipitation; aridity; vapor pressure deficit; Google Earth Engine agriculture; fallow; irrigation; remote sensing; NDVI; temperature; precipitation; aridity; vapor pressure deficit; Google Earth Engine
►▼ Show Figures 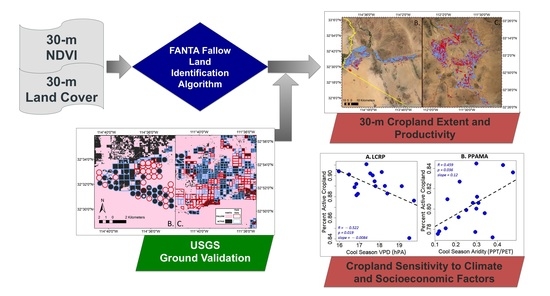