Differences in topographic structure, vegetation structure, and surface wetness exist between peatland classes, making active remote sensing techniques such as SAR and LiDAR promising for peatland mapping. As the timing of green-up, senescence, and hydrologic conditions vary differently in peatland classes, and in comparison with upland classes, full growing-season time series SAR imagery was expected to produce higher accuracy classification results than using only a few select SAR images. Both interferometric coherence, amplitude and difference in amplitude time series datasets were assessed, as it was hypothesized that these may be able to capture subtle changes in phenology and hydrology, which in turn differentiate classes throughout a growing season. Groups of variables were compared for their effectiveness in Random Forest classification for both Sentinel-1 and Radarsat-2. The Shapley value was used to determine the contribution of each group of variables in thirty scenarios, and Mean Decrease in Accuracy was compared to evaluate its ability to rank variables by relative importance. Despite being dual-pol, the results of classifications using Sentinel-1 coherence (12-day repeat) were significantly better than using fully polarimetric RADARSAT-2 coherence (24-day repeat), likely owing to the difference in baseline and specific acquisition dates of the data in this study. Overall, full growing season Sentinel-1 coherence time series produced higher accuracy results than fully polarimetric quad pol RADARSAT-2 coherence amplitude, difference in amplitude and polarimetric decomposition time series. Using a full growing season of time-series imagery in classification resulted in higher accuracy than using a few dates over a growing season. Using mean decrease in accuracy to rank and reduce variables resulted in a weaker classification than if the entire time series is used. View Full-Text
Keywords: InSAR; coherence; time series; peatland; classification; random forest; Shapley value InSAR; coherence; time series; peatland; classification; random forest; Shapley value
►▼ Show Figures 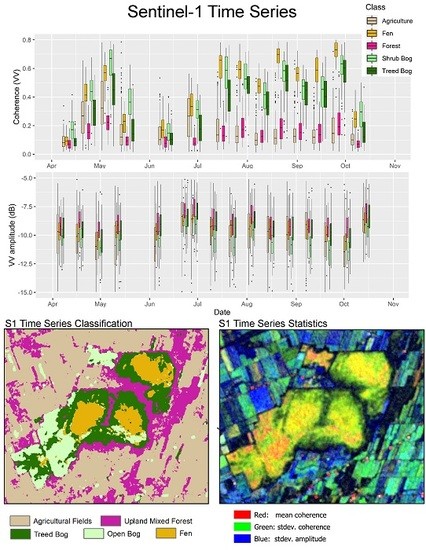