Fucoidans are sulfated polysaccharides found in the cell walls of brown algae. Common to all fucoidans is a high amount of L-fucose, yet their structures are complex and variable among different species [1]. Fucoidans have been described as exerting interesting pharmacological activities including, e.g., anti-inflammatory, antitumorigenic, and anti-angiogenic effects [1,2]. In particular, a fucoidan has been found to be potentially beneficial in age-related macular degeneration (AMD), the most common cause of blindness and severe vision loss in the Western world [3,4]. AMD is a disease of the elderly in which photoreceptors and retinal pigment epithelial cells of the macula, the area of high acuity vision, degenerate, and, in the more severe exudative subtype of the disease (wet AMD), vessels grow from the choroid under and into the retina. These immature vessels are leaky and lead to fluid accumulation and tissue destruction. The pathogenesis of AMD is complex and not fully elucidated. It is a multifactorial disease and several factors are involved in its pathogenesis. The most important ones are oxidative stress and, in wet AMD, the secretion of vascular endothelial growth factor (VEGF) by cells of the retinal pigment epithelium (RPE) [5,6,7]. Other factors such as impaired complement regulation, lipid dysregulation, and inflammation are also of importance for AMD development [8,9,10]. Currently, there is no cure for AMD, and the only treatment options are VEGF inhibitors, which need to be regularly injected in the eye [11]. Although these inhibitors have been a great progress in AMD therapy, long-term treatment usually cannot keep up the initial beneficial effects, and may lead to macular atrophy [12,13]. New treatment options would, therefore, be of great benefit.
Fucoidan could be of interest for the development of new AMD therapeutics, since it has been described to be anti-inflammatory, blood lipid-reducing and, most importantly, protective against oxidative stress and VEGF-inhibiting [4].
Our group has previously shown that commercially available fucoidan (from Fucus vesiculosus) exhibits interesting effects on RPE cells including reduction of VEGF secretion and reduction of angiogenesis [3]. However, the commercially available fucoidan is poorly defined, with pronounced variability in structural composition and degree of purity between batches [14,15]. Furthermore, fucoidans from different species differ in their composition and may thus exert different biological effects. This renders the search for the most suitable fucoidan for specific applications such as AMD an important quest [4,16].
In the current study, we compared the fucoidans of five species of brown algae (Saccharina latissima (SL), Laminaria digitata (LD), Fucus serratus (FS), Fucus vesiculosus (FV), and Fucus distichus subsp. evanescens (FE) in terms of two important factors for AMD development, i.e., oxidative stress and VEGF secretion in ocular cells, as well as their binding affinity to VEGF. For this comparison, the algal material of all five species were harvested in summer, identically prepared, and then extracted according to the same standardized protocol, leading to the fucoidans SL, LD, FS, FV, and FE.

The effect of the five different fucoidans on the secretion of VEGF was compared in two different RPE cell types, the human cell line ARPE19 and primary RPE cells derived from porcine eyes. Untreated ARPE19 cells secreted considerably and significantly less VEGF, with a mean of 416.33 pg/mL (±415.27), in a collection time of 24 h compared to primary porcine RPE cells, which secreted a mean of 2386.88 pg/mL (±824.81) (p < 0.001) in a collection time of 4 h, as tested in ANOVA and subsequent t-test.

In the pathogenesis of the exudative form of AMD, VEGF is an important factor [5,6]. VEGF inhibitors are currently used as a therapy standard [11]. As has been known for a long time that heparin and other sulfated polysaccharides have a high affinity for VEGF [20], fucoidans may not only reduce the secretion of VEGF but also directly antagonize its actions. Therefore, we investigated the binding affinity of fucoidans to VEGF in comparison to heparin, and aimed to identify those fucoidans with the strongest binding affinity to VEGF.
In the competitive VEGF binding assay used, the replacement of biotinylated heparin by the test compound was measured. At a concentration of 0.5 µg/mL, maximum binding of biotinylated heparin was achieved (data not shown). By adding increasing concentrations of unlabeled heparin, the detection of biotinylated heparin decreased (data not shown). As expected, incubation with a mixture of 0.5 µg/mL heparin and 0.5 µg/mL biotinylated heparin reduced the signal to 49.96% (±7.28) and thus the binding of biotinylated heparin to VEGF. All five fucoidans showed a significant affinity to VEGF compared to the control, tested in ANOVA and subsequent testing (SL 26.13 ± 13.46%; LD 28.57 ± 13.20%; FS 10.63 ± 6.43%; FV 21.27 ± 4.69% and FE 16.97 ± 9.91%) (Figure 7). Moreover, the three Fucus fucoidans bound significantly more strongly to VEGF than heparin (p < 0.01) (Table 5). Although FS and FE showed a slightly higher affinity, there were no significant differences between the five fucoidans (Table 5).

Fucoidans were extracted from dried stocks of the species Saccharina latissima (SL; Atlantic, Funningsfjord, Faroe Island), Fucus vesiculosus (FV; Baltic, Kiel Bay, Germany), Laminaria digitata (LD; Atlantic; Churchbay, Island ), Fucus distichus subsp. evanescens (FE; Baltic, Kiel Cana, Germany), and Fucus serratus (FS; Baltic, Kiel Bay, Germany), all harvested in summer and provided by Coastal Research & Management, Kiel, Germany. The fucoidans were extracted as previously described [53]. Briefly, the pulverized algal material was defatted by Soxhlet extraction with 99% (v/v) ethanol, and was then extracted with aqueous 2% calcium chloride for 2 h at 85 °C under reflux conditions. The supernatants of the raw extracts were concentrated and precipitated with ice-cold ethanol in a final concentration of 60% (w/w). After centrifugation, the sediments were dissolved in demineralized water, dialyzed, and lyophilized. In addition, commercially available fucoidan from Sigma (Sigma-Aldrich, Deisenhofen, Germany, F8190) was used. Fucoidan was solved in Ampuwa bidest (Fresenius, Schweinfurt, Germany), and then further diluted with appropriate cell medium for the cell experiments and phosphate buffered saline (PBS) for the VEGF binding assay, filtered through a 0.2 µm filter (Sarstedt, Nümbrecht, Germany), and applied to the cells in final concentrations of 1, 10, 50, and 100 µg/mL.

OMM-1 cells were treated with hydrogen peroxide (H2O2) to induce oxidative stress-related cell death, as previously shown [17]. As OMM-1 is a cancer cell line that may change its characteristics during subculture, we evaluated the appropriate concentrations of H2O2 resulting in approximately 50% cell viability. In order to assess this, OMM-1 cells were treated with different concentrations (100, 200, 400, 1000 mM) of H2O2 for 24 h and cell viability was investigated by MTS assay (see below). To investigate the potential protective effects of the different fucoidans, a concentration of 1 mM H2O2 was chosen. Cells were treated with fucoidan (1, 10, 50, and 100 µg/mL) 30 min prior to the application of H2O2.

Corresponding experiments to find the appropriate H2O2 concentration for ARPE19 cells revealed that none of the tested concentrations of H2O2 (100 µM, 200 µM, 400 µM, 1000 µM) induced a cell death of about 50% after 24 h, as detected by MTS assay. In addition, the cell death rate was highly variable after H2O2 incubation (see results). Therefore, we tested tert-Butyl hydroperoxide (TBHP), a more stable inducer of oxidative stress in RPE cells [33], at concentrations of 100 µM, 250 µM, and 500 µM, for 24 h and investigated cell viability by MTS assay, as described below. In order to investigate the potential protective effect of the different fucoidans, a concentration of 500 µM TBHP was chosen. Cells were treated with fucoidan 30 min prior to the insult.

MTT assay is a common method in cell research [54] and was conducted as previously described [3]. In brief, after treatment with the fucoidans, the cells were washed and incubated with 0.5 mg/mL MTT (dissolved in DMEM without phenol red). After removal and further washing of the cells, cells were lysed with dimethyl sulfoxide (DMSO) and the absorbance was measured at 550 nm with a spectrometer (Elx800, BioTek, Bad Friedrichshall, Germany).

The MTS assay is a commercially available viability assay and was used according to the manufacturers’ instructions (CellTiter 96® AQueous One Solution Cell Proliferation Assay (Promega, Mannheim, Germany)). The cell viability assay was performed in 96 well plates in phenol red-free medium with the same supplements described above. In each well, 20 µL of MTS solution was added for 1 h.

VEGF was detected in the supernatants of ARPE19 and primary RPE cells using commercially available ELISA kits (R&D Systems, Wiesbaden, Germany) according to the manufacturer’s instructions. To establish the parameters of VEGF ELISA, we investigated time-dependent VEGF secretion in ARPE19 and primary RPE cells in the presence and absence of commercially available fucoidan from Fucus vesiculosus (Sigma-Aldrich, F8190) for 1 day, 3 days, and 7 days. A cell viability assay (MTT) was conducted after 7 days. According to these results, an incubation time of 3 days was chosen for experiments with the five different fucoidans. The medium was changed 24 h prior in ARPE19 cells and 4 h prior in primary RPE cells and the supernatant collected. Measured VEGF content was normalized for cell survival and is depicted in relation to that of untreated control cells.

The affinity to VEGF of the test compounds was investigated with a competitive VEGF-binding assay using biotinylated heparin. In addition to the fucoidans, heparin (EDQM, no. Y0001282, Strasbourg, France) was tested.
The wells of a 96-well Nunc-Immuno MaxiSorp microplate (Sigma-Aldrich, Deisenhofen, Germany) were coated with 0.1 µg recombinant human VEGF 165 (R&D Systems Cat. 293-VE/CF) dissolved in 100 µL PBS overnight at 4 °C. After washing with PBS, the coated wells were blocked for 90 min at 37 °C with 100 µL of 5 mg/mL bovine serum albumin (BSA, dissolved in PBS) and subsequently washed three times with PBS. During the blocking, 65 µL of 1 µg/mL heparin, biotin conjugate (Merck, Darmstadt, Germany) in PBS, and 65 µL of 1 µg/mL test compounds in PBS were preincubated at 4 °C. For the blank and the 100% binding value, 100 µL PBS and 100 µL of 0.5 µg/mL biotinylated heparin in PBS, respectively, were preincubated at 4 °C. Aliquots of 100 µL of these solutions were pipetted into the coated microplate wells and incubated for 2 h at 37 °C with gentle agitation. After three washing steps, 100 µL of streptavidin alkaline phosphate conjugate (Southern Biotech/, Birmingham, AL, USA, stock solution diluted 1:3000 with PBS) was incubated for 1 h at 37 °C with gentle agitation. The next steps involved three washings with PBS and incubation with 100 µL p-nitrophenyl phosphate substrate system (Sigma-Aldrich, Deisenhofen, Germany) for 30 min in the dark. The reaction was stopped by addition of 25 µL 3 N NaOH, and the absorbance was measured at 405 nm. Blank values in the absence of biotinylated heparin were subtracted from the measured values. The reduction of the binding of biotinylated heparin by the test compounds is indicated as a percentage in relation to the binding of the biotinylated heparin alone.

All experiments testing fucoidans were independently repeated at least six times, experiments for establishing oxidative stress response were repeated at least three times, and the VEGF binding experiments were performed in duplicates on three different days. Statistics were calculated using Statistica 7 (Statsoft, Tulsa, OK, USA) and Microsoft Excel (Excel 2010, Microsoft, Redmond, WA, USA). A Friedman’s ANOVA was performed, and, if a significant difference between groups was detected, a subsequent Student’s t-test was conducted. A p value of <0.05 was considered significant. All bars represent mean and standard deviation.

The research was funded by EU InterReg Deutschland–Denmark and the European Regional Development Fund, Project FucoSan, grant number 39-1.0-16. AK was funded by the Hermann–Wacker Foundation.

This study is part of the FucoSan–Health from the Sea project and is supported by EU InterReg Deutschland–Denmark and the European Regional Development Fund. We especially thank Coastal Research & Management, Kiel, for the provision of the algae. 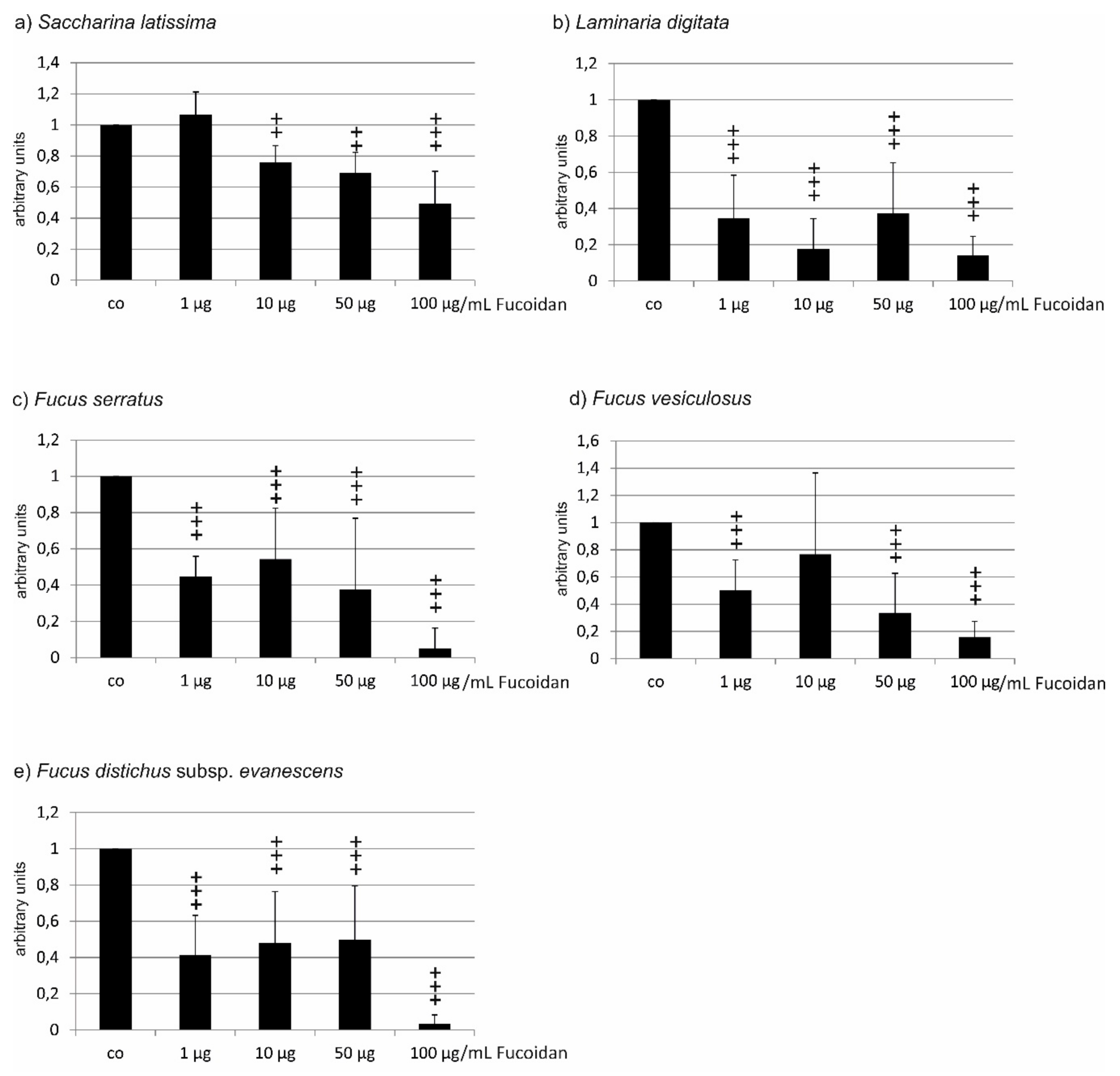 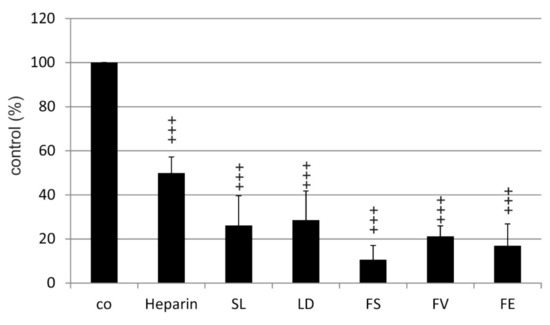