Reproduction of the Androgenetic Population of the Asian Corbicula Clam (Bivalvia: Cyrenidae) in the Northern Dvina River Basin, Russia

Permafrost peatlands, containing a sizable amount of soil organic carbon (OC), play a pivotal role in soil (peat) OC transformation into soluble and volatile forms and greatly contribute to overall natural CO2 and CH4 emissions to the atmosphere under ongoing permafrost thaw and soil OC degradation. Peat microorganisms are largely responsible for the processing of this OC, yet coupled studies of chemical and bacterial parameters in permafrost peatlands are rather limited and geographically biased. Towards testing the possible impact of peat and peat pore water chemical composition on microbial population and diversity, here we present results of a preliminary study of the western Siberia permafrost peatland discontinuous permafrost zone. The quantitative evaluation of microorganisms and determination of microbial diversity along a 100 cm thick peat soil column, which included thawed and frozen peat and bottom mineral horizon, was performed by RT-PCR and 16S rRNA gene-based metagenomic analysis, respectively. Bacteria (mainly Proteobacteria, Acidobacteria, Actinobacteria) strongly dominated the microbial diversity (99% sequences), with a negligible proportion of archaea (0.3–0.5%). There was a systematic evolution of main taxa according to depth, with a maximum of 65% (Acidobacteria) encountered in the active layer, or permafrost boundary (50–60 cm). We also measured C, N, nutrients and ~50 major and trace elements in peat (19 samples) as well as its pore water and dispersed ice (10 samples), sampled over the same core, and we analyzed organic matter quality in six organic and one mineral horizon of this core. Using multiparametric statistics (PCA), we tested the links between the total microbial number and 16S rRNA diversity and chemical composition of both the solid and fluid phase harboring the microorganisms. Under climate warming and permafrost thaw, one can expect a downward movement of the layer of maximal genetic diversity following the active layer thickening. Given a one to two orders of magnitude higher microbial number in the upper (thawed) layers compared to bottom (frozen) layers, an additional 50 cm of peat thawing in western Siberia may sizably increase the total microbial population and biodiversity of active cells. View Full-Text
Keywords: permafrost; peat; pore water; bacteria; number; metabolism; active layer permafrost; peat; pore water; bacteria; number; metabolism; active layer
►▼ Show Figures 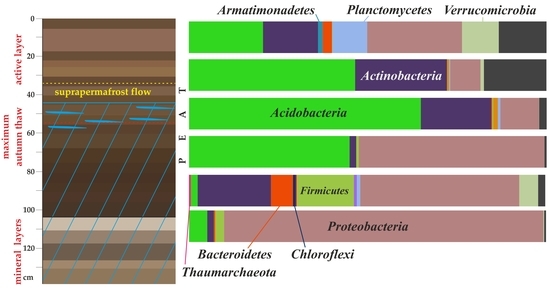