Quercus variabilis Blume is one of the most ecologically valuable tree species in China and is known to have adaptive mechanisms to climate change. Our objective was to quantify the variation pattern in the fruit morphology of Q. variabilis. Fruit samples were collected from 43 natural populations in autumn of 2019. Our results indicated that the coefficient of variation (CV) of the fruit length (FL) and fruit width (FW) were 10.08% and 11.21%, respectively. There were significant differences in the FL, FW, and fruit length-to-width ratios (FL/FW) among the studied populations. Also, there was a significant positive correlation between the FW and FL. The FL decreased with increasing precipitation in the wettest quarter (PWQ). A concave trend was observed in the variations in FL with the equivalent latitude (ELAT), longitude (LON), annual mean air temperature (MAT), and annual precipitation (AP). A similar concave trend was observed for the FL/FW with LON, MAT, and AP. A positive correlation was observed between the FW, FL and FL/FW, and the ELAT. The cluster analysis revealed five groups of the 43 natural populations. Our study findings suggests that Q. variabilis has high levels of phenotypic plasticity for geographical and climatic factors. View Full-Text
Keywords: climate factor; equivalent latitude; longitude; fruit size; oak climate factor; equivalent latitude; longitude; fruit size; oak
►▼ Show Figures 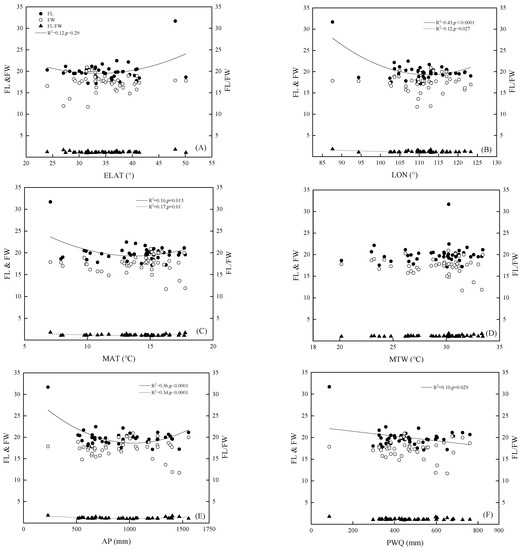