Neutrophil Adaptations upon Recruitment to the Lung: New Concepts and Implications for Homeostasis and Disease
Next Article in Special Issue

Metals are critical cellular elements that are involved in a variety of cellular processes, with recent literature demonstrating that zinc, and the synaptic zinc transporter (ZnT3), are specifically involved in learning and memory and may also be key players in age-related neurodegenerative disorders such as Alzheimer’s disease. Whilst the cellular content and location of metals is critical, recent data has demonstrated that the metalation state of proteins is a determinant of protein function and potential toxicity. As we have previously reported that ZnT3 knockout (KO) mice have deficits in total zinc levels at both 3 and 6 months of age, we were interested in whether there might be changes in the metalloproteomic profile in these animals. To do this, we utilised size exclusion chromatography-inductively coupled plasma mass spectrometry (SEC-ICP-MS) and examined hippocampal homogenates from ZnT3 KO and age-matched wild-type mice at 3, 6 and 18 months of age. Our data suggest that there are alterations in specific metal binding proteins, for zinc, copper and iron all being modulated in the ZnT3 KO mice compared to wild-type (WT). These data suggest that ZnT3 KO mice may have impairments in the levels or localisation of multiple transition metals, and that copper- and iron-dependent cellular pathways may also be impacted in these mice.
Keywords: Zinc; ZnT3; Alzheimer’s disease; metals; ageing Zinc; ZnT3; Alzheimer’s disease; metals; ageing

One of the key cellular processes that becomes dysregulated with age and participates both directly and indirectly in age-related dysfunction, is metal homeostasis [1,2,3]. Zinc is one such metal that is critical for the activity of a variety of enzymes, transcription factors and cellular processes, the levels of which are tightly controlled by a family of zinc import/export proteins that have a distinct pattern of cellular and tissue localization as well as expression [4,5]. These principally comprise the zinc transporter (ZnT) and zinc-regulated and iron-regulated transporter proteins (ZIPs), as well as other zinc “handling” proteins such as metallothioneins. Approximately 10%–15% of brain zinc exists as chelatable zinc primarily within synaptic vesicles at glutamatergic synapses, highlighting its importance in synaptic plasticity/cognition. Our discoveries highlighted the critical importance of this pool of zinc, and the synaptic zinc transporter (ZnT3 (SLC30A3)), in cognition [6,7,8,9]. Specifically, we reported that there were age-dependent deficits in learning and memory in the ZnT3 knockout (KO) mice that were manifest at 6 months of age (but not at 3 months), and which were associated with significant deficits in a suite of key hippocampal proteins involved in learning and memory. The ZnT3 KO mice also had significantly decreased hippocampal zinc levels at both 3 (−39%) and 6 (−32%) months of age compared to age-matched wild-type (WT) mice, which whilst of greater magnitude than initially reported for the whole brain, is consistent with our focus on the hippocampus and the loss of the synaptic vesicular zinc pool [10,11,12,13].
Whilst such a bulk change in metals may be important, it is also known that the complement of metals associated with a given protein is important and can affect protein function, as in the case of Cu/Zn-superoxide dismutase (SOD1) [14]. In order to gain further insight into the metalloproteome in the ZnT3 KO mice, we utilised size-exclusion inductively coupled plasma mass spectrometry (SEC-ICP-MS) to examine hippocampal homogenates from ZnT3 KO and age-matched WT mice at 3, 6 and 18 months of age. This SEC-ICP-MS technique allows for the chromatographic separation of proteins from complex mixtures using a size exclusion column (SEC) and the subsequent assessment of the elemental content of those fractions using inductively coupled plasma mass spectrometry (ICPMS). This gives rise to an elution profile (the chromatogram) where the peaks represent the metal content of protein/s of a given molecular weight.

All animal experimentation procedures were approved by the Florey Institute of Neuroscience Animal Ethics Committee and conducted in accordance with the Prevention of Cruelty to Animals Act and the NH&MRC Code of Practice for the Use of Animals for Scientific Purposes.

SEC-ICP-MS analysis was performed using the previously described method [15]. Whole brain tissue samples were homogenized by probe sonication (3 rounds of sonication for 15 seconds on ice, 40% amplitude) in 1 mL of homogenization buffer (Dulbecco’s PBS with EDTA free proteinase inhibitor cocktails 2 and 3; 1:500; Roche) and centrifuged at 100,000× g for 30 minutes at 4 °C. The supernatant was collected, and both the pellet and supernatant were stored at −80 °C until further use. Samples of 100 µg of soluble protein were chromatographically separated using a BioSEC-3 column 3 μm, 4.6 × 300 mm (pore size 150 Å, MW range 0.5–150 kDa) (Agilent, VIC, Australia) with 200 mM ammonium nitrate containing internal standard (133Cs, 121Sb; 10 μg L−1 each) at a flow rate of 0.4 mL/min. The HPLC was directly connected to a MicroMist nebulizer (Glass Expansion, Australia) fitted to an Agilent technologies 7700 ICP-MS. Helium was used as the collision gas with all elements. The following elements were analysed: 56Fe, 63Cu and 66Zn. Baseline correction of the traces was conducted by subtracting the average of the first 50 data points which represents the background contribution of metal from the LC system and buffer combined. The peaks of the SEC chromatographs were integrated base on time as the peaks were not baseline resolved. The start and stop of the integration is marked on the 3 month time point graph in each of the figures.

Statistical analysis was carried out using Prism 8 (Graph-Pad) software. Before application of a one-way ANOVA with Sidak’s multiple comparisons correction, we tested if the data were consistent with a sampling from a normal Gaussian distribution using the Shapiro-Wilk test [16]. The limited group sizes required that the data were not separated by gender. However, as there have been differences reported in behavioural phenotypes across males and females in the ZnT3 KO mice [17], future studies should be sufficiently powered to assess whether gender also presents a confound at the level of the metalloproteome.

The Florey Institute of Neuroscience and Mental Health acknowledge the strong support from the Victorian Government and in particular the funding from the Operational Infrastructure Support Grant. 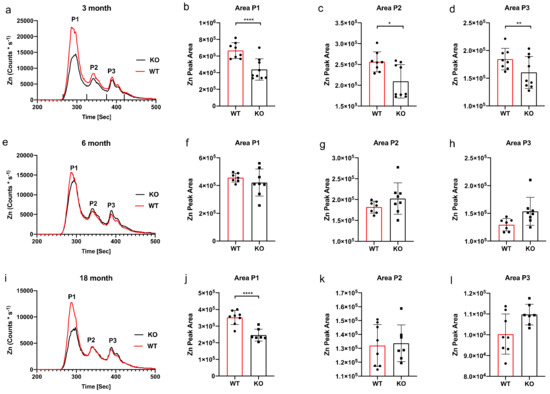