Biomolecules of 2-Thiouracil, 4-Thiouracil and 2,4-Dithiouracil: A DFT Study of the Hydration, Molecular Docking and Effect in DNA:RNAMicrohelixes
Previous Article in Special Issue

Can Epigenetics of Endothelial Dysfunction Represent the Key to Precision Medicine in Type 2 Diabetes Mellitus?

During the last two decades, several international consortia have been established to unveil the molecular background of human cancers including gliomas. As a result, a huge outbreak of new genetic and epigenetic data appeared. It was not only shown that gliomas share some specific DNA sequence aberrations, but they also present common alterations of chromatin. Many researchers have reported specific epigenetic features, such as DNA methylation and histone modifications being involved in tumor pathobiology. Unlike mutations in DNA, epigenetic changes are more global in nature. Moreover, many studies have shown an interplay between different types of epigenetic changes. Alterations in DNA methylation in gliomas are one of the best described epigenetic changes underlying human pathology. In the following work, we present the state of knowledge about global DNA methylation patterns in gliomas and their interplay with histone modifications that may affect transcription factor binding, global gene expression and chromatin conformation. Apart from summarizing the impact of global DNA methylation on glioma pathobiology, we provide an extract of key mechanisms of DNA methylation machinery. View Full-Text
Keywords: chromatin; CpG; cytosine; DNA methylation; G-CIMP; glioblastoma; glioma; histone; IDH chromatin; CpG; cytosine; DNA methylation; G-CIMP; glioblastoma; glioma; histone; IDH
►▼ Show Figures 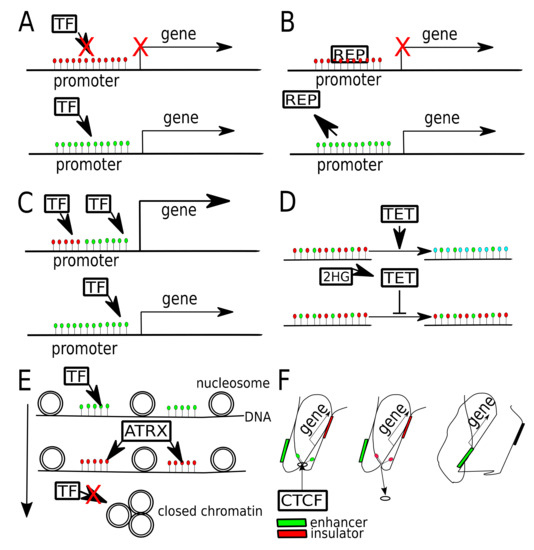