Peach, Apple, and Pear Fruit Quality: To Peel or Not to Peel?

:
The nutritional value of the peeled and unpeeled fruit (peel plus flesh tissues) was studied using four peach (Prunus persica L.; Red Heaven, Maria Blanca, Big Top, and Queen Giant), two pear (Pyrus communis L.; Santa Maria, Pyrus pyrifolia N.; Nashi), and three apple (Malus domestica Borkh.; Gala, Granny Smith, and Red Chief) cultivars. Based on principal components analysis (PCA) models, there was a clear differentiation among the cultivars’ and the peeled fruits’ nutritional characteristics in comparison to the unpeeled ones. Increased antioxidant capacity and content of total phenols and flavonoids of peaches (Red Heaven and Maria Blanca) versus nectarines (Big Top and Queen Giant) were recorded. In contrast, nectarines were characterized by higher hydroxycinnamates and dry matter. The apples’ cultivar Granny Smith exhibited a high level of titratable acidity (TA), while the Gala displayed a high level of soluble solids concentration (SSC), carotenoids, dry matter, hydroxycinnamic acids, and flavonols at the unpeeled fruit, whereas the Red Chief by increased anthocyanins, antioxidant capacity, total phenols, and flavonoids. Nashi pears with peel were more beneficial due to the strong skin contribution in the fruits’ beneficial compounds content. The peel of the Granny Smith cultivar was associated with an increased level of P, K, Ca, and Mg, whereas that of Red Chief with increased anthocyanins and Mg content.
Keywords:
peeling; peach; apple; pear; antioxidants; nutrients; fruit quality

Diets high in fruits are widely recommended for their health-promoting properties [1]. Particularly, apple, pear, and peach are economically important fruits that are highly appreciated by consumers worldwide. At the peel tissue of these fruits, bacteria or other microorganisms harmful to human health could be developed as well as high concentrations of pesticide residues might be detected [2,3]. Despite the fact that peel is burdened with these accuses, it plays the role of the physical barrier between the environment and fruits, developing mechanisms of response to different stresses such as the anthocyanin accumulation [4,5].
It is widely accepted that several beneficial substances (e.g., flavonoids, hydroxycinnamic acids, flavonols, anthocyanins, carotenoids) are highly accumulated in the peel compared to flesh tissue of various fruits, including peaches [6,7,8,9], pears [10,11], and apples [12,13,14]. It has been also reported that the peel tissue of these fruit species accumulates higher content of minerals such as Ca, Mg, P, Fe, Mn, Zn than the flesh tissue [15,16,17,18]. Although the increased content of these beneficial compounds at the peel is well documented, the contribution of the peel to the nutritional value has not been fully deciphered at the high commercial fruit species, including peaches, pears, and apples. Thus, the aim of this study was to characterize the differences in quality, antioxidant-related traits, and nutrient elements between peeled and unpeeled fruits of various peach, pear, and apple cultivars.

Fruits of three different species, namely peach, apple, and pear were collected at the commercial harvest stage and subsequently stored at 1 °C for two weeks (peach) or two months (apple and pear). Regarding the peach study, the cultivars, Red Heaven (yellow-flesh), Maria Blanca (white-flesh), Big Top (yellow-flesh nectarine,) and Queen Giant (white-flesh nectarine) were used. Further, three apple (Gala, Granny Smith, Red Chief) and two pear (Santa Maria (Pyrus communis L.) and Nashi (Pyrus pyrifolia N.)) cultivars were tested. Immediately after the cold storage, ten fruits of each cultivar without any visual defects or decay were selected. Each individual fruit was divided into four quarters, and the two opposite quadrants were peeled (named peeled), and the other two quadrants remained unpeeled (named unpeeled). One part of the two quadrants of the unpeeled or peeled fruit was used for soluble solids concentration (SSC) and titratable acidity (TA) determination, while another part was used for dry matter measurement, and the rest of the part was used for the biochemical analyses.

Fruit soluble solids concentration (SSC) was determined at 1 mL fruit juice supernatant of peeled or unpeeled fruit, after juice centrifugation at 10,000× g for 10 min at 4 °C, using a refractometer (model ATAGO, digital hand-held pocket refractometer PAL-1, ATAGO Japan). Titratable acidity (TA) was determined at unpeeled or peeled fruit juice based on juice acidity neutralization. In a glass jar, 100 mL of dH2O were mixed with 1mL juice supernatant and titrated with 0.01 N NaOH under continuous stirring and pH-measurement (model Hanna inst. HI8424, with probe HI 1230) until the endpoint of pH 8.2. SSC was expressed as percentage Brix and TA as was expressed as percentage malic acid based on the standard curve of known malic acid concentrations.

The dry weight of peeled or unpeeled fruit was determined after tissue heating at 65 °C in an oven until full internal water evaporation and constant weight acquisition (at least for three days). Dry weight was expressed as the percentage of fresh fruit tissues.

For all data, the statistical analysis was conducted using SPSS (SPSS v23.0., Chicago, IL, USA). T-test analysis between peeled and unpeeled fruits with a significance level P ≤ 0.05 was carried out. Fold-change was based on log2 of the ratio of unpeeled to peeled fruit. Additionally, a 95% lower and upper bound of the confidence interval in individual fruits was carried out in a one-way ANOVA. If the ratio of the logarithm was 95% lower, and the upper confidence interval was positive, then increased values of the unpeeled fruit relative to the peeled for this variable and cultivar was indicated, while a negative presence indicated decreased values in this variable and cultivar. In the cases of a positive presence for the 95% upper confidence interval and negative for the lower or the inverse, then there was no clear change of this parameter for this cultivar. The principal components analysis (PCA) was carried out between a peeled and unpeeled peach, apple, and pear fruits, as well as for the ratio of the logarithm of unpeeled to peeled to detect simple patterns and differences. The Kaiser–Meyer–Olkin (KMO > 0.6) measure of sampling adequacy and Bartlett’s test of sphericity (<0.001) were used as indicators in the PCA model’s construction, according to Michailidis [28,29]. Variable with extraction under 0.5 were rejected to avoid the low representation of variables in the PCA model.

3.3. Physio-Biochemical Attributes and Nutrient Content of the Unpeeled to Peeled Fruits

The physio-biochemical attributes and nutrient content log-ratios between unpeeled and peeled fruits from all cultivars were fitted in a PCA model (Figure 4).
The analysis of the log-ratios (unpeeled to peeled) of all variables (5 physio-biochemical and 5 element variables) among all cultivars (Figure 4B) with the total variance explained by the PCA model to be 79.2%, in the PC1 explained the variance of 39.1%, in the PC2 the variance of 25.5%, and in the PC3 the variance of 14.5 (Figure 4A). Changes in the PC1 scores were associated with the separation of Nashi (positive values) and Santa Maria (negative values) pears according to biochemical factors (e.g., antioxidant capacity, total phenols, flavonoids, and carotenoids) and elements (e.g., Cu, K, Ca; Figure 4A). PC2 was closely linked to P, K, and Mg (positive values; Figure 4A). PC3 scores were associated with anthocyanins and Mg (positive values) and carotenoids (negative values; Figure 4A). There was a clear separation in PC1 between Nashi (positive values) and Santa Maria (negative values), indicating an increase in the variables (i.e., antioxidant capacity, total phenols, flavonoids, carotenoids, Ca) in the unpeeled to peeled fruit, and a decrease in potassium and copper in Nashi pears; (Figure 4A). The Granny Smith fruit was clearly separated from the other apple cultivars based on PC2 having an increase in unpeeled to peeled log-ratio in P, K, Ca, and Mg (Figure 4A). Similarly, the cultivars Red Chief and Gala (positive values) were clearly separated from the other cultivars based on PC3, with Red Chief having a more uniform variance and a better separation than Gala, which depicted an increased log-ratio of unpeeled to peeled in anthocyanins and Mg (Figure 4A).

From the current study, it was suggested that fruits (apart from Santa Maria) would be more beneficial when consumed with their peel, as discarding this part means great beneficial substance loss. The PCA models indicated a clear separation of the cultivars’ inner-genus and between unpeeled and peeled fruits inner-cultivar. In peaches versus nectarines, an increase in antioxidant capacity, total phenols, flavonoids, and minerals was recorded, contrary to nectarines, in which an increase in hydroxycinnamate and dry weight was observed. Santa Maria versus Nashi cultivars exhibited an increase in four biochemical traits, minerals, and TA, in contrast to Nashi, which exhibited an increase in SSC, K, and dry matter. In the Granny Smith cultivar, an increase in TA was observed; in Gala, an increase in SSC, carotenoids, dry weight, hydroxycinnamic acids, flavonols, and minerals were recorded; and in the unpeeled fruit of Red Chief an increase in anthocyanins, antioxidant capacity, total phenols, and flavonoids was observed. We also would propose the consumption of unpeeled pear Nashi, as the peel contribution in unpeeled fruits more effectively increased the beneficial compounds’ uptake than the peeled one. The unpeeled Granny Smith fruits were associated with an increased uptake of mineral elements. The unpeeled fruits of Red Chief were associated with an increased uptake of anthocyanins and Mg. 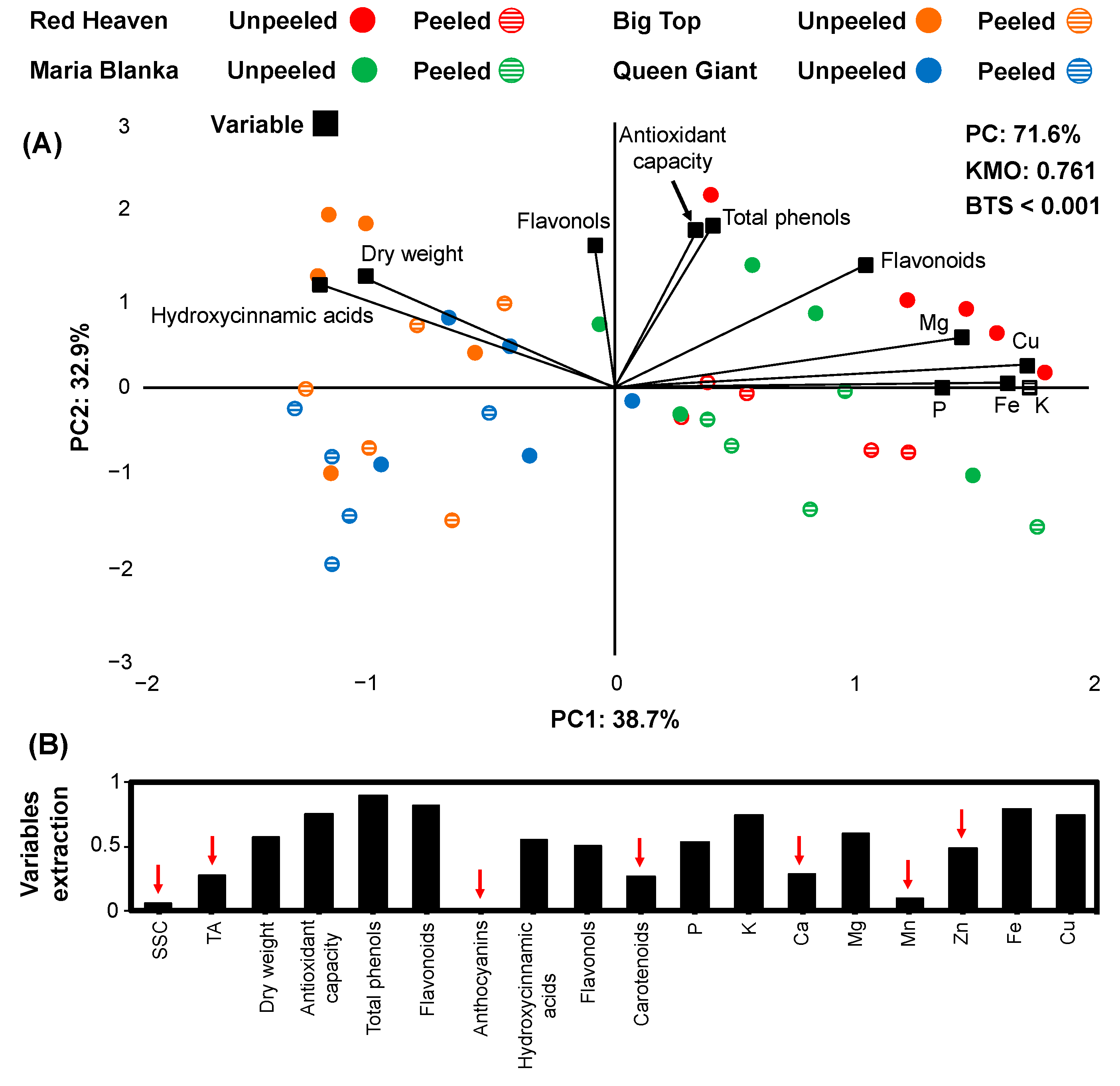 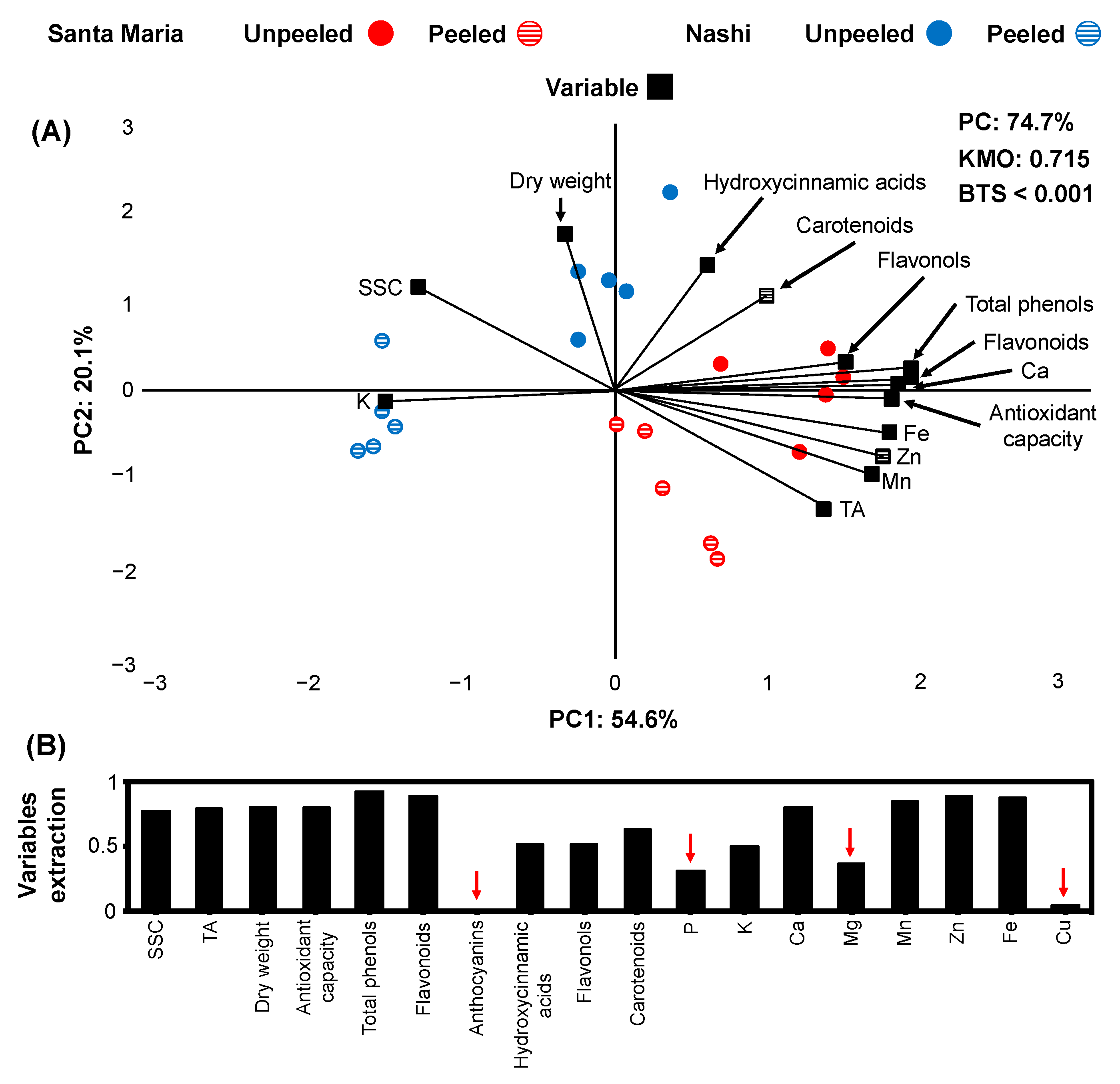 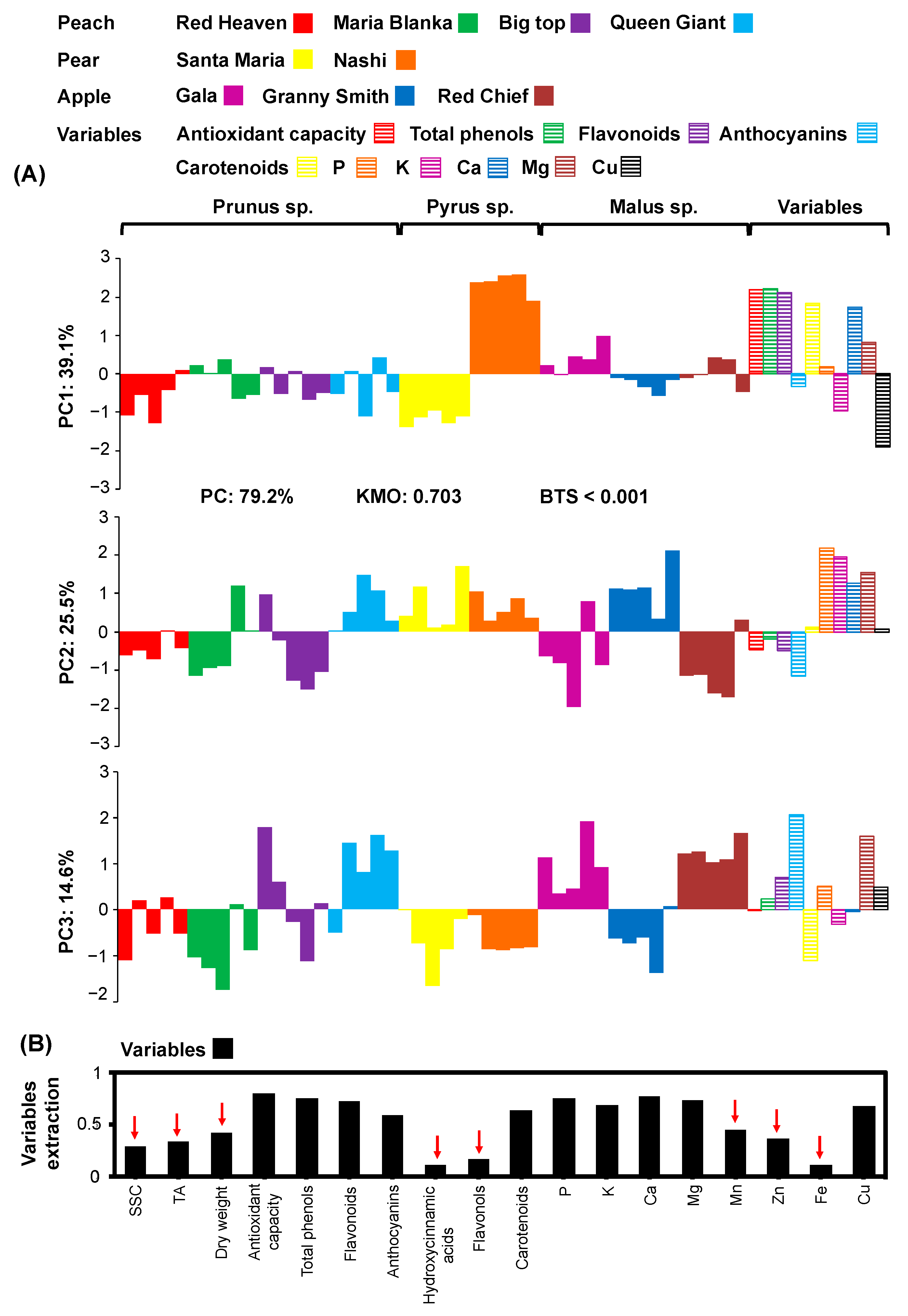