Farmers’ Knowledge, Perception and Practices in Apple Pest Management and Climate Change in the Fes-Meknes Region, Morocco
Next Article in Special Issue

The Effect of Environment and Nutrients on Hydroponic Lettuce Yield, Quality, and Phytonutrients
Previous Article in Journal

For fruit tree (Prunus) species, flower bud dormancy completion determines the quality of bud break and the flowering time. In the present climate change and global warming context, the relationship between dormancy and flowering processes is a fundamental goal in molecular biology of these species. In almond [P. dulcis (Miller) Webb], flowering time is a trait of great interest in the development of new cultivars adapted to different climatic areas. Late flowering is related to a long dormancy period due to high chilling requirements of the cultivar. It is considered a quantitative and highly heritable character but a dominant gene (Late bloom, Lb) was also described. A major QTL (quantitative trait loci) in the linkage group (LG) 4 was associated with Lb, together with other three QTLs in LG1 and LG7. In addition, DAM (Dormancy-Associated MADS-Box) genes located in LG1 have been largely described as a gene family involved in bud dormancy in different Prunus species including peach [P. persica (L.) Batsch] and Japanese apricot (P. mume Sieb. et Zucc.). In this work, a DAM transcript was cloned and its expression was analysed by qPCR (quantitative Polymerase Chain Reaction) in almond flower buds during the dormancy release. For this purpose two almond cultivars (‘Desmayo Largueta’ and ‘Penta’) with different chilling requirements and flowering time were used, and the study was performed along two years. The complete coding sequence, designated PdDAM6 (Prunus dulcis DAM6), was subjected to a phylogenetic analysis with homologous sequences from other Prunus species. Finally, expression dynamics analysed by using qPCR showed a continuous decrease in transcript levels for both cultivars and years during the period analysed. Monitoring almond flower bud dormancy through DAM expression should be used to improve almond production in different climate conditions. View Full-Text
Keywords: flowering; breeding; chilling requirements; qPCR; transcription; cloning flowering; breeding; chilling requirements; qPCR; transcription; cloning
►▼ Show Figures 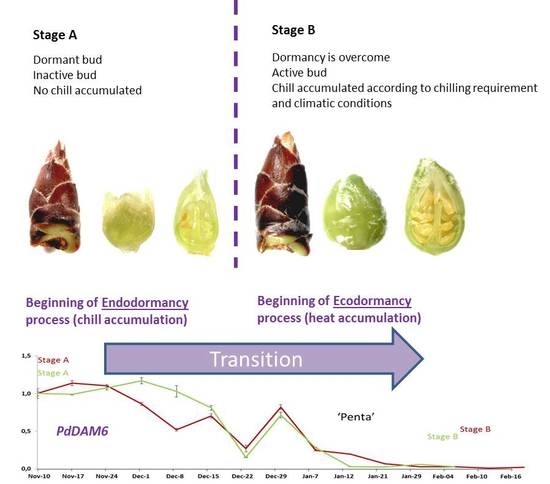